A gravity well or gravitational well is a conceptual model of the gravitational field surrounding a body in space – the more massive the body, the deeper and more extensive the gravity well associated with it. The Sun is very massive, relative to other bodies in the Solar System, so the corresponding gravity well that surrounds it appears "deep" and far-reaching. The gravity wells of asteroids and small moons, conversely, are often depicted as very shallow. Anything at the center of mass of a planet or moon is considered to be at the bottom of that celestial body's gravity well, and so escaping the effects of gravity from such a planet or moon (to enter outer space) can be likened to "climbing out of the gravity well". The deeper a gravity well is, the more energy any space-bound "climber" must use to escape it.

In astrophysics, a gravity well is specifically the gravitational potential field around a massive body. Other types of potential wells include electrical and magnetic potential wells. Physical models of gravity wells are sometimes used to illustrate orbital mechanics. Gravity wells are frequently confused with embedding diagrams used in general relativity theory, but the two concepts are distinctly separate and not directly related.

Plot of a two-dimensional slice of the gravitational potential in and around a uniformly dense, spherically symmetric body. 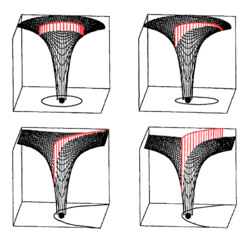 This image shows the four trajectory categories with the gravitational potential well (gravity well) of the central mass's field of potential energy shown in black and the height of the kinetic energy of the moving body shown in red extending above that, correlating to changes in speed as distance changes according to Kepler's laws.

If G is the universal gravitational constant (G = 6.67×10−11 m3 kg−1 s−2), the external gravitational potential of a spherically symmetric body of mass M at the location described by the displacement vector [math]\displaystyle{ \mathbf{x} }[/math] from the center of mass of the body, is given by the formula:

A plot of this function in two dimensions is shown in the figure. This plot has been completed with an interior potential proportional to |x|2, corresponding to an object of uniform density, but this interior potential is generally irrelevant since the orbit of a test particle cannot intersect the body.

The potential function has a hyperbolic cross section; the sudden dip in the center is the origin of the name "gravity well". A black hole would not have this "closing" dip due to its size being only determined by its event horizon.

There are several sources of inaccuracy in this model:

where Φ(x) is the gravitational potential and ρ(x) is the mass density. Thus a massive object placed on a rubber sheet will deform the sheet into a shape, that, to a first approximation, depicts correctly the gravity well in 2-dimensional space (not correctly, however, for 3-dimensional space). A second test object placed near the first will gravitate toward it in an approximation of the correct force law. 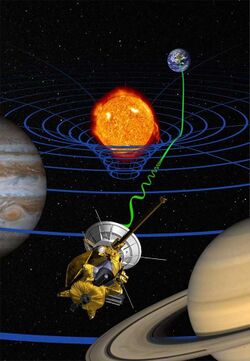 A type of embedding diagram that depicts general relativity's curvature of space. Although analogous, this does not depict the Sun's gravity well.

Embedding takes merely a shape, but a potential plot has a distinguished "downward" direction. Turning a gravity well "upside down" by negating the potential of the attractive force, turns it into a repulsive force. However, turning a Schwarzschild embedding upside down, by rotating it, has no effect, since it leaves its intrinsic geometry unchanged. Also, geodesics following across the Schwarzschild surface would bend toward the central mass like a ball rolling in a gravity well, but for entirely different reasons. There is no analogy of the Schwarzschild embedding for a repulsive field though such a field is modeled in general relativity, the spatial geometry cannot be embedded in three dimensions.

The Schwarzschild embedding is commonly drawn with a hyperbolic cross section like the potential well, but in fact it has a parabolic cross section which, unlike the gravity well, does not approach a planar asymptote. See Flamm's paraboloid.