Short description: Physical constant relating the gravitational force between objects to their mass and distance 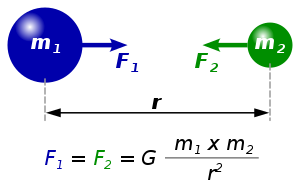 The gravitational constant G is a key quantity in Newton's law of universal gravitation.

In Newton's law, it is the proportionality constant connecting the gravitational force between two bodies with the product of their masses and the inverse square of their distance. In the Einstein field equations, it quantifies the relation between the geometry of spacetime and the energy–momentum tensor (also referred to as the stress–energy tensor).

The measured value of the constant is known with some certainty to four significant digits. In SI units, its value is approximately 6.674×10−11 m3⋅kg−1⋅s−2.[1]

The modern notation of Newton's law involving G was introduced in the 1890s by C. V. Boys. The first implicit measurement with an accuracy within about 1% is attributed to Henry Cavendish in a 1798 experiment.[lower-alpha 2]

The gravitational constant is a defining constant in some systems of natural units, particularly geometrized unit systems, such as Planck units and Stoney units. When expressed in terms of such units, the value of the gravitational constant will generally have a numeric value of 1 or a value close to it. Due to the significant uncertainty in the measured value of G in terms of other known fundamental constants, a similar level of uncertainty will show up in the value of many quantities when expressed in such a unit system.

This way of expressing G shows the relationship between the average density of a planet and the period of a satellite orbiting just above its surface.

where distance is measured in terms of the semi-major axis of Earth's orbit (the astronomical unit, AU), time in years, and mass in the total mass of the orbiting system (M = M☉ + M⊕ + Template:Lunar mass[lower-alpha 5]).

The above equation is exact only within the approximation of the Earth's orbit around the Sun as a two-body problem in Newtonian mechanics, the measured quantities contain corrections from the perturbations from other bodies in the solar system and from general relativity.

This quantity gives a convenient simplification of various gravity-related formulas. The product GM is known much more accurately than either factor is.

Calculations in celestial mechanics can also be carried out using the units of solar masses, mean solar days and astronomical units rather than standard SI units. For this purpose, the Gaussian gravitational constant was historically in widespread use, k = 0.01720209895, expressing the mean angular velocity of the Sun–Earth system measured in radians per day. The use of this constant, and the implied definition of the astronomical unit discussed above, has been deprecated by the IAU since 2012.

The existence of the constant is implied in Newton's law of universal gravitation as published in the 1680s (although its notation as G dates to the 1890s),[11] but is not calculated in his Philosophiæ Naturalis Principia Mathematica where it postulates the inverse-square law of gravitation. In the Principia, Newton considered the possibility of measuring gravity's strength by measuring the deflection of a pendulum in the vicinity of a large hill, but thought that the effect would be too small to be measurable.[12] Nevertheless, he had the opportunity to estimate the order of magnitude of the constant when he surmised that "the mean density of the earth might be five or six times as great as the density of water", which is equivalent to a gravitational constant of the order:[13]

A measurement was attempted in 1738 by Pierre Bouguer and Charles Marie de La Condamine in their "Peruvian expedition". Bouguer downplayed the significance of their results in 1740, suggesting that the experiment had at least proved that the Earth could not be a hollow shell, as some thinkers of the day, including Edmond Halley, had suggested.[14]

The Schiehallion experiment, proposed in 1772 and completed in 1776, was the first successful measurement of the mean density of the Earth, and thus indirectly of the gravitational constant. The result reported by Charles Hutton (1778) suggested a density of 4.5 g/cm3 (4+1/2 times the density of water), about 20% below the modern value.[15] This immediately led to estimates on the densities and masses of the Sun, Moon and planets, sent by Hutton to Jérôme Lalande for inclusion in his planetary tables. As discussed above, establishing the average density of Earth is equivalent to measuring the gravitational constant, given Earth's mean radius and the mean gravitational acceleration at Earth's surface, by setting[11] [math]\displaystyle{ G = g\frac{R_\oplus^2}{M_\oplus} = \frac{3g}{4\pi R_\oplus\rho_\oplus}. }[/math] Based on this, Hutton's 1778 result is equivalent to G ≈ 8×10−11 m3⋅kg–1⋅s−2.

Diagram of torsion balance used in the Cavendish experiment performed by Henry Cavendish in 1798, to measure G, with the help of a pulley, large balls hung from a frame were rotated into position next to the small balls.

The first direct measurement of gravitational attraction between two bodies in the laboratory was performed in 1798, seventy-one years after Newton's death, by Henry Cavendish.[16] He determined a value for G implicitly, using a torsion balance invented by the geologist Rev. John Michell (1753). He used a horizontal torsion beam with lead balls whose inertia (in relation to the torsion constant) he could tell by timing the beam's oscillation. Their faint attraction to other balls placed alongside the beam was detectable by the deflection it caused. In spite of the experimental design being due to Michell, the experiment is now known as the Cavendish experiment for its first successful execution by Cavendish.

The accuracy of the measured value of G has increased only modestly since the original Cavendish experiment.[18] G is quite difficult to measure because gravity is much weaker than other fundamental forces, and an experimental apparatus cannot be separated from the gravitational influence of other bodies.

Cavendish's experiment proved to result in more reliable measurements than pendulum experiments of the "Schiehallion" (deflection) type or "Peruvian" (period as a function of altitude) type. Pendulum experiments still continued to be performed, by Robert von Sterneck (1883, results between 5.0 and 6.3 g/cm3) and Thomas Corwin Mendenhall (1880, 5.77 g/cm3).[22]

Published values of G derived from high-precision measurements since the 1950s have remained compatible with Heyl (1930), but within the relative uncertainty of about 0.1% (or 1,000 ppm) have varied rather broadly, and it is not entirely clear if the uncertainty has been reduced at all since the 1942 measurement. Some measurements published in the 1980s to 2000s were, in fact, mutually exclusive.[7][30] Establishing a standard value for G with a standard uncertainty better than 0.1% has therefore remained rather speculative.

The following table shows the NIST recommended values published since 1969: 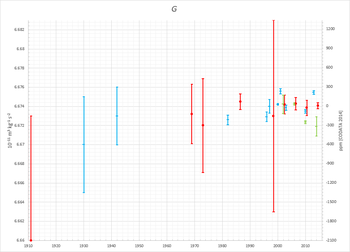 As of 2018, efforts to re-evaluate the conflicting results of measurements are underway, coordinated by NIST, notably a repetition of the experiments reported by Quinn et al. (2013).[44]

A controversial 2015 study of some previous measurements of G, by Anderson et al., suggested that most of the mutually exclusive values in high-precision measurements of G can be explained by a periodic variation.[46] The variation was measured as having a period of 5.9 years, similar to that observed in length-of-day (LOD) measurements, hinting at a common physical cause that is not necessarily a variation in G. A response was produced by some of the original authors of the G measurements used in Anderson et al.[47] This response notes that Anderson et al. not only omitted measurements, but that they also used the time of publication rather than the time the experiments were performed. A plot with estimated time of measurement from contacting original authors seriously degrades the length of day correlation. Also, consideration of the data collected over a decade by Karagioz and Izmailov shows no correlation with length of day measurements.[47][48] As such, the variations in G most likely arise from systematic measurement errors which have not properly been accounted for. Under the assumption that the physics of type Ia supernovae are universal, analysis of observations of 580 of them has shown that the gravitational constant has varied by less than one part in ten billion per year over the last nine billion years according to Mould et al. (2014).[49]