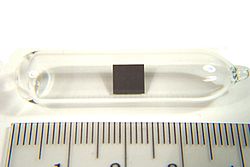 A sample of thorium

The thorium fuel cycle is a nuclear fuel cycle that uses an isotope of thorium, 232Th, as the fertile material. In the reactor, 232Th is transmuted into the fissile artificial uranium isotope 233U which is the nuclear fuel. Unlike natural uranium, natural thorium contains only trace amounts of fissile material (such as 231Th), which are insufficient to initiate a nuclear chain reaction. Additional fissile material or another neutron source is necessary to initiate the fuel cycle. In a thorium-fuelled reactor, 232Th absorbs neutrons to produce 233U. This parallels the process in uranium breeder reactors whereby fertile 238U absorbs neutrons to form fissile 239Pu. Depending on the design of the reactor and fuel cycle, the generated 233U either fissions in situ or is chemically separated from the used nuclear fuel and formed into new nuclear fuel.

The thorium fuel cycle has several potential advantages over a uranium fuel cycle, including thorium's greater abundance, superior physical and nuclear properties, reduced plutonium and actinide production,[1] and better resistance to nuclear weapons proliferation when used in a traditional light water reactor[1][2] though not in a molten salt reactor.[3][4][5]

Concerns about the limits of worldwide uranium resources motivated initial interest in the thorium fuel cycle.[6] It was envisioned that as uranium reserves were depleted, thorium would supplement uranium as a fertile material. However, for most countries uranium was relatively abundant and research in thorium fuel cycles waned. A notable exception was India's three-stage nuclear power programme.[7] In the twenty-first century thorium's claimed potential for improving proliferation resistance and waste characteristics led to renewed interest in the thorium fuel cycle.[8][9][10] While thorium is more abundant in the continental crust than uranium and easily extracted from monazite as a side product of rare earth element mining, it is much less abundant in seawater than uranium.

At Oak Ridge National Laboratory in the 1960s, the Molten-Salt Reactor Experiment used 233U as the fissile fuel in an experiment to demonstrate a part of the Molten Salt Breeder Reactor that was designed to operate on the thorium fuel cycle. Molten salt reactor (MSR) experiments assessed thorium's feasibility, using thorium(IV) fluoride dissolved in a molten salt fluid that eliminated the need to fabricate fuel elements. The MSR program was defunded in 1976 after its patron Alvin Weinberg was fired.[11]

In 1993, Carlo Rubbia proposed the concept of an energy amplifier or "accelerator driven system" (ADS), which he saw as a novel and safe way to produce nuclear energy that exploited existing accelerator technologies. Rubbia's proposal offered the potential to incinerate high-activity nuclear waste and produce energy from natural thorium and depleted uranium.[12][13]

A 2011 MIT study concluded that although there is little in the way of barriers to a thorium fuel cycle, with current or near term light-water reactor designs there is also little incentive for any significant market penetration to occur. As such they conclude there is little chance of thorium cycles replacing conventional uranium cycles in the current nuclear power market, despite the potential benefits.[15]

Nuclear fission produces radioactive fission products which can have half-lives from days to greater than 200,000 years. According to some toxicity studies,[16] the thorium cycle can fully recycle actinide wastes and only emit fission product wastes, and after a few hundred years, the waste from a thorium reactor can be less toxic than the uranium ore that would have been used to produce low enriched uranium fuel for a light water reactor of the same power. Other studies assume some actinide losses and find that actinide wastes dominate thorium cycle waste radioactivity at some future periods.[17] Some fission products have been proposed for nuclear transmutation, which would further reduce the amount of nuclear waste and the duration during which it would have to be stored (whether in a deep geological repository or elsewhere). However, while the principal feasibility of some of those reactions has been demonstrated at laboratory scale, there is as of 2022 no large scale deliberate transmutation of fission products anywhere in the world and the upcoming MYRRHA research project into transmutation is mostly focused on transuranic waste. Furthermore, the cross section of some fission products is relatively low and others - such as Caesium - are present as a mixture of stable, short lived and long lived isotopes in nuclear waste, making transmutation dependent on extremely expensive isotope separation.

In a reactor, when a neutron hits a fissile atom (such as certain isotopes of uranium), it either splits the nucleus or is captured and transmutes the atom. In the case of 233U, the transmutations tend to produce useful nuclear fuels rather than transuranic waste. When 233U absorbs a neutron, it either fissions or becomes 234U. The chance of fissioning on absorption of a thermal neutron is about 92%; the capture-to-fission ratio of 233U, therefore, is about 1:12 – which is better than the corresponding capture vs. fission ratios of 235U (about 1:6), or 239Pu or 241Pu (both about 1:3).[6][18] The result is less transuranic waste than in a reactor using the uranium-plutonium fuel cycle.

234U, like most actinides with an even number of neutrons, is not fissile, but neutron capture produces fissile 235U. If the fissile isotope fails to fission on neutron capture, it produces 236U, 237Np, 238Pu, and eventually fissile 239Pu and heavier isotopes of plutonium. The 237Np can be removed and stored as waste or retained and transmuted to plutonium, where more of it fissions, while the remainder becomes 242Pu, then americium and curium, which in turn can be removed as waste or returned to reactors for further transmutation and fission.

However, the 231Pa (with a half-life of 3.27×104 years) formed via (n,2n) reactions with 232Th (yielding 231Th that decays to 231Pa), while not a transuranic waste, is a major contributor to the long-term radiotoxicity of spent nuclear fuel. While 231Pa can in principle be converted back to 232Th by neutron absorption its neutron absorption cross section is relatively low, making this rather difficult and possibly uneconomic.

Unlike most even numbered heavy isotopes, 232U is also a fissile fuel fissioning just over half the time when it absorbs a thermal neutron.[19] 232U has a relatively short half-life (68.9 years), and some decay products emit high energy gamma radiation, such as 224Rn, 212Bi and particularly 208Tl. The full decay chain, along with half-lives and relevant gamma energies, is:

Thorium-cycle fuels produce hard gamma emissions, which damage electronics, limiting their use in bombs. 232U cannot be chemically separated from 233U from used nuclear fuel; however, chemical separation of thorium from uranium removes the decay product 228Th and the radiation from the rest of the decay chain, which gradually build up as 228Th reaccumulates. The contamination could also be avoided by using a molten-salt breeder reactor and separating the 233Pa before it decays into 233U.[3] The hard gamma emissions also create a radiological hazard which requires remote handling during reprocessing.

As a fertile material thorium is similar to 238U, the major part of natural and depleted uranium. The thermal neutron absorption cross section (σa) and resonance integral (average of neutron cross sections over intermediate neutron energies) for 232Th are about three and one third times those of the respective values for 238U.

The primary physical advantage of thorium fuel is that it uniquely makes possible a breeder reactor that runs with slow neutrons, otherwise known as a thermal breeder reactor.[6] These reactors are often considered simpler than the more traditional fast-neutron breeders. Although the thermal neutron fission cross section (σf) of the resulting 233U is comparable to 235U and 239Pu, it has a much lower capture cross section (σγ) than the latter two fissile isotopes, providing fewer non-fissile neutron absorptions and improved neutron economy. The ratio of neutrons released per neutron absorbed (η) in 233U is greater than two over a wide range of energies, including the thermal spectrum. A breeding reactor in the uranium - plutonium cycle needs to use fast neutrons, because in the thermal spectrum one neutron absorbed by 239Pu on average leads to less than two neutrons.

Thorium is estimated to be about three to four times more abundant than uranium in Earth's crust,[20] although present knowledge of reserves is limited. Current demand for thorium has been satisfied as a by-product of rare-earth extraction from monazite sands. Notably, there is very little thorium dissolved in seawater, so seawater extraction is not viable, as it is with uranium. Using breeder reactors, known thorium and uranium resources can both generate world-scale energy for thousands of years.

Because the 233U produced in thorium fuels is significantly contaminated with 232U in proposed power reactor designs, thorium-based used nuclear fuel possesses inherent proliferation resistance. 232U cannot be chemically separated from 233U and has several decay products that emit high-energy gamma radiation. These high-energy photons are a radiological hazard that necessitate the use of remote handling of separated uranium and aid in the passive detection of such materials.

The long-term (on the order of roughly 103 to 106 years) radiological hazard of conventional uranium-based used nuclear fuel is dominated by plutonium and other minor actinides, after which long-lived fission products become significant contributors again. A single neutron capture in 238U is sufficient to produce transuranic elements, whereas five captures are generally necessary to do so from 232Th. 98–99% of thorium-cycle fuel nuclei would fission at either 233U or 235U, so fewer long-lived transuranics are produced. Because of this, thorium is a potentially attractive alternative to uranium in mixed oxide (MOX) fuels to minimize the generation of transuranics and maximize the destruction of plutonium.[21]

There are several challenges to the application of thorium as a nuclear fuel, particularly for solid fuel reactors:

In contrast to uranium, naturally occurring thorium is effectively mononuclidic and contains no fissile isotopes; fissile material, generally 233U, 235U or plutonium, must be added to achieve criticality. This, along with the high sintering temperature necessary to make thorium-dioxide fuel, complicates fuel fabrication. Oak Ridge National Laboratory experimented with thorium tetrafluoride as fuel in a molten salt reactor from 1964 to 1969, which was expected to be easier to process and separate from contaminants that slow or stop the chain reaction.

In an open fuel cycle (i.e. utilizing 233U in situ), higher burnup is necessary to achieve a favorable neutron economy. Although thorium dioxide performed well at burnups of 170,000 MWd/t and 150,000 MWd/t at Fort St. Vrain Generating Station and AVR respectively,[6] challenges complicate achieving this in light water reactors (LWR), which compose the vast majority of existing power reactors.

Another challenge associated with the thorium fuel cycle is the comparatively long interval over which 232Th breeds to 233U. The half-life of 233Pa is about 27 days, which is an order of magnitude longer than the half-life of 239Np. As a result, substantial 233Pa develops in thorium-based fuels. 233Pa is a significant neutron absorber and, although it eventually breeds into fissile 235U, this requires two more neutron absorptions, which degrades neutron economy and increases the likelihood of transuranic production.

Alternatively, if solid thorium is used in a closed fuel cycle in which 233U is recycled, remote handling is necessary for fuel fabrication because of the high radiation levels resulting from the decay products of 232U. This is also true of recycled thorium because of the presence of 228Th, which is part of the 232U decay sequence. Further, unlike proven uranium fuel recycling technology (e.g. PUREX), recycling technology for thorium (e.g. THOREX) is only under development.

Although the presence of 232U complicates matters, there are public documents showing that 233U has been used once in a nuclear weapon test. The United States tested a composite 233U-plutonium bomb core in the MET (Military Effects Test) blast during Operation Teapot in 1955, though with much lower yield than expected.[23]

Advocates for liquid core and molten salt reactors such as LFTRs claim that these technologies negate thorium's disadvantages present in solid fuelled reactors. As only two liquid-core fluoride salt reactors have been built (the ORNL ARE and MSRE) and neither have used thorium, it is hard to validate the exact benefits.[6]