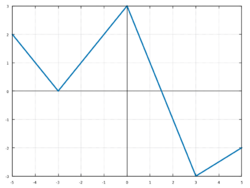 A distinct, but related notion is that of a property holding piecewise for a function, used when the domain can be divided into intervals on which the property holds. Unlike for the notion above, this is actually a property of the function itself. A piecewise linear function (which happens to be also continuous) is depicted as an example.

Here, notice that in order to evaluate a piecewise function at a given input value, the appropriate subdomain needs to be chosen in order to select the correct function—and produce the correct output value.

Continuity and differentiability of piecewise functions 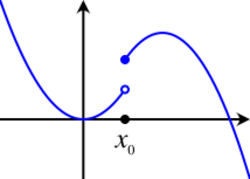 A piecewise function comprising different quadratic functions on either side of [math]\displaystyle{ x_0 }[/math].

A piecewise function is continuous on a given interval in its domain if the following conditions are met:

The pictured function, for example, is piecewise-continuous throughout its subdomains, but is not continuous on the entire domain, as it contains a jump discontinuity at [math]\displaystyle{ x_0 }[/math]. The filled circle indicates that the value of the right function piece is used in this position.

For a piecewise function to be differentiable on a given interval in its domain, the following conditions have to fulfilled in addition to those for continuity above:

In applied mathematical analysis, piecewise functions have been found to be consistent with many models of the human visual system, where images are perceived at a first stage as consisting of smooth regions separated by edges.[5] In particular, shearlets have been used as a representation system to provide sparse approximations of this model class in 2D and 3D.