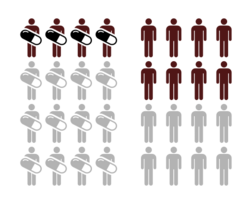 The group exposed to treatment (left) has half the risk (RR = 0.5) of an adverse outcome (black) compared to the unexposed group (right).

Statistical use and meaning

Risk ratio is used in the statistical analysis of the data of experimental, cohort and cross-sectional studies, to estimate the strength of the association between treatments or risk factors, and outcome.[2][3] For example, it is used to compare the risk of an adverse outcome when receiving a medical treatment versus no treatment (or placebo), or when exposed to an environmental risk factor versus not exposed.

Assuming the causal effect between the exposure and the outcome, values of RR can be interpreted as follows:

Risk ratio can be estimated from a 2x2 contingency table:

The point estimate of the risk ratio is

The sampling distribution of the [math]\displaystyle{ \log(RR) }[/math]is approximately normal,[7] with standard error

In regression models, the exposure is typically included as a indicator variable along with other factors that may affect risk. The risk ratio is usually reported as calculated for the mean of the sample values of the explanatory variables.

Comparison to the odds ratio

Risk ratio is different from the odds ratio, although it asymptotically approaches it for small probabilities of outcomes. If EE is substantially smaller than EN, then EE/(EE + EN) [math]\displaystyle{ \scriptstyle\approx }[/math] EE/EN. Similarly, if CE is much smaller than CN, then CE/(CN + CE) [math]\displaystyle{ \scriptstyle\approx }[/math] CE/CN. Thus, under the rare disease assumption

In epidemiological research, the odds ratio is commonly used for case-control studies, as the risk ratio cannot be estimated.[10]

Since risk ratio is a more intuitive measure of effectiveness, the distinction is important especially in cases of medium to high probabilities. If action A carries a risk of 99.9% and action B a risk of 99.0% then the risk ratio is just over 1, while the odds associated with action A are more than 10 times higher than the odds with B.