Note that the odds ratio is symmetric in the two events, and there is no causal direction implied (correlation does not imply causation): an OR greater than 1 does not establish that B causes A, or that A causes B.[1]

Two similar statistics that are often used to quantify associations are the relative risk (RR) and the absolute risk reduction (ARR). Often, the parameter of greatest interest is actually the RR, which is the ratio of the probabilities analogous to the odds used in the OR. However, available data frequently do not allow for the computation of the RR or the ARR but do allow for the computation of the OR, as in case-control studies, as explained below. On the other hand, if one of the properties (A or B) is sufficiently rare (in epidemiology this is called the rare disease assumption), then the OR is approximately equal to the corresponding RR.

The OR plays an important role in the logistic model.

A motivating example, in the context of the rare disease assumption

Relative risk is easier to understand than the odds ratio, but one reason to use odds ratio is that usually, data on the entire population is not available and random sampling must be used. In the example above, if it were very costly to interview villagers and find out if they were exposed to the radiation, then the prevalence of radiation exposure would not be known, and neither would the values of [math]\displaystyle{ V_E }[/math] or [math]\displaystyle{ V_N }[/math]. One could take a random sample of fifty villagers, but quite possibly such a random sample would not include anybody with the disease, since only 2.6% of the population are diseased. Instead, one might use a case-control study[2] in which all 26 diseased villagers are interviewed as well as a random sample of 26 who do not have the disease. The results might turn out as follows ("might", because this is a random sample):

It is standard in the medical literature to calculate the odds ratio and then use the rare-disease assumption (which is usually reasonable) to claim that the relative risk is approximately equal to it. This not only allows for the use of case-control studies, but makes controlling for confounding variables such as weight or age using regression analysis easier and has the desirable properties discussed in other sections of this article of invariance and insensitivity to the type of sampling.[3]

The odds ratio is the ratio of the odds of an event occurring in one group to the odds of it occurring in another group. The term is also used to refer to sample-based estimates of this ratio. These groups might be men and women, an experimental group and a control group, or any other dichotomous classification. If the probabilities of the event in each of the groups are p1 (first group) and p2 (second group), then the odds ratio is:

where p11, p10, p01 and p00 are non-negative "cell probabilities" that sum to one. The odds for Y within the two subpopulations defined by X = 1 and X = 0 are defined in terms of the conditional probabilities given X, i.e., P(Y|X):

Thus the odds ratio is

The simple expression on the right, above, is easy to remember as the product of the probabilities of the "concordant cells" (X = Y) divided by the product of the probabilities of the "discordant cells" (X ≠ Y). However note that in some applications the labeling of categories as zero and one is arbitrary, so there is nothing special about concordant versus discordant values in these applications.

If we had calculated the odds ratio based on the conditional probabilities given Y,

we would have obtained the same result

Other measures of effect size for binary data such as the relative risk do not have this symmetry property.

If X and Y are independent, their joint probabilities can be expressed in terms of their marginal probabilities px =  P(X = 1) and py =  P(Y = 1), as follows 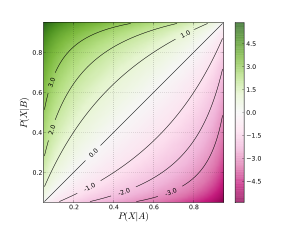 The odds ratio (OR) can be directly calculated from this table as:

This example also shows how odds ratios are sometimes sensitive in stating relative positions: in this sample men are (90/100)/(20/80) = 3.6 times as likely to have drunk wine than women, but have 27 times the odds. The logarithm of the odds ratio, the difference of the logits of the probabilities, tempers this effect, and also makes the measure symmetric with respect to the ordering of groups. For example, using natural logarithms, an odds ratio of 27/1 maps to 3.296, and an odds ratio of 1/27 maps to −3.296. 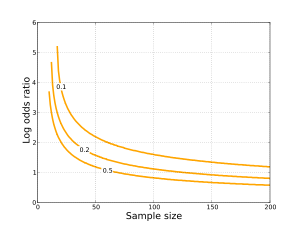 A graph showing the minimum value of the sample log odds ratio statistic that must be observed to be deemed significant at the 0.05 level, for a given sample size. The three lines correspond to different settings of the marginal probabilities in the 2×2 contingency table (the row and column marginal probabilities are equal in this graph).

Several approaches to statistical inference for odds ratios have been developed.

One approach to inference uses large sample approximations to the sampling distribution of the log odds ratio (the natural logarithm of the odds ratio). If we use the joint probability notation defined above, the population log odds ratio is

If we observe data in the form of a contingency table

then the probabilities in the joint distribution can be estimated as

The distribution of the log odds ratio is approximately normal with:

The standard error for the log odds ratio is approximately

This is an asymptotic approximation, and will not give a meaningful result if any of the cell counts are very small. If L is the sample log odds ratio, an approximate 95% confidence interval for the population log odds ratio is L ± 1.96SE.[4] This can be mapped to exp(L − 1.96SE), exp(L + 1.96SE) to obtain a 95% confidence interval for the odds ratio. If we wish to test the hypothesis that the population odds ratio equals one, the two-sided p-value is 2P(Z < −|L|/SE), where P denotes a probability, and Z denotes a standard normal random variable.

Logistic regression is one way to generalize the odds ratio beyond two binary variables. Suppose we have a binary response variable Y and a binary predictor variable X, and in addition we have other predictor variables Z1, ..., Zp that may or may not be binary. If we use multiple logistic regression to regress Y on X, Z1, ..., Zp, then the estimated coefficient [math]\displaystyle{ \hat{\beta}_x }[/math] for X is related to a conditional odds ratio. Specifically, at the population level

Insensitivity to the type of sampling

If the data form a "population sample", then the cell probabilities ∧pij are interpreted as the frequencies of each of the four groups in the population as defined by their X and Y values. In many settings it is impractical to obtain a population sample, so a selected sample is used. For example, we may choose to sample units with X = 1 with a given probability f, regardless of their frequency in the population (which would necessitate sampling units with X = 0 with probability 1 − f). In this situation, our data would follow the following joint probabilities:

This fact is exploited in two important situations:

In both these settings, the odds ratio can be calculated from the selected sample, without biasing the results relative to what would have been obtained for a population sample.

Use in quantitative research

Due to the widespread use of logistic regression, the odds ratio is widely used in many fields of medical and social science research. The odds ratio is commonly used in survey research, in epidemiology, and to express the results of some clinical trials, such as in case-control studies. It is often abbreviated "OR" in reports. When data from multiple surveys is combined, it will often be expressed as "pooled OR". 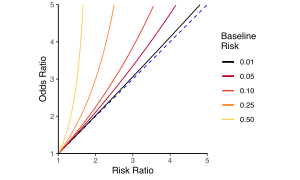 If the absolute risk in the unexposed group is available, conversion between the two is calculated by:[6]

where RC is the absolute risk of the unexposed group.

If the rare disease assumption does not apply, the odds ratio may be very different from the relative risk and can be misleading.

Consider the death rate of men and women passengers when the Titanic sank.[3] Of 462 women, 154 died and 308 survived. Of 851 men, 709 died and 142 survived. Clearly a man on the Titanic was more likely to die than a woman, but how much more likely? Since over half the passengers died, the rare disease assumption is strongly violated.

Which number correctly represents how much more dangerous it was to be a man on the Titanic? Relative risk has the advantage of being easier to understand and of better representing how people think.

Odds ratios have often been confused with relative risk in medical literature. For non-statisticians, the odds ratio is a difficult concept to comprehend, and it gives a more impressive figure for the effect.[9] However, most authors consider that the relative risk is readily understood.[10] In one study, members of a national disease foundation were actually 3.5 times more likely than nonmembers to have heard of a common treatment for that disease – but the odds ratio was 24 and the paper stated that members were ‘more than 20-fold more likely to have heard of’ the treatment.[11] A study of papers published in two journals reported that 26% of the articles that used an odds ratio interpreted it as a risk ratio.[12]

This may reflect the simple process of uncomprehending authors choosing the most impressive-looking and publishable figure.[10] But its use may in some cases be deliberately deceptive.[13] It has been suggested that the odds ratio should only be presented as a measure of effect size when the risk ratio cannot be estimated directly.[9]

The odds ratio has another unique property of being directly mathematically invertible whether analyzing the OR as either disease survival or disease onset incidence – where the OR for survival is direct reciprocal of 1/OR for risk. This is known as the 'invariance of the odds ratio'. In contrast, the relative risk does not possess this mathematical invertible property when studying disease survival vs. onset incidence. This phenomenon of OR invertibility vs. RR non-invertibility is best illustrated with an example:

This is again what is called the 'invariance of the odds ratio', and why a RR for survival is not the same as a RR for risk, while the OR has this symmetrical property when analyzing either survival or adverse risk. The danger to clinical interpretation for the OR comes when the adverse event rate is not rare, thereby exaggerating differences when the OR rare-disease assumption is not met. On the other hand, when the disease is rare, using a RR for survival (e.g. the RR=0.9796 from above example) can clinically hide and conceal an important doubling of adverse risk associated with a drug or exposure.

Estimators of the odds ratio

The sample odds ratio n11n00 / n10n01 is easy to calculate, and for moderate and large samples performs well as an estimator of the population odds ratio. When one or more of the cells in the contingency table can have a small value, the sample odds ratio can be biased and exhibit high variance.