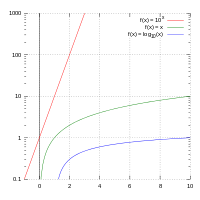 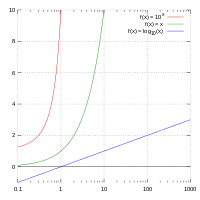 In science and engineering, a semi-log plot/graph or semi-logarithmic plot/graph has one axis on a logarithmic scale, the other on a linear scale. It is useful for data with exponential relationships, where one variable covers a large range of values, or to zoom in and visualize that - what seems to be a straight line in the beginning - is in fact the slow start of a logarithmic curve that is about to spike and changes are much bigger than thought initially.[1]

All equations of the form [math]\displaystyle{ y=\lambda a^{\gamma x} }[/math] form straight lines when plotted semi-logarithmically, since taking logs of both sides gives

On a semi-log plot the spacing of the scale on the y-axis (or x-axis) is proportional to the logarithm of the number, not the number itself. It is equivalent to converting the y values (or x values) to their log, and plotting the data on linear scales. A log–log plot uses the logarithmic scale for both axes, and hence is not a semi-log plot.

The equation of a line on a log–linear plot, where the abscissa axis is scaled logarithmically (with a logarithmic base of n), would be

The equation for a line on a linear–log plot, with an ordinate axis logarithmically scaled (with a logarithmic base of n), would be:

Finding the function from the semi–log plot

On a linear-log plot, pick some fixed point (x0, F0), where F0 is shorthand for F(x0), somewhere on the straight line in the above graph, and further some other arbitrary point (x1, F1) on the same graph. The slope formula of the plot is:

In other words, F is proportional to the logarithm of x times the slope of the straight line of its lin–log graph, plus a constant. Specifically, a straight line on a lin–log plot containing points (F0, x0) and (F1, x1) will have the function:

On a log–linear plot (logarithmic scale on the y-axis), pick some fixed point (x0, F0), where F0 is shorthand for F(x0), somewhere on the straight line in the above graph, and further some other arbitrary point (x1, F1) on the same graph. The slope formula of the plot is:

Notice that nlogn(F1) = F1. Therefore, the logs can be inverted to find:

This can be generalized for any point, instead of just F1:

In physics and chemistry, a plot of logarithm of pressure against temperature can be used to illustrate the various phases of a substance, as in the following for water: 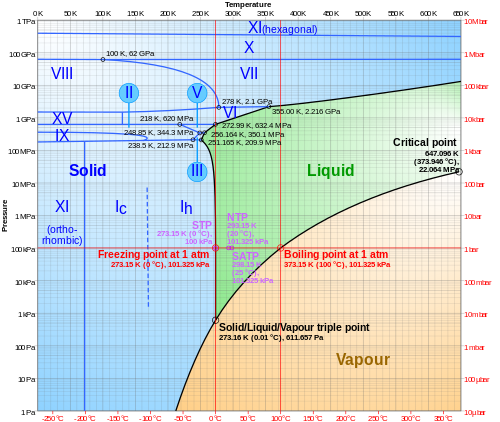 While ten is the most common base, there are times when other bases are more appropriate, as in this example: 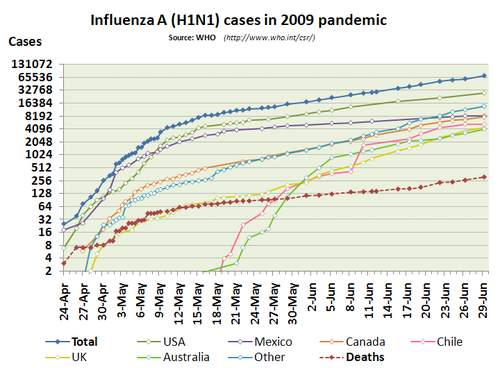 A semi-logarithmic plot of cases and deaths in the 2009 outbreak of influenza A (H1N1). Notice that while the horizontal (time) axis is linear, with the dates evenly spaced, the vertical (cases) axis is logarithmic, with the evenly spaced divisions being labelled with successive powers of two. The semi-log plot makes it easier to see when the infection has stopped spreading at its maximum rate ie. the straight line on this exponential plot, and starts to curve to indicate a slower rate. This might indicate that some form of mitigation action is working eg. social distancing.

In biology and biological engineering, the change in numbers of microbes due to asexual reproduction and nutrient exhaustion is commonly illustrated by a semi-log plot. Time is usually the independent axis, with the logarithm of the number or mass of bacteria or other microbe as the dependent variable. This forms a plot with four distinct phases, as shown below.