Piłsudski's post-World War I Intermarium concept ranging from Finland in the north to the Balkans in the south. (In light-green: eastern parts of Ukrainian and Belarusian lands in 1922 incorporated into Soviet Union.)

Intermarium (Polish: Międzymorze, Polish pronunciation: [mʲɛnd͡zɨˈmɔʐɛ]) was a geopolitical project conceived by politicians in successor states of the former Polish–Lithuanian Commonwealth in several iterations, some of which anticipated the inclusion as well of other, neighboring states. The proposed multinational polity would have extended across territories lying between the Baltic, Black and Adriatic Seas, hence the name meaning "Between-Seas".

Prospectively a federation[1][2][3][4][5] of Central and Eastern European countries, the post-World War I Intermarium plan pursued by Polish leader and former political prisoner of the Russian Empire, Józef Piłsudski (1867–1935), sought to recruit to the proposed federation the Baltic states (Lithuania, Latvia, Estonia), Finland ,[6] Belarus, Ukraine, Hungary, Romania, Yugoslavia and Czechoslovakia.[7][8] The Polish name Międzymorze (from między, "between"; and morze, "sea"), meaning "Between-Seas", was rendered into Latin as "Intermarium."[9]

The proposed federation was meant to emulate the Polish–Lithuanian Commonwealth, stretching from the Baltic Sea to the Black Sea, that, from the end of the 16th century to the end of the 18th, had united the Kingdom of Poland and the Grand Duchy of Lithuania. Intermarium complemented Piłsudski's other geopolitical vision, Prometheism, whose goal was the dismemberment of the Russian Empire and that Empire's divestment of its territorial acquisitions.[10][11][12][13]

Intermarium was, however, perceived by some Lithuanians as a threat to their newly established independence, and by some Ukrainians as a threat to their aspirations for independence,[14][15][16] and while France backed the proposal, it was opposed by Russia and by most other Western powers.[17][18][19] Within two decades of the failure of Piłsudski's grand scheme, all the countries that he had viewed as candidates for membership in the Intermarium federation had fallen to the Soviet Union or Nazi Germany, except for Finland (which suffered some territorial losses in the 1939–40 Winter War with the Soviet Union). 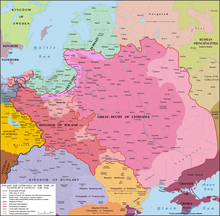 Polish-Lithuanian union at its greatest extent 1386-1434

The Polish–Lithuanian Commonwealth at its greatest extent, 1635

A Polish–Lithuanian union and military alliance had come about as a mutual response to a common threat posed by the Teutonic Order and the Golden Horde and its successor states, including Muscovy. The alliance was first established in 1385 by the Union of Krewa,[20] solemnized by the marriage of Poland's Queen Jadwiga and Lithuania's Grand Duke Jogaila, of the Gediminid dynasty, who became King Władysław II Jagiełło of Poland.

The Polish-Lithuanian union lasted for a total of 410 years.

Between the November and January Uprisings, in 1832–61, the idea of resurrecting an updated Polish–Lithuanian Commonwealth was advocated by Prince Adam Jerzy Czartoryski, residing in exile at the Hôtel Lambert in Paris .[21]

In his youth Czartoryski had fought against Russia in the Polish-Russian War of 1792 and would have done so again in the Kościuszko Uprising of 1794, had he not been arrested at Brussels on his way back to Poland. Subsequently, in 1795 he and his younger brother had been commanded to enter the Russian army, and Catherine the Great had been so favorably impressed with them that she had restored to them part of their confiscated estates. Adam Czartoryski had subsequently served Emperors Paul and Alexander I as a diplomat and foreign minister, during the Napoleonic Wars establishing an anti-French coalition. Czartoryski had been one of the leaders of the Polish November 1830 Uprising and, after its suppression by Russia, had been sentenced to death but eventually allowed to go into exile in France. 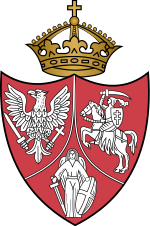 In Paris the "visionary"[22] statesman and former friend, confidant and de facto foreign minister of Russia's Emperor Alexander I acted as the "uncrowned king and unacknowledged foreign minister" of a nonexistent Poland.[23]

In his book, Essai sur la diplomatie (Essay on Diplomacy), completed in 1827 but published only in 1830, Czartoryski observed that, "Having extended her sway south and west, and being by the nature of things unreachable from the east and north, Russia becomes a source of constant threat to Europe." He argued that she would have done better, cultivating "friends rather than slaves." He also identified a future threat from Prussia and urged the incorporation of East Prussia into a resurrected Poland.[24]

His diplomatic efforts anticipated Piłsudski's Prometheist project in linking efforts for Polish independence with similar movements of other subjugated nations in Europe, as far east as the Caucasus Mountains, most notably in Georgia.[25]

Czartoryski aspired above all to reconstitute—with French, British and Turkish support—a Polish–Lithuanian Commonwealth federated with the Czechs, Slovaks, Hungarians, Romanians and all the South Slavs of the future Yugoslavia. Poland, in his concept, could have mediated the conflicts between Hungary and the Slavs, and between Hungary and Romania.[26] The plan seemed achievable[27] during the period of national revolutions in 1848–49 but foundered on lack of western support, on Hungarian intransigence toward the Czechs, Slovaks and Romanians, and on the rise of German nationalism.[28]

"Nevertheless," concludes Dziewanowski, "the Prince's endeavor constitutes a [vital] link [between] the 16th-century Jagiellon [federative prototype] and Józef Piłsudski's federative-Prometheist program [that was to follow after World War I]."[26] 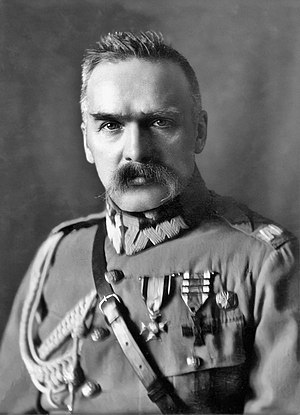 Józef Piłsudski's strategic goal was to resurrect an updated, democratic form of the Polish–Lithuanian Commonwealth, while working for the disintegration of the Russian Empire, and later the Soviet Union, into its ethnic constituents.[29] (The latter was his Prometheist project.)[29] Piłsudski saw an Intermarium federation as a counterweight to Russian and German imperialism.[30][31]

According to Dziewanowski, the plan was never expressed in systematic fashion but instead relied on Piłsudski's pragmatic instincts.[32] According to British scholar George Sanford, about the time of the Polish-Soviet War of 1920 Piłsudski recognized that the plan was not feasible.[33]

Piłsudski's plan faced opposition from virtually all quarters. The Soviets, whose sphere of influence was directly threatened, worked to thwart the Intermarium agenda.[18] The Allied Powers assumed that Bolshevism was only a temporary threat and did not want to see their important (from the balance-of-power viewpoint) traditional ally, Russia, weakened. They resented Piłsudski's refusal to aid their White allies, viewed Piłsudski with suspicion, saw his plans as unrealistic, and urged Poland to confine itself to areas of clear-cut Polish ethnicity.[34][35][36] The Lithuanians,[35][37] who had re-established their independence in 1918, were unwilling to join; the Ukrainians, similarly seeking independence,[19] likewise feared that Poland might again subjugate them;[35] and the Belarusians, who had little national consciousness, were not interested either in independence or in Piłsudski's proposals of union.[35] The chances for Piłsudski's scheme were not enhanced by a series of post-World War I wars and border conflicts between Poland and its neighbors in disputed territories—the Polish-Soviet War, the Polish–Lithuanian War, the Polish–Ukrainian War, and border conflicts between Poland and Czechoslovakia.

Piłsudski's concept was opposed within Poland itself, where National Democracy leader Roman Dmowski[38][39] argued for an ethnically homogeneous Poland in which minorities would be Polonized.[40][41] Many Polish politicians, including Dmowski, opposed the idea of a multiethnic federation, preferring instead to work for a unitary Polish nation-state.[39] Sanford has described Piłsudski's policies after his resumption of power in 1926 as similarly focusing on the Polonization of the country's Eastern Slavic minorities and on the centralization of power.[33]

While some scholars accept at face value the democratic principles claimed by Piłsudski for his federative plan,[42] others view such claims with skepticism, pointing out a coup d'état in 1926 when Piłsudski assumed nearly dictatorial powers.[13][43] In particular, his project is viewed unfavorably by most Ukrainian historians, with Oleksandr Derhachov arguing that the federation would have created a greater Poland in which the interests of non-Poles, especially Ukrainians, would have received short shrift.[15]

Some historians hold that Piłsudski, who argued that "There can be no independent Poland without an independent Ukraine," may have been more interested in splitting Ukraine from Russia than in assuring Ukrainians' welfare.[44][45] He did not hesitate to use military force to expand Poland's borders to Galicia and Volhynia, crushing a Ukrainian attempt at self-determination in disputed territories east of the Bug River which contained a substantial Polish presence[46] (a Polish majority mainly in cities such as Lwów, surrounded by a rural Ukrainian majority).

Speaking of Poland's future frontiers, Piłsudski said: "All that we can gain in the west depends on the Entente—on the extent to which it may wish to squeeze Germany," while in the east "there are doors that open and close, and it depends on who forces them open and how far."[47] In the eastern chaos, the Polish forces set out to expand as far as feasible. On the other hand, Poland had no interest in joining the western intervention in the Russian Civil War[46] or in conquering Russia itself.[48]

In the aftermath of the Polish-Soviet War (1919–21), Piłsudski's concept of a federation of Central and Eastern European countries, based on a Polish-Ukrainian axis, lost any chance of realization.[49]

Piłsudski next contemplated a federation or alliance with the Baltic and Balkan states. This plan envisioned a Central European union including Poland, Czechoslovakia, Hungary, Scandinavia, the Baltic states, Italy, Romania, Bulgaria, Yugoslavia and Greece—thus stretching not only west-east from the Baltic to the Black Sea, but north-south from the Arctic Ocean to the Mediterranean Sea.[49] This project also failed: Poland was distrusted by Czechoslovakia and Lithuania; and while it had relatively good relations with the other countries, they had tensions with their neighbors, making it virtually impossible to create in Central Europe a large block of countries that all had good relations with each other. In the end, in place of a large federation, only a Polish-Romanian alliance was established, beginning in 1921.[50] In comparison, Czechoslovakia had more success with its Little Entente (1920–38) with Romania and Yugoslavia, supported by France.

Piłsudski died in 1935. A later, much reduced version of his concept was attempted by interwar Polish Foreign Minister Józef Beck, a Piłsudski protégé. His proposal, during the late 1930s, of a "Third Europe"—an alliance of Poland, Romania and Hungary—gained little ground before World War II supervened.[49]

Disregarding the 1932 Polish-Soviet Non-Aggression Pact, the Soviet Union allied itself with Nazi Germany to divide Central and Eastern Europe between them.[51] According to some historians, it was the failure to create a strong counterweight to Germany and the Soviet Union, as proposed by Piłsudski, that doomed Intermarium's prospective member countries to their fates in World War II.[30][31][52][53]

World War II and since 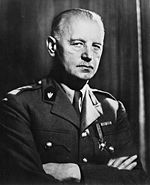 The concept of a "Central [and Eastern] European Union"— a triangular geopolitical entity anchored in the Baltic, Black, and Adriatic or Aegean Seas—was revived during World War II in Władysław Sikorski's Polish Government in Exile. A first step toward its implementation—1942 discussions between the Greek, Yugoslav, Polish and Czechoslovak governments in exile regarding prospective Greek-Yugoslav and Polish-Czechoslovak federations—ultimately foundered on Soviet opposition, which led to Czech hesitation and Allied indifference or hostility.[49] A declaration by the Polish Underground State in that period called for the creation of a Central and Eastern European federal union undominated by any one state.[54][55]

On 12 May 2011, the Visegrád Group countries (Poland , Czech Republic , Slovakia, and Hungary) announced the formation of a Visegrád Battlegroup under Poland's command. The battlegroup was in place by 2016 as an independent force, not part of the NATO command. In addition, starting in 2013, the four countries were to begin joint military exercises under the auspices of the NATO Response Force. Some scholars saw this as a first step toward close Central European regional cooperation.[56]