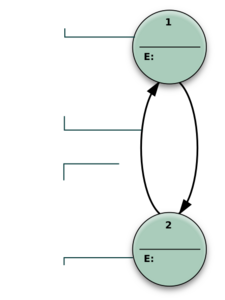 A state diagram is a type of diagram used in computer science and related fields to describe the behavior of systems. State diagrams require that the system described is composed of a finite number of states; sometimes, this is indeed the case, while at other times this is a reasonable abstraction. Many forms of state diagrams exist, which differ slightly and have different semantics.

State diagrams are used to give an abstract description of the behavior of a system. This behavior is analyzed and represented by a series of events that can occur in one or more possible states. Hereby "each diagram usually represents objects of a single class and track the different states of its objects through the system".[1]

State diagrams can be used to graphically represent finite-state machines (also called finite automata). This was introduced by Claude Shannon and Warren Weaver in their 1949 book The Mathematical Theory of Communication. Another source is Taylor Booth in his 1967 book Sequential Machines and Automata Theory. Another possible representation is the state-transition table.

For example, if a state has a number of outputs (e.g. "a= motor counter-clockwise=1, b= caution light inactive=0") the diagram should reflect this : e.g. "q5/1,0" designates state q5 with outputs a=1, b=0. This designator will be written inside the state's circle.

S1 and S2 are states and S1 is an accepting state or a final state. Each edge is labeled with the input. This example shows an acceptor for binary numbers that contain an even number of zeros. 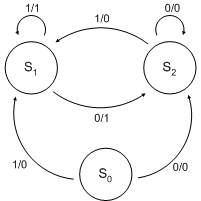 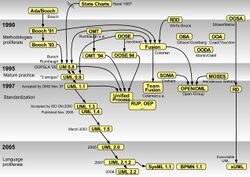 Harel statecharts,[5] invented by computer scientist David Harel, are gaining widespread usage since a variant has become part of the Unified Modeling Language (UML). The diagram type allows the modeling of superstates, orthogonal regions, and activities as part of a state.

There are other sets of semantics available to represent state diagrams. For example, there are tools for modeling and designing logic for embedded controllers.[6] These diagrams, like Harel's original state machines,[7] support hierarchically nested states, orthogonal regions, state actions, and transition actions.[8]

Newcomers to the state machine formalism often confuse state diagrams with flowcharts. The figure below shows a comparison of a state diagram with a flowchart. A state machine (panel (a)) performs actions in response to explicit events. In contrast, the flowchart (panel (b)) does not need explicit events but rather transitions from node to node in its graph automatically upon completion of activities.[9]

Nodes of flowcharts are edges in the induced graph of states. The reason is that each node in a flowchart represents a program command. A program command is an action to be executed. So it is not a state, but when applied to the program's state, it results in a transition to another state.

The program graph is a sequence of commands. If no variables exist, then the state consists only of the program counter, which keeps track of where in the program we are during execution (what is the next command to be applied).

A self transition is a transition where the initial and the final state are the same.

A representative example is a do loop incrementing some counter until it overflows and becomes 0 again. Although the do loop executes the same increment command iteratively, so the program graph executes a cycle, in its state space is not a cycle, but a line. This results from the state being the program location (here cycling) combined with the counter value, which is strictly increasing (until the overflow), so different states are visited in sequence, until the overflow. After the overflow the counter becomes 0 again, so the initial state is revisited in the state space, closing a cycle in the state space (assuming the counter was initialized to 0).

The figure above attempts to show that reversal of roles by aligning the arcs of the state diagrams with the processing stages of the flowchart.

You can compare a flowchart to an assembly line in manufacturing because the flowchart describes the progression of some task from beginning to end (e.g., transforming source code input into object code output by a compiler). A state machine generally has no notion of such a progression. The door state machine shown at the top of this article, for example, is not in a more advanced stage when it is in the "closed" state, compared to being in the "opened" state; it simply reacts differently to the open/close events. A state in a state machine is an efficient way of specifying a particular behavior, rather than a stage of processing.

An interesting extension is to allow arcs to flow from any number of states to any number of states. This only makes sense if the system is allowed to be in multiple states at once, which implies that an individual state only describes a condition or other partial aspect of the overall, global state. The resulting formalism is known as a Petri net.

Another extension allows the integration of flowcharts within Harel statecharts. This extension supports the development of software that is both event driven and workflow driven.