Short description: Ancient supercontinent of approximately 2,500 to 1,500 million years ago 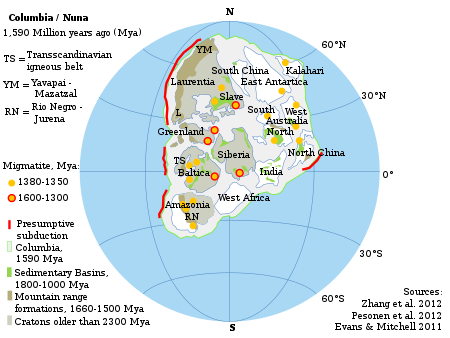 The supercontinent Columbia about 1.6 billion years ago

Columbia, also known as Nuna or Hudsonland, was one of Earth's ancient supercontinents. It was first proposed by John J.W. Rogers and M. Santosh in 2002[1] and is thought to have existed approximately 2,500 to 1,500 million years ago, in the Paleoproterozoic Era. The assembly of the supercontinent was likely completed during global-scale collisional events from 2100 to 1800 million years ago.[2]

Columbia consisted of proto-cratons that made up the cores of the continents of Laurentia, Baltica, Ukrainian Shield, Amazonian Shield, Australia, and possibly Siberia, North China, and Kalaharia as well.

The evidence of Columbia's existence is provided by geological[2][3] and paleomagnetic data.[4]

Columbia is estimated to have been approximately 12,900 km (8,000 mi) from north to south at its broadest part. The eastern coast of India was attached to western North America, with southern Australia against western Canada . In this era most of South America was rotated such that the western edge of modern-day Brazil lined up with eastern North America, forming a continental margin that extended into the southern edge of Scandinavia.[5]

Columbia was assembled along global-scale 2.1–1.8 Ga collisional orogens and contained almost all of Earth's continental blocks.[2]

Some of the events associated with the assembly of Columbia are:[2]

The fragmentation corresponded with widespread anorogenic magmatic activity, forming anorthosite-mangerite-charnockite-granite (AMCG) suites in North America, Baltica, Amazonia, and North China, and continued until the final breakup of the supercontinent at about 1.3–1.2 Ga, marked by the emplacement of the 1.27 Ga Mackenzie and 1.24 Ga Sudbury mafic dyke swarms in North America.[3] Other dyke swarms associated with extensional tectonics and the break-up of Columbia include the Satakunta-Ulvö dyke swarm in Fennoscandia and the Galiwinku dyke swarm in Australia.[11]

An area around Georgetown in northern Queensland, Australia, has been suggested to consist of rocks that originally formed part of Nuna 1.7 billion years ago in what is now Northern Canada.[12]

In the initial configuration of Rogers and Santosh (2002), South Africa , Madagascar , India , Australia , and attached parts of Antarctica are placed adjacent to the western margin of North America, whereas Greenland, Baltica (Northern Europe), and Siberia are positioned adjacent to the northern margin of North America, and South America is placed against West Africa. In the same year (2002), Zhao et al. (2002) proposed an alternative configuration of Columbia,[13] in which the fits of Baltica and Siberia with Laurentia and the fit of South America with West Africa are similar to those of the Rogers and Santosh (2002) configuration, whereas the fits of India, East Antarctica, South Africa, and Australia with Laurentia are similar to their corresponding fits in the configuration of Rodinia.

This continental configuration is based on the available geological reconstructions of 2.1–1.8 Ga orogens and related Archean cratonic blocks, especially on those reconstructions between South America vs West Africa, Western Australia vs South Africa, Laurentia vs Baltica, Siberia vs Laurentia, Laurentia vs Central Australia, East Antarctica vs Laurentia, and North China vs India.[13][14] Of these reconstructions, the fits of Baltica and Siberia with Laurentia, South America with West Africa, and Southern Africa with Western Australia are also consistent with paleomagnetic data.[4]

The new configuration of the Columbia supercontinent was reconstructed by Guiting Hou (2008) based on the reconstruction of giant radiating dike swarms.[15]

The newer configuration of the Columbia (Nuna) has been suggested by Chaves and Rezende (2019) supported on available paleomagnetic data and fragments of 1.79-1.75 Ga large igneous provinces.[16]

Rogers and Santosh proposed the name Columbia for a hypothetical supercontent preceding Rodinia. They chose the name because critical evidence for the supercontinent was provided by the relationship between the Columbia region of North America (centered on the state of Washington (state) ) and east India.[17]

The naming is not universally accepted. In 1997, P.F. Hoffman proposed the name Nuna (from Inuit "lands bordering the northern oceans") for the Proterozoic core of Laurentia plus Baltica.[18] Because Hoffman published his name earlier than Rogers and Santosh published theirs, there have been calls to use Nuna rather than Columbia, on the basis of scientific precedence. However, Hoffman's Nuna was essentially equivalent to an earlier Nena, and neither clearly referred to an early supercontinent, as Colombia did, rather than merely the core of this earlier supercontinent. Other earlier speculative continents included Hudsonland and Arctica, but Rogers and Santosh were the first to give a complete reconstruction of a Paleoproterozic supercontinent preceding Rodinia.[19]