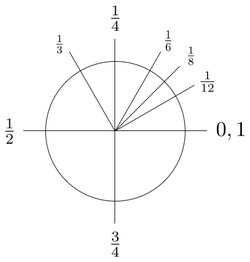 Subdivisions of a turn include half turns, quarter turns, centiturns, milliturns, points, etc.

A turn can be divided in 100 centiturns or 1000 milliturns, with each milliturn corresponding to an angle of 0.36°, which can also be written as 21′ 36″. A protractor divided in centiturns is normally called a percentage protractor.

Binary fractions of a turn are also used. Sailors have traditionally divided a turn into 32 compass points. The binary degree, also known as the binary radian (or brad), is ​1⁄256 turn.[1] The binary degree is used in computing so that an angle can be represented to the maximum possible precision in a single byte. Other measures of angle used in computing may be based on dividing one whole turn into 2n equal parts for other values of n.[2]

The notion of turn is commonly used for planar rotations.

The word turn originates via Latin and French from the Greek word τόρνος (Script error: No such module "Ancient Greek". – a lathe).

In 1697, David Gregory used π/ρ (pi over rho) to denote the perimeter of a circle (i.e., the circumference) divided by its radius.[3][4] However, earlier in 1647, William Oughtred had used δ/π (delta over pi) for the ratio of the diameter to perimeter. The first use of the symbol π on its own with its present meaning (of perimeter divided by diameter) was in 1706 by the Welsh mathematician William Jones.[5] Euler adopted the symbol with that meaning in 1737, leading to its widespread use.

Percentage protractors have existed since 1922,[6] but the terms centiturns and milliturns were introduced much later by Fred Hoyle.[7]

The circumference of the unit circle (whose radius is one) is 2π.

In 2010, Michael Hartl proposed to use tau to represent Palais' circle constant: Template:Tau = 2π. He offered two reasons. First, Template:Tau is the number of radians in one turn, which allows fractions of a turn to be expressed more directly: for instance, a 3/4 turn would be represented as 3/4Template:Tau rad instead of 3/2π rad. Second, Template:Tau visually resembles π, whose association with the circle constant is unavoidable.[14] Hartl's Tau Manifesto[15] gives many examples of formulas that are asserted to be clearer where tau is used instead of pi.[16][17][18]

The proposal is implemented in the Google calculator and in several computer programs like Python[19], Perl[20], Processing[21], and Nim[22]. It has also been used in at least one mathematical research article,[23] authored by the Template:Tau-promoter P. Harremoës.[24]

However, none of these proposals have received widespread acceptance by the mathematical and scientific communities.[25]

In kinematics, a turn is a rotation less than a full revolution. A turn may be represented in a mathematical model that uses expressions of complex numbers or quaternions. In the complex plane every non-zero number has a polar coordinate expression z = r cis(a) = r cos(a) + ri sin(a) where r > 0 and a is in [0, 2π). A turn of the complex plane arises from multiplying z = x + iy by an element u = ebi that lies on the unit circle:

Frank Morley consistently referred to elements of the unit circle as turns in the book Inversive Geometry, (1933) which he coauthored with his son Frank Vigor Morley.[26]

The Latin term for turn is versor, which is a quaternion that can be visualized as an arc of a great circle. The product of two versors can be compared to a spherical triangle where two sides add to the third. For the kinematics of rotation in three dimensions, see quaternions and spatial rotation.