Ufology (/juːˈfɒlədʒi/) is the investigation of unidentified flying objects (UFOs) by people who believe that they may be of extraordinary origins (most frequently of, extraterrestrial alien visitors).[1][2] While there are instances of government, private, and fringe science investigations of UFOs, ufology is regarded by skeptics and science educators as a canonical example of pseudoscience.

Ufology is a neologism derived from UFO (a term apparently coined by Edward J. Ruppelt),[3] and is derived from appending the acronym UFO with the suffix -logy (from the Ancient Greek λογία (logiā)). Early uses of ufology include an article in Fantastic Universe (1957)[4] and a 1958 presentation for the UFO "research organization" The Planetary Center.[5] 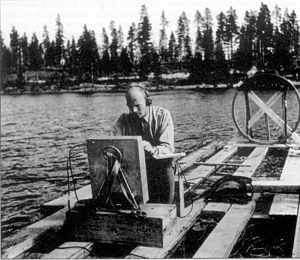 The roots of ufology include the "mystery airships" of the late 1890s, the "foo fighters" reported by Allied airmen during World War II , the "ghost fliers" of Europe and North America during the 1930s, the "ghost rockets" of Scandinavia (mostly Sweden) in 1946, and the Kenneth Arnold "flying saucer" sighting of 1947.[6][7] Media attention to the Arnold sighting helped publicize the concept of flying saucers.[8]

Publicity of UFOs increased after World War II, coinciding with the escalation of the Cold War and strategic concerns related to the development and detection (e.g., the Ground Observer Corps) of advanced Soviet aircraft.[6][9][10] Official, government-sponsored activities in the United States related to ufology ended in the late 1960s following the Condon Committee report and the termination of Project Blue Book.[11] Government-sponsored, UFO-related activities in other countries, including the United Kingdom ,[12][13] Canada,[14] Denmark,[15] Italy,[16] and Sweden[17] also ended. An exception to this trend is France, which maintains the GEIPAN[18] program, formerly known as GEPAN (1977–1988) and SEPRA (1988–2004), operated by the French Space Agency CNES.

Status as a field

Despite investigations sponsored by governments and private entities, ufology is not embraced by academia as a scientific field of study, and is instead considered a pseudoscience by skeptics and science educators,[19] being often included on lists of topics characterized as pseudoscience as either a partial[20] or total[21][22] pseudoscience.[23][24][25][26][27][28] Pseudoscience is a term that classifies arguments that are claimed to exemplify the methods and principles of science, but do not in fact adhere to an appropriate scientific method, lack supporting evidence, plausibility, falsifiability, or otherwise lack scientific status.[29] Some writers have identified social factors that contribute to the status of ufology as a pseudoscience.[30][31][32]

Although some ufologists (e.g., Peter A. Sturrock) have proposed explicit methodological activities for investigation of UFOs,[33] scientific UFO research is challenged by the facts that the phenomena are spatially and temporally unpredictable, are not reproducible, and lack tangible physicality.[34][35] That most UFO sightings have mundane explanations[36] limits interpretive power of "interesting," extra-ordinary UFO-related events, with the astronomer Carl Sagan writing: "The reliable cases are uninteresting and the interesting cases are unreliable. Unfortunately there are no cases that are both reliable and interesting."[37]

The ufologists J. Allen Hynek and Jacques Vallée have each developed descriptive systems for characterizing UFO sightings, and by extension for organizing ufology investigations.[38][39][40]

In addition to UFO sightings, certain supposedly related phenomena are of interest to some ufologists, including crop circles,[41] cattle mutilations,[42] and alien abductions and implants.[43] Some ufologists have also promoted UFO conspiracy theories, including the Roswell Incident of 1947,[44][45][46] the Majestic 12 documents,[47] and UFO disclosure advocates.[48][49]

Skeptic Robert Sheaffer has accused ufology of having a "credulity explosion,"[50] writing that, "the kind of stories generating excitement and attention in any given year would have been rejected by mainstream ufologists a few years earlier for being too outlandish."[50] The physicist James E. McDonald also identified "cultism" and "extreme...subgroups" as negatively impacting ufology.[51]

During the Cold War, ufology was synthesized with the ideas of a Trotskyist movement in South America known as Posadism. Posadism's main theorist, Juan Posadas, believed the human race must "appeal to the beings on other planets...to intervene and collaborate with Earth’s inhabitants in suppressing poverty;" i.e., Posadas wished to collaborate with extraterrestrials in order to create a Socialist system on Earth.[52] The adoption of this belief among Posadists, who had previously been a significant political force in South America, has been noted as a contributing factor in their decline.[53]

Further information: Unsolved:Identification studies of UFOs and Unsolved:List of investigations of UFOs by governments

Starting in the 1940s, investigations, studies, and conferences related to ufology were sponsored by governmental agencies and private groups. Typically motivated by visual UFO sightings, the goals of these studies included critical evaluation of the observational evidence, attempts to resolve and identify the observed events, and the development of policy recommendations. These studies include Project Sign, Project Magnet, Project Blue Book, the Robertson Panel, and the Condon Committee in the United States, the Flying Saucer Working Party and Project Condign in Britain, GEIPAN in France, and Project Hessdalen in Norway. Private studies of UFO phenomena include those produced by the RAND Corporation in 1968,[54] Harvey Rutledge of the University of Missouri from 1973-1980,[55][56] and the National Press Club's Disclosure Project in 2001.[57][58][59] Additionally, the United Nations from 1977-1979 sponsored meetings and hearings concerning UFO sightings.[60][61] In August 2020, the United States Department of Defense established the Unidentified Aerial Phenomena Task Force to detect, analyze and catalog unidentified aerial phenomena that could potentially pose a threat to U.S. national security.[62]

A large number of private organizations dedicated to the study, discussion, and publicity of ufology and other UFO-related topics exist throughout the world, including the United States, the United Kingdom, Australia, and Switzerland. Along with such "pro-UFO" groups are skeptic organizations that emphasize the pseudoscientific nature of ufology.

During the annual World UFO Day (July 2), ufologists and associated organizations raise public awareness of ufology, in an effort to "tell the truth about earthly visits from outer space aliens."[63][64] The day's events include group gatherings to search for and observe UFOs.[65][66]

Academic books about ufology as a sociological and historical phenomenon