Octans (/ˈɒktænz/) is a faint constellation located in the deep Southern Sky. Its name is Latin for the eighth part of a circle, but it is named after the octant, a navigational instrument. Devised by French astronomer Nicolas Louis de Lacaille in 1752, Octans remains one of the 88 modern constellations.

Octans was one of 14 constellations created by French astronomer Nicolas Louis de Lacaille during his expedition to the Cape of Good Hope, and was originally named l’Octans de Reflexion (“the reflecting octant”) in 1752, after he had observed and catalogued almost 10,000 southern stars during a two-year stay at the Cape of Good Hope. He devised fourteen new constellations in uncharted regions of the Southern Celestial Hemisphere not visible from Europe. All but one honoured instruments that symbolised the Age of Enlightenment.[lower-alpha 1][1]

It was part of his catalogue of the southern sky, the Coelum Australe Stelliferum, which was published posthumously in 1763. In Europe, it became more widely known as Octans Hadleianus, in honor of England mathematician John Hadley, who invented the octant in 1730. There is no real mythology related to Octans, partially due to its faintness and relative recentness, but mostly because of its extreme southerly latitude.[2] 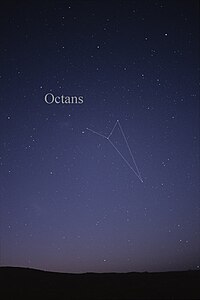 The constellation Octans as it can be seen by the naked eye.

Octans is a very faint constellation; its brightest member is Nu Octantis, a spectral class K1 III giant star with an apparent magnitude 3.73. It is 63.3 ± 0.8 light-years distant from Earth.[3]

Beta Octantis is the second brightest star in the constellation.

Sigma Octantis, the southern pole star, is a magnitude 5.4 star just over 1 degree away from the true South Celestial Pole. Its relative faintness means that it is not practical for navigation.[4] Conveniently for navigators, there are other, much easier methods for locating the southern celestial pole.

For example, the constellation Crux, the Southern Cross, currently points toward the South Celestial Pole, if one draws a line from Gamma Crucis to Alpha Crucis. Another method includes an asterism made up of Sigma, Chi, Tau, and Upsilon Octantis, which form a distinctive trapezoid shape.

BQ Octantis is a fainter, magnitude 6.82 star located much closer to the South Pole (at less than a degree) than Sigma.

The Astronomical Society of Southern Africa in 2003 reported that observations of the Mira variable stars R and T Octantis were urgently needed.[5]

NGC 2573 (also known as Polarissima Australis) is a faint barred spiral galaxy that happens to be the closest NGC object to the South Celestial Pole. NGC 7095 and NGC 7098 are two barred spiral galaxies that are 115 million and 95 million light-years distant from Earth respectively. The sparse open cluster Collinder 411 is also located in the constellation.