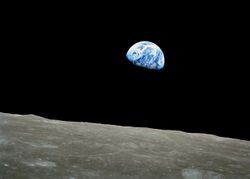 Earthrise (Dec. 1968). Astronaut Bill Anders recalled, "When I looked up and saw the Earth coming up on this very stark, beat-up Moon horizon, I was immediately almost overcome with the thought, 'Here we came all this way to the Moon, and yet the most significant thing we’re seeing is our own home planet, the Earth.'"[1]

The overview effect is a cognitive shift[Note 1] reported by some astronauts while viewing the Earth from space.[2] Researchers have characterized the effect as "a state of awe with self-transcendent qualities, precipitated by a particularly striking visual stimulus".[3] The most prominent common aspects of personally experiencing the Earth from space are appreciation and perception of beauty, unexpected and even overwhelming emotion, and an increased sense of connection to other people and the Earth as a whole.[3] The effect can cause changes in the observer’s self concept and value system, and can be transformative.[3] With recognition of the cost and environmental pollution involved in actual space travel, immersive virtual reality simulations have been designed to try to induce the overview effect in earthbound participants.[1] 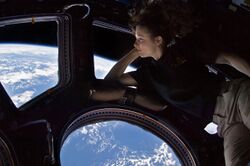 Astronaut Tracy Caldwell Dyson "Earth gazing" in the Cupola module of the International Space Station, a practice found to have positive psychological effects, one that is especially important in coping with the demands of spaceflight.[4]

Broadly, Yaden et al. (2016) state that the most prominent common aspects of the astronauts' experience were appreciation and perception of beauty, unexpected and even overwhelming emotion, and an increased sense of connection to other people and the Earth as a whole.[3] Yaden et al. proposed that the overview effect can be understood in terms of awe[Note 2] and self-transcendence,[Note 3] which they describe as "among the deepest and most powerful aspects of the human experience".[3] More specifically, they write that the effect might best be understood as "a state of awe with self-transcendent qualities, precipitated by a particularly striking visual stimulus".[3] Yaden posited that the overview effect triggers awe through both perceptual vastness (like seeing the Grand Canyon) and conceptual vastness (like contemplating big ideas like infinity).[5]

Yaden et al. (2016) write that some astronauts viewing Earth from space "report overwhelming emotion and feelings of identification with humankind and the planet as a whole".[3] The effect can cause changes in the observer’s self concept and value system, and is sometimes transformative".[3] Though astronaut Leland Melvin said the effect seems to take hold of astronauts regardless of culture or nation of origin,[6] Yaden et al. observed that cultural differences, including differences in religious and social identity, affect the ways in which the effect is experienced and interpreted.[3] Expressions range from the religious, to the "vaguely spiritual", to the naturalistic, to calls to social duty.[3]

Author Frank White, who in the 1980s coined the term overview effect after interviewing many astronauts, said that the overview effect is "beyond words", requiring experience to understand, even likening it in this regard to Zen Buddhism.[7] He said that astronauts' very first views of the planet were generally very significant, adding that some experience the effect "in a moment" while in others it grows over time; and generally that the effect "does accumulate".[7]

Not all astronauts experience the overview effect.[8] Further, White distinguished experiences in low Earth orbit where the planet takes up most of an astronaut's view, from experiences on the Moon in which one sees the whole Earth "against a backdrop of the entire cosmos".[7] He described a "big difference" between the original astronauts and the professional astronauts—focusing on missions—and people who are going into space recently—who are "going with an intention to have an experience" and who may already be aware of the overview effect.[9]

Astronaut Edgar Mitchell referred to the overview effect as the "big picture effect",[10] and Astronaut Ron Garan called it the "orbital perspective".[6] 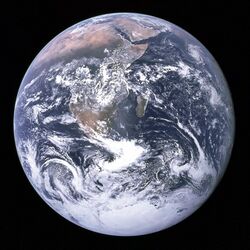 The Blue Marble—Earth as seen by the crew of Apollo 17 in 1972. Early photos of Earth taken from space inspired a mild version of the overview effect in earthbound non-astronauts, and became prominent symbols of environmental concern.[1]

English astronomer Fred Hoyle wrote in 1948 that, "once a photograph of the Earth, taken from the outside, is available, a new idea as powerful as any in history will be let loose".[1] After Apollo 8 astronaut William Anders' December 1968 Earthrise photograph of the Earth from lunar orbit, the Apollo missions were credited with inspiring the environmental movement, the first Earth Day being held in April 1970.[1] Hoyle said that people suddenly seemed to care about protecting Earth's natural environment, though others attribute that awareness to Rachel Carson's 1962 book Silent Spring and reactions to several environmental disasters in the 1960s.[1]

The term overview effect was coined by self-described "space philosopher" Frank White, who said he thought he first had "a mild experience" of the effect while flying across the country and looking out the aircraft's window.[7] That experience led him to imagine living in an O'Neill cylinder (habitat in space), which inspired him to become involved with the Space Studies Institute and begin speaking with astronauts.[7]

White's astronaut interviews confirmed the importance of the difference between intellectual knowledge versus experience, of perceiving the "striking thinness of the atmosphere", of thinking of ourselves interconnected and part of the Earth as an organic system, and that we as different people "are all in this together".[7] The first public use of the term was in a poster in at a Space Studies Institute meeting in 1985.[9] Eventually, White wrote about the effect in his book The Overview Effect — Space Exploration and Human Evolution (1987),[11] which has a fourth edition (2021).[9] White's work did not attain broad influence until the 2010s—a period of increased societal divisions and a new prospect of private space travel.[12] 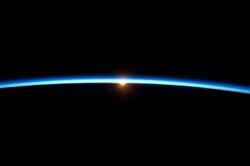 The Thin Blue Line photograph was taken from the International Space Station in 2009.[13] Author Frank White's description of interviews with astronauts emphasized their perception of the "striking thinness of the atmosphere".[7]

Michael Collins (Apollo 11; 1969) said that "the thing that really surprised me was that it [Earth] projected an air of fragility. And why, I don't know. I don't know to this day. I had a feeling it's tiny, it's shiny, it's beautiful, it's home, and it's fragile.[14]

Edgar Mitchell (Apollo 14; 1971) described it as an "explosion of awareness" and an "overwhelming sense of oneness and connectedness... accompanied by an ecstasy... an epiphany".[3]

William Shatner (Blue Origin NS-18; 2021) said that "all of a sudden, as though you whip a sheet off you when you’re asleep, and you're looking into blackness, into black ugliness. And you look down. There's the blue down there and the black up there. And there is mother Earth and comfort. And up there... Is that death? I don't know."[22]

Researchers have recognized that awe-based experiences—such as interaction with nature, religious or spiritual or mystical experiences, meditation, and peak and flow experiences during high task performance—can change a person and promote the feeling of unity or interconnectedness.[2] Besides being an enjoyable experience, such phenomena can have short and long-term positive outcomes such as increased well-being, pro-social and pro-environmental attitudes, and improved physical health.[2] The self-transcendent experience can cause long-term changes in personal outlook, and can influence peoples' very sense of self by affecting their self-schema[Note 4] ("the particular framework through which (people) imagine themselves in relation to the world").[3]

Images of Earth taken from space, which can cause a mild version of the overview effect, have become prominent symbols of environmental concern.[1] Shown: Earth Day demonstration, 2010.

Specifically, Frank White noted that upon return, some astronauts became involved in humanitarian activities, or became artists, with astronaut Edgar Mitchell founding the Institute of Noetic Sciences.[7] Though Yaden et al. (2016) noted that the experience can be transformative,[3] White said in 2019 that generally there was no "dramatic transformation" or "marching in peace parades"; that the lasting effect was more subtle.[7]

A 2018 questionnaire survey of 39 astronauts and cosmonauts found that humanistic changes predominated over spiritual changes.[23] In particular, the survey found a moderate degree of change in the Perceptions of Earth subscale (Earth as "a beautiful, fragile object to be treasured"), which significantly correlated with subsequent involvement in environmental causes.[23] In contrast, the survey found "no to very small change" in the Spiritual Change subscale, which the researchers said likely reflected established pre-launch values.[23]

At one point the Skylab IV (1970s) crew refused to work, asserting, in the flight director’s words, "their needs to reflect, to observe, to find their place amid these baffling, fascinating, unprecedented experiences".[3] This event, plus research indicating that actively photographing the Earth has positive psychological effects, caused Yaden et al. to posit that studying the overview effect might improve understanding of psychological well-being in isolated, confined, extreme (ICE) environments such as space flight.[3]

Early photos of Earth taken from space have inspired a mild version of the overview effect in earthbound viewers.[1] The images became prominent symbols of environmental concern and have been credited for raising the public's consciousness about the fragility of Earth and expanding concern for long-term survival on a finite planet.[1]

The accumulating experience of astronauts and space tourists inspires in many of them a strong desire to protect the Earth by actively communicating their broadened perspective, for example by speaking at international climate summits.[1] Virgin Galactic officials specifically cite the overview effect as a motivation for carrying people to the edge of space, to fundamentally change the way people think about their home world.[24] Critics note, however, that the space travel needed to personally experience the full overview effect, itself involves significant environmental pollution.[1] A less polluting approach is to simulate the effect on earth, with virtual reality technology.[1]

Researchers have found that virtual reality (VR) technology elicits components of awe-based experiences and can induce minor cognitive shifts in participants' world views similar to those of the overview effect.[2] Perceived safety, personal background and familiarity with the environment, and induction of a small visceral fear reaction, were found to be key contributors to the immersive experience.[2] VR studies through 2019 had not observed a transformative experience on a scale similar to the overview effect itself, but VR experience can trigger profound emotional responses such as awe.[2]

A 2019 study found that a virtual experience invoked "minor transformative experiences in some participants", including appreciation of beauty and vastness, realization of interconnectedness, and a potential intent to change one’s behavior.[2] Recognizing the relatively early state of VR technology, the researchers urged using knowledge of profound transformative experiences to motivate the design of VR installations, and thereafter study the VR experience itself as its own phenomenon.[2]

On December 24, 2018—the fiftieth anniversary of the first day on which humans saw an earthrise with their own eyes—the Spacebuzz project was unveiled in Hilversum, Netherlands.[25] Within a mobile, rocket-shaped vehicle more than 15 metres (49 ft) in length, Spacebuzz's nine moving seats and virtual reality (VR) headsets simulate spaceflight in an experience designed especially for children.[25]

Researchers at the University of Missouri tried to reproduce the experience with a water-filled flotation tank, half a tonne of Epsom salts, and a waterproof VR headset.[8]

"The Infinite" provides an hour-long simulation of being on the International Space Station using 360-degree, 3D, astronaut-recorded footage from the VR film Space Explorers: The ISS Experience.[26] Visitors share a 12,500 square foot (1150 square meter) area allowing them to physically explore the ISS and look outside.[26]

A three-dimensional model of the Earth 7 metres (23 ft) in diameter, created from detailed NASA imagery and appearing to float in the air, toured the U.K. in 2022, the installation "aim(ing) to create a sense of the Overview Effect".[27]

Anthropologist Deana L. Weibel introduced the term ultraview effect as a response to an unobscured view of stars, an effect that she concluded was experienced more rarely than the overview effect.[28] Contrasted from the overview effect's sense of connection, the ultraview effect responds to the limitations of our knowledge, causing "a transformative sense of incomprehension and a feeling of shrinking or self-diminution".[28]

Frank White posited the term Copernicus Perspective—awareness of being part of the Solar System when one is on another planet.[9]