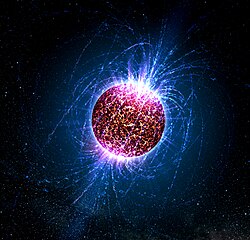 Artist's illustration of an 'isolated neutron star' -- one without associated supernova remnants or binary companions.

A radio-quiet neutron star is a neutron star that does not seem to emit radio emissions, but is still visible to Earth through electromagnetic radiation at other parts of the spectrum, particularly X-rays and gamma rays.

Most detected neutron stars are pulsars, and emit radio-frequency electromagnetic radiation. About 700 radio pulsars are listed in the Princeton catalog, and all but one emit radio waves at the 400 MHz and 1400 MHz frequencies.[1] That exception is Geminga, which is radio quiet at frequencies above 100 MHz,[2] but is a strong emitter of X-rays and gamma rays.[1]

Quark stars, theoretical neutron star-like objects composed of quark matter, may be radio quiet, according to some theories.

The group of radio-quiet neutrons stars informally known as the Magnificent Seven are thought to emit mainly thermal radiation.[3]

Magnetars, the most widely accepted explanation for soft gamma repeaters (SGRs) and anomalous X-ray pulsars (AXPs), are often characterized as being radio-quiet.[5] However, magnetars can produce radio emissions, but the radio spectrums tend to be flat, with only intermittent broad pulses of variable length.[6]

Defined as thermally emitting neutron stars of high magnetic fields, although lower than that of magnetars.[7] Identified in thermal X-rays, and thought to be radio-quiet.[11]

Compact Central Objects in Supernova remnants (CCOs in SNRs) are identified as being radio-quiet compact X-ray sources surrounded by supernova remnants.[1][9] They have thermal emission spectra,[12] and lower magnetic fields than XDINSs and magnetars.[7]