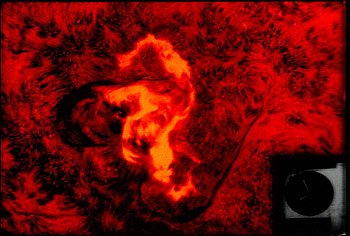 The solar storms of August 1972 were a historically powerful series of solar storms with intense to extreme solar flare, solar particle event, and geomagnetic storm components in early August 1972, during solar cycle 20. The storm caused widespread electric‐ and communication‐grid disturbances through large portions of North America as well as satellite disruptions. On August 4, 1972, the storm caused the accidental detonation of numerous U.S. naval mines near Haiphong, North Vietnam.[1] The coronal cloud's transit time from the Sun to the Earth is the fastest ever recorded.[2]

The most significant detected solar flare activity occurred from August 2 to August 11. Most of the significant solar activity emanated from active sunspot region McMath 11976 (MR 11976; sunspot regions being clusters of sunspot pairs).[3][4][5][6] McMath 11976 was extraordinarily magnetically complex. Its size was large although not exceptionally so.[7] McMath 11976 produced 67 solar flares (4 of these X-class) during the time it was facing Earth, from July 29 to August 11.[8] It also produced multiple relatively rare white light flares over multiple days.[1] The same active area was long-lived. It persisted through five solar rotation cycles, first receiving the designation as Region 11947 as it faced Earth, going unseen as it rotated the far side of the Sun, then returning Earthside as Region 11976, before cycling as Regions 12007, 12045, and 12088, respectively.[9]

The August 4 flare which triggered the extreme solar particle event (SPE) around and intense geomagnetic storm on Earth was among the largest documented by science.[10] This flare saturated the Solrad 9 X-ray sensor at approximately X5.3 but was estimated to be in the vicinity of X20,[11] the threshold of the very rarely reached R5 on the NOAA radio blackout space weather scale.[12] A radio burst of 76,000 sfu was measured at 1 GHz.[8] This was an exceptionally long duration flare, generating X-ray emissions above background level for more than 16 hours. Rare emissions in the gamma ray ([math]\displaystyle{ \gamma }[/math]-ray) spectrum were detected for the first time, on both August 4 and August 7, by the Orbiting Solar Observatory (OSO 7).[13] The broad spectrum electromagnetic emissions of the largest flare are estimated to total 1-5 x 1032 ergs in energy released.[14]

The arrival time of the associated coronal mass ejection (CME) and its coronal cloud, 14.6 hours, remains the record shortest duration as of November 2018, indicating an exceptionally fast and typically geoeffective event (normal transit time is two to three days). A preceding series of solar flares and CMEs cleared the interplanetary medium of particles, enabling the rapid arrival in a process similar to the solar storm of 2012.[2] Normalizing the transit times of other known extreme events to a standard 1 AU to account for the varying distance of the Earth from the Sun throughout the year, one study found the ultrafast August 4 flare to be an outlier to all other events, even compared to the great solar storm of 1859, the overall most extreme known solar storm which is also known as the "Carrington event".[15] This corresponds to an ejecta speed of an estimated 2,850 km/s (1,770 mi/s).[16]

The near Earth vicinity solar wind velocity may also be record-breaking and is calculated to have exceeded 2,000 km/s (1,200 mi/s). The velocity was not directly measurable as instrumentation was off-scale high.[17][18] Analysis of a Guam magnetogram indicated a shockwave traversing the magnetosphere at 3,080 km/s (1,910 mi/s) and astonishing sudden storm commencement (SSC) time of 62 s.[19] Estimated magnetic field strength of 73-103 nT and electric field strength of >200 mV/m was calculated at 1 AU.[20]

Reanalysis based on IMP-5 (a.k.a. Explorer 41) space solar observatory data suggests that >10‐MeV ion flux reached 70,000 cm−2 s−1 sr−1 bringing it near the exceedingly rarely reached NOAA S5 level on the solar radiation scale.[12] Fluxes at other energy levels, from soft to hard, at >1 MeV, >30 MeV, and >60 MeV, also reached extreme levels, as well as inferred for >100 MeV.[21][1] The particle storm led to northern hemisphere polar stratospheric ozone depletion of about 46% at 50 km (31 mi) altitude for several days before the atmosphere recovered and which persisted for 53 days at the lower altitude of 39 km (24 mi).[22]

The intense solar wind and particle storm associated with the CMEs led to one of the largest decreases in cosmic ray radiation from outside the Solar System, known as a Forbush decrease, ever observed.[23] Solar energetic particle (SEP) onslaught was so strong that the Forbush decrease in fact partially abated.[24] SEPs reached the Earth's surface, causing a ground level event (GLE).[25]

The August 4 flare and ejecta caused significant to extreme effects on the Earth's magnetosphere, which responded in an unusually complex manner.[1] The disturbance storm time index (Dst) was only -125 nT, falling merely within the relatively common "intense" storm category. Initially an exceptional geomagnetic response occurred and some extreme storming occurred locally later (some of these possibly within substorms), but arrival of subsequent CMEs with northward oriented magnetic fields is thought to have shifted the interplanetary magnetic field (IMF) from an initial southward to northward orientation, thus substantially suppressing geomagnetic activity as the solar blast was largely deflected away from rather toward Earth. An early study found an extraordinary asymmetry range of ≈450 nT.[26] A 2006 study found that if a favorable IMF southward orientation were present that the Dst may have surpassed 1,600 nT, comparable to the 1859 Carrington event.[27]

The magnetosphere compressed rapidly and substantially with the magnetopause reduced to 4-5 RE and the plasmapause (boundary of the plasmasphere, or lower magnetosphere) reduced to 2 RE or less. This is a contraction of at least one half and up to two-thirds the size of the magnetosphere under normal conditions, to a distance of less than 20,000 km (12,000 mi).[31] Solar wind dynamic pressure increased to about 100 times normal, based upon data from Prognoz 1.[32]

On August 4, an aurora shone so luminously that shadows were cast on the southern coast of the United Kingdom [1] and shortly later as far south as Bilbao, Spain at magnetic latitude 46°.[38] Extending to August 5, intense geomagnetic storming continued with bright red (a relatively rare color associated with extreme events) and fast-moving aurora visible at midday from dark regions of the Southern Hemisphere.[39]

Radio frequency (RF) effects were rapid and intense. Blackouts commenced nearly instantaneously on the sunlit side of Earth on HF and other vulnerable bands. A nighttime mid-latitude E layer developed.[40]

Geomagnetically induced currents (GICs) were generated and produced significant electrical grid disturbances throughout Canada and across much of eastern and central United States, with strong anomalies reported as far south as Maryland and Ohio, moderate anomalies in Tennessee , and weak anomalies in Alabama and north Texas . The voltage collapse of 64% on the North Dakota to Manitoba interconnection would have been sufficient to cause a system breakup if occurring during high export conditions on the line, which would have precipitated a large power outage. Many U.S. utilities in these regions reported no disturbances, with presence of igneous rock geology a suspected factor, as well as geomagnetic latitude and differences in operational characteristics of respective electrical grids.[41] Manitoba Hydro reported that power going the other way, from Manitoba to the U.S., plummeted 120 MW within a few minutes. Protective relays were repeatedly activated in Newfoundland.[1]

An outage was reported along American Telephone and Telegraph (now AT&T)'s L4 coaxial cable between Illinois and Iowa. Magnetic field variations (dB/dt) of ≈800 nT/min were estimated locally at the time[31] and the peak rate of change of magnetic field intensity reached >2,200 nT/min in central and western Canada, although the outage was most likely caused by swift intensification of the eastward electrojet of the ionosphere.[42] AT&T also experienced a surge of 60 volts on their telephone cable between Chicago and Nebraska.[34] Exceeding the high-current shutdown threshold, an induced electric field was measured at 7.0 V/km. The storm was detected in low-latitude areas such as the Philippines and Brazil, as well as Japan.[1]

The United States Air Force 's Vela nuclear detonation detection satellites mistook that an explosion occurred, but this was quickly dealt with by personnel monitoring the data in real-time.[1]

The U.S. Navy concluded, as shown in declassified documents,[43] that the seemingly spontaneous detonation of dozens of Destructor magnetic-influence sea mines (DSTs) within about 30 seconds in the Hon La area (magnetic latitude ≈9°) was highly likely the result of an intense solar storm. One account claims that 4,000 mines were detonated.[44] It was known that solar storms caused terrestrial geomagnetic disturbances but it was as yet unknown to the military whether these effects could be sufficiently intense. It was confirmed as possible in a meeting of Navy investigators at the NOAA Space Environment Center (SEC)[2] as well as by other facilities and experts.[1]

Occurring between Apollo missions, the storm has long been chronicled within NASA. Apollo 16 had returned home in April, and the final Apollo mission was a Moon landing planned for the following December. Those inside an Apollo command module would be shielded from 90% of incoming radiation, which could still have exposed astronauts to radiation sickness if they were located outside the protective magnetic field of Earth, which was the case for much of a lunar mission. A moonwalker or one on EVA in orbit could have faced severe acute illness and potentially a nearly universally fatal dose. An enhanced risk of contracting cancer would have been unavoidable regardless of the location of astronauts or spacecraft. This is one of only a handful of solar storms occurring in the Space Age that could cause severe illness, and was the most hazardous thus far.[45] Had the most intense solar activity of early August occurred during a mission it would have forced contingency measures up to an emergency return landing for medical treatment.[46]

Implications for heliophysics and society

The storm was an important event in the field of heliophysics, the study of space weather, with numerous studies published in the next few years and throughout the 1970s and 1980s, as well as leading to several influential internal investigations and to significant policy changes. Almost fifty years after the fact, the storm was reexamined in an October 2018 article published in the American Geophysical Union (AGU) journal Space Weather. The initial and early studies as well as the later reanalysis studies were only possible due to initial monitoring facilities installed during the International Geophysical Year (IGY) in 1957-1958 and subsequent global scientific cooperation to maintain the data sets. That initial terrestrial data from ground stations and balloons was later combined with spaceborne observatories to form far more complete information than had been previously possible, with this storm being one of the first widely documented of the then young Space Age. It convinced both the military and NASA to take space weather seriously and accordingly devote resources to its monitoring and study.[1]

The authors of the 2018 paper compared the 1972 storm to the great storm of 1859 in some aspects of intensity. They posit that it was a Carrington‐class storm.[1] Other researchers conclude that the 1972 event could have been comparable to 1859 for geomagnetic storming if magnetic field orientation parameters were favorable,[20][47] or as a "failed Carrington-type storm" based on related considerations,[48] which is also the finding of a 2013 Royal Academy of Engineering report.[49]