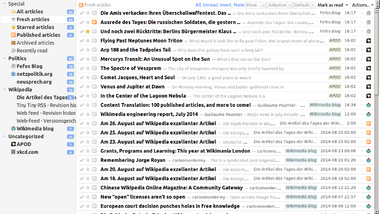 User interface of a feed reader

The name Atom applies to a pair of related Web standards. The Atom Syndication Format is an XML language used for web feeds, while the Atom Publishing Protocol (AtomPub or APP) is a simple HTTP-based protocol for creating and updating web resources.[1]

Web feeds allow software programs to check for updates published on a website. To provide a web feed, the site owner may use specialized software (such as a content management system) that publishes a list (or "feed") of recent articles or content in a standardized, machine-readable format. The feed can then be downloaded by programs that use it, like websites that syndicate content from the feed, or by feed reader programs that allow internet users to subscribe to feeds and view their content.

A feed contains entries, which may be headlines, full-text articles, excerpts, summaries or links to content on a website along with various metadata.

The Atom format was developed as an alternative to RSS. Ben Trott, an advocate of the new format that became Atom, believed that RSS had limitations and flaws—such as lack of on-going innovation and its necessity to remain backward compatible—and that there were advantages to a fresh design.[1]

The blogging community uses web feeds to share recent entries' headlines, full text, and even attached multimedia files.[2] The providers allow other websites to incorporate a blog's "syndicated" headline or headline-and-short-summary feeds under various usage agreements. (As of 2016) people use Atom and other web-syndication formats for many purposes, including journalism, marketing, bug-reports, or any other activity involving periodic updates or publications. Atom also provides a standard way to export an entire blog, or parts of it, for backup or for importing into other blogging systems.

It is common to find web feeds on major websites, as well as on many smaller ones. Some websites let people choose between RSS- or Atom-formatted web feeds; others offer only RSS or only Atom. In particular, many blog and wiki sites offer their web feeds in the Atom format.

A feed reader or "aggregator" program can be used to check feeds and to display new articles. Client-side readers may also be designed as standalone programs or as extensions to existing programs like web browsers.

When Atom emerged as a format intended to rival or replace RSS, CNET described the motivation of its creators as follows: "Winer's opponents are seeking a new format that would clarify RSS ambiguities, consolidate its multiple versions, expand its capabilities, and fall under the auspices of a traditional standards organization."[3]

A brief description of some of the ways Atom 1.0 differs from RSS 2.0 has been given by Tim Bray, who played a major role in the creation of Atom:[4]

The RSS 2.0 specification relies on the use of RFC 822 formatted timestamps to communicate information about when items in the feed were created and last updated. The Atom working group chose instead to use timestamps formatted according to the rules specified by RFC 3339 (which is a subset of ISO 8601; see Appendix A in RFC 3339 for differences).

Atom also differs from RSS in that it supports the use of Internationalized Resource Identifiers, which allow links to resources and unique identifiers to contain characters outside the US ASCII character set.

The elements of the RSS vocabulary are not generally reusable in other XML vocabularies. The Atom syntax was specifically designed to allow elements to be reused outside the context of an Atom feed document. For instance, it is not uncommon to find atom:link elements being used within RSS 2.0 feeds.

Despite the emergence of Atom as an IETF Proposed Standard and the decision by major companies such as Google to embrace Atom, use of the older and better-known RSS formats has continued. There are several reasons for this:

Before the creation of Atom the primary method of web content syndication was the RSS family of formats.

Members of the community who felt there were significant deficiencies with this family of formats were unable to make changes directly to RSS 2.0 because the official specification document stated that it was purposely frozen to ensure its stability.[8]

In June 2003, Sam Ruby set up a wiki to discuss what makes "a well-formed log entry".[9] This initial posting acted as a rallying point.[10] People quickly started using the wiki to discuss a new syndication format to address the shortcomings of RSS. It also became clear that the new format could form the basis of a more robust replacement for blog editing protocols such as the Blogger API and LiveJournal XML-RPC Client/Server Protocol as well.

The project aimed to develop a web syndication format that was:[11]

After this point, discussion became chaotic, due to the lack of a decision-making process. The project also lacked a name, tentatively using "Pie," "Echo," "Atom," and "Whatever" (PEAW)[14] before settling on Atom. After releasing a project snapshot known as Atom 0.2 in early July 2003, discussion was shifted off the wiki.

Atom 0.3 and adoption by Google

The discussion then moved to a newly set up mailing list. The next and final snapshot during this phase was Atom 0.3, released in December 2003. This version gained widespread adoption in syndication tools, and in particular it was added to several Google-related services, such as Blogger, Google News, and Gmail. Google's Data APIs (Beta) GData are based on Atom 1.0 and RSS 2.0.

In 2004, discussions began about moving the project to a standards body such as the World Wide Web Consortium or the Internet Engineering Task Force (IETF). The group eventually chose the IETF and the Atompub working group[15] was formally set up in June 2004, finally giving the project a charter and process. The Atompub working group is co-chaired by Tim Bray (the co-editor of the XML specification) and Paul Hoffman. Initial development was focused on the syndication format.

Example of an Atom 1.0 feed

An example of a document in the Atom Syndication Format:

The following tag should be placed into the head of an HTML document to provide a link to an Atom feed.