Anaxagoras (/ˌænækˈsæɡərəs/; Greek: Ἀναξαγόρας, Anaxagoras, "lord of the assembly"; c. 500[3] – c. 428 BC) was a Pre-Socratic Greek philosopher. Born in Clazomenae at a time when Asia Minor was under the control of the Persian Empire, Anaxagoras came to Athens. According to Diogenes Laërtius and Plutarch, in later life he was charged with impiety and went into exile in Lampsacus; the charges may have been political, owing to his association with Pericles, if they were not fabricated by later ancient biographers.[4]

Responding to the claims of Parmenides on the impossibility of change, Anaxagoras described the world as a mixture of primary imperishable ingredients, where material variation was never caused by an absolute presence of a particular ingredient, but rather by its relative preponderance over the other ingredients; in his words, "each one is... most manifestly those things of which there are the most in it".[5] He introduced the concept of Nous (Cosmic Mind) as an ordering force, which moved and separated out the original mixture, which was homogeneous, or nearly so.

He also gave a number of novel scientific accounts of natural phenomena. He deduced a correct explanation for eclipses and described the Sun as a fiery mass larger than the Peloponnese, as well as attempting to explain rainbows and meteors.

Anaxagoras is believed to have enjoyed some wealth and political influence in his native town of Clazomenae. However, he supposedly surrendered this out of a fear that they would hinder his search for knowledge.[6] The Roman author Valerius Maximus preserves a different tradition: Anaxagoras, coming home from a long voyage, found his property in ruin, and said: "If this had not perished, I would have"—a sentence described by Valerius as being "possessed of sought-after wisdom!"[7][8]

Anaxagoras was a Greek citizen of the Persian Empire and had served in the Persian army; he may have been a member of the Persian regiments that entered mainland Greece during the Greco-Persian Wars.[9] Though this remains uncertain, "it would certainly explain why he came to Athens in the year of Salamis, 480/79 B.C."[9] Anaxagoras is said to have remained in Athens for thirty years. Pericles learned to love and admire him, and the poet Euripides derived from him an enthusiasm for science and humanity.[6]

Anaxagoras brought philosophy and the spirit of scientific inquiry from Ionia to Athens. His observations of the celestial bodies and the fall of meteorites led him to form new theories of the universal order, and to prediction of the impact of meteorites. Plutarch[10] says "Anaxagoras is said to have predicted that if the heavenly bodies should be loosened by some slip or shake, one of them might be torn away, and might plunge and fall down to earth". According to Pliny [11] he was credited with predicting the fall of the meteorite in 467.[12] He attempted to give a scientific account of eclipses, meteors, rainbows, and the Sun, which he described as a mass of blazing metal, larger than the Peloponnese; his theories about eclipses, the Sun and Moon may well have been based on observations of the eclipse of 463 BCE, which was visible in Greece.[13] He was the first to explain that the Moon shines due to reflected light from the Sun. He also said that the Moon had mountains and believed that it was inhabited. The heavenly bodies, he asserted, were masses of stone torn from the Earth and ignited by rapid rotation.[6] He was the first to give a correct explanation of eclipses, and was both famous and notorious for his scientific theories, including the claims that the Sun is a mass of red-hot metal, that the Moon is earthy, and that the stars are fiery stones.[14] He thought the Earth was flat and floated supported by 'strong' air under it and disturbances in this air sometimes caused earthquakes.[15] These speculations made him vulnerable in Athens to a charge of asebeia (impiety). Diogenes Laërtius reports the story that he was prosecuted by Cleon for impiety, but Plutarch says that Pericles sent his former tutor, Anaxagoras, to Lampsacus for his own safety after the Athenians began to blame him for the Peloponnesian war.[16]

The charges against Anaxagoras may have stemmed from his denial of the existence of a solar or lunar deity.[17] According to Laërtius, Pericles spoke in defense of Anaxagoras at his trial, c. 450.[18] Even so, Anaxagoras was forced to retire from Athens to Lampsacus in Troad (c. 434 – 433). He died there in around the year 428. Citizens of Lampsacus erected an altar to Mind and Truth in his memory, and observed the anniversary of his death for many years. They placed over his grave the following inscription: Here Anaxagoras, who in his quest of truth scaled heaven itself, is laid to rest.[lower-alpha 1]

Anaxagoras wrote a book of philosophy, but only fragments of the first part of this have survived, through preservation in work of Simplicius of Cilicia in the 6th century AD. 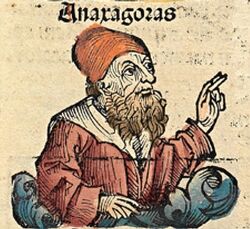 Anaxagoras, depicted as a medieval scholar in the Nuremberg Chronicle

According to Anaxagoras all things have existed in some way from the beginning, but originally they existed in infinitesimally small fragments of themselves, endless in number and inextricably combined throughout the universe. All things existed in this mass, but in a confused and indistinguishable form.[6] There was an infinite number of homogeneous parts (ὁμοιομερῆ) as well as heterogeneous ones.[20]

The work of arrangement, the segregation of like from unlike and the summation of the whole into totals of the same name, was the work of Mind or Reason (νοῦς). Mind is no less unlimited than the chaotic mass, but it stood pure and independent, a thing of finer texture, alike in all its manifestations and everywhere the same. This subtle agent, possessed of all knowledge and power, is especially seen ruling in all the forms of life.[21] Its first appearance, and the only manifestation of it which Anaxagoras describes, is Motion. It gave distinctness and reality to the aggregates of like parts.[6]

Decrease and growth represent a new aggregation (σὐγκρισις) and disruption (διάκρισις). However, the original intermixture of things is never wholly overcome.[6] Each thing contains in itself parts of other things or heterogeneous elements, and is what it is, only on account of the preponderance of certain homogeneous parts which constitute its character.[20] Out of this process arise the things we see in this world.[20]

Anaxagoras is mentioned by Socrates during his trial in Plato's "Apology". In the Phaedo, Plato portrays Socrates saying of Anaxagoras that as a young man: 'I eagerly acquired his books and read them as quickly as I could'.[22]

In a quote which begins Nathanael West's first book The Dream Life of Balso Snell (1931), Marcel Proust's character Bergotte says, "After all, my dear fellow, life, Anaxagoras has said, is a journey."

Anaxagoras appears as a character in The Ionia Sanction, by Gary Corby.

Anaxagoras is referred to and admired by Cyrus Spitama, the hero and narrator of Creation, by Gore Vidal. The book contains this passage, explaining how Anaxagoras became influential:

[According to Anaxagoras] One of the largest things is a hot stone that we call the sun. When Anaxagoras was very young, he predicted that sooner or later a piece of the sun would break off and fall to earth. Twenty years ago, he was proved right. The whole world saw a fragment of the sun fall in a fiery arc through the sky, landing near Aegospotami in Thrace. When the fiery fragment cooled, it proved to be nothing more than a chunk of brown rock. Overnight Anaxagoras was famous. Today his book is read everywhere. You can buy a secondhand copy in the Agora for a drachma.[23]

William H. Gass begins his novel, The Tunnel (1995), with a quote from Anaxagoras: "The descent to hell is the same from every place."

He is also mentioned in Seneca's Natural Questions (Book 4B, originally Book 3: On Clouds, Hail, Snow) It reads: "Why should I too allow myself the same liberty as Anaxagoras allowed himself?"

Chapter 5 in Book II of De Docta Ignorantia (1440) by Nicholas of Cusa is dedicated to the truth of the sentence "Each thing is in each thing" which he attributes to Anaxagoras.

Editions of the fragments