Short description: Aqueous solution of a weak acid and its conjugate base

A buffer solution (more precisely, pH buffer or hydrogen ion buffer) is an aqueous solution consisting of a mixture of a weak acid and its conjugate base, or vice versa. Its pH changes very little when a small amount of strong acid or base is added to it. Buffer solutions are used as a means of keeping pH at a nearly constant value in a wide variety of chemical applications. In nature, there are many living systems that use buffering for pH regulation. For example, the bicarbonate buffering system is used to regulate the pH of blood, and bicarbonate also acts as a buffer in the ocean. 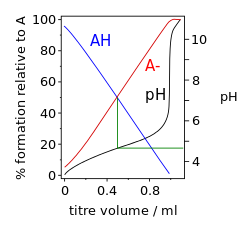 Figure 1. Simulated titration of an acidified solution of a weak acid (pKa = 4.7) with alkali

Buffer solutions resist pH change because of a chemical equilibrium between the weak acid HA and its conjugate base A−:

Once the acid is more than 95% deprotonated, the pH rises rapidly because most of the added alkali is consumed in the neutralization reaction. 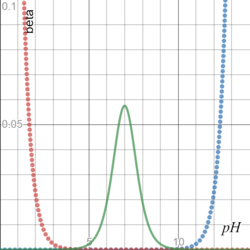 This equation shows that there are three regions of raised buffer capacity (see figure 2).

The pH of a solution containing a buffering agent can only vary within a narrow range, regardless of what else may be present in the solution. In biological systems this is an essential condition for enzymes to function correctly. For example, in human blood a mixture of carbonic acid (H2CO3) and bicarbonate (HCO−3) is present in the plasma fraction; this constitutes the major mechanism for maintaining the pH of blood between 7.35 and 7.45. Outside this narrow range (7.40 ± 0.05 pH unit), acidosis and alkalosis metabolic conditions rapidly develop, ultimately leading to death if the correct buffering capacity is not rapidly restored.

If the pH value of a solution rises or falls too much, the effectiveness of an enzyme decreases in a process, known as denaturation, which is usually irreversible.[5] The majority of biological samples that are used in research are kept in a buffer solution, often phosphate buffered saline (PBS) at pH 7.4.

In industry, buffering agents are used in fermentation processes and in setting the correct conditions for dyes used in colouring fabrics. They are also used in chemical analysis[4] and calibration of pH meters.

By combining substances with pKa values differing by only two or less and adjusting the pH, a wide range of buffers can be obtained. Citric acid is a useful component of a buffer mixture because it has three pKa values, separated by less than two. The buffer range can be extended by adding other buffering agents. The following mixtures (McIlvaine's buffer solutions) have a buffer range of pH 3 to 8.[6]

A mixture containing citric acid, monopotassium phosphate, boric acid, and diethyl barbituric acid can be made to cover the pH range 2.6 to 12.[7]

Other universal buffers are the Carmody buffer[8] and the Britton–Robinson buffer, developed in 1931.

First write down the equilibrium expression

This shows that when the acid dissociates, equal amounts of hydrogen ion and anion are produced. The equilibrium concentrations of these three components can be calculated in an ICE table (ICE standing for "initial, change, equilibrium").

% species formation calculated for a 10-millimolar solution of citric acid

When the difference between successive pKa values is less than about 3, there is overlap between the pH range of existence of the species in equilibrium. The smaller the difference, the more the overlap. In the case of citric acid, the overlap is extensive and solutions of citric acid are buffered over the whole range of pH 2.5 to 7.5.

Calculation of the pH with a polyprotic acid requires a speciation calculation to be performed. In the case of citric acid, this entails the solution of the two equations of mass balance:

CA is the analytical concentration of the acid, CH is the analytical concentration of added hydrogen ions, βq are the cumulative association constants. Kw is the constant for self-ionization of water. There are two non-linear simultaneous equations in two unknown quantities [A3−] and [H+]. Many computer programs are available to do this calculation. The speciation diagram for citric acid was produced with the program HySS.[10]

Cumulative association constants are used in general-purpose computer programs such as the one used to obtain the speciation diagram above.