Such vapor–liquid equilibrium information is useful in designing columns for distillation, especially fractional distillation, which is a particular specialty of chemical engineers.[1][2][3] Distillation is a process used to separate or partially separate components in a mixture by boiling (vaporization) followed by condensation. Distillation takes advantage of differences in concentrations of components in the liquid and vapor phases.

Binary mixtures are those having two components. Three-component mixtures are called ternary mixtures. There can be VLE data for mixtures with even more components, but such data is often hard to show graphically. VLE data is a function of the total pressure, such as 1 atm or at the pressure the process is conducted at.

When a temperature is reached such that the sum of the equilibrium vapor pressures of the liquid components becomes equal to the total pressure of the system (it is otherwise smaller), then vapor bubbles generated from the liquid begin to displace the gas that was maintaining the overall pressure, and the mixture is said to boil. This temperature is called the boiling point of the liquid mixture at the given pressure. (It is assumed that the total pressure is held steady by adjusting the total volume of the system to accommodate the specific volume changes that accompany boiling.) The boiling point at an overall pressure of 1 atm is called the normal boiling point of the liquid mixture.

The field of thermodynamics describes when vapor–liquid equilibrium is possible, and its properties. Much of the analysis depends on whether the vapor and liquid consist of a single component, or if they are mixtures.

If the liquid and vapor are pure, in that they consist of only one molecular component and no impurities, then the equilibrium state between the two phases is described by the following equations:

An equivalent, more common way to express the vapor–liquid equilibrium condition in a pure system is by using the concept of fugacity. Under this view, equilibrium is described by the following equation:

where P and T are the temperature and pressure for each phase, and [math]\displaystyle{ \bar{G}_i^\text{liq} }[/math] and [math]\displaystyle{ \bar{G}_i^\text{vap} }[/math]are the partial molar Gibbs free energy also called chemical potential (units of energy per amount of substance) within the liquid and vapor, respectively, for each phase. The partial molar Gibbs free energy is defined by:

where G is the (extensive) Gibbs free energy, and ni is the amount of substance of component i.

In multi-component mixtures in general with n components, this becomes: 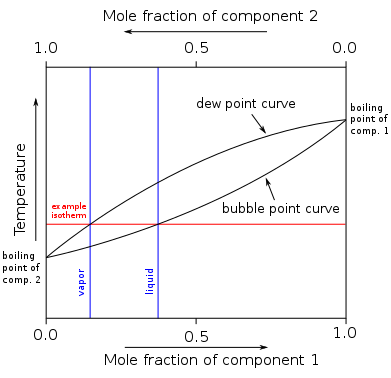 If one wants to represent a VLE data for a three-component mixture as a boiling point "diagram", a three-dimensional graph can be used. Two of the dimensions would be used to represent the composition mole fractions, and the third dimension would be the temperature. Using two dimensions, the composition can be represented as an equilateral triangle in which each corner represents one of the pure components. The edges of the triangle represent a mixture of the two components at each end of the edge. Any point inside the triangle represents the composition of a mixture of all three components. The mole fraction of each component would correspond to where a point lies along a line starting at that component's corner and perpendicular to the opposite edge. The bubble point and dew point data would become curved surfaces inside a triangular prism, which connect the three boiling points on the vertical temperature "axes". Each face of this triangular prism would represent a two-dimensional boiling-point diagram for the corresponding binary mixture. Due to their three-dimensional complexity, such boiling-point diagrams are rarely seen. Alternatively, the three-dimensional curved surfaces can be represented on a two-dimensional graph by the use of curved isotherm lines at graduated intervals, similar to iso-altitude lines on a map. Two sets of such isotherm lines are needed on such a two-dimensional graph: one set for the bubble point surface and another set for the dew point surface.

The tendency of a given chemical species to partition itself preferentially between liquid and vapor phases is the Henry's law constant. There can be VLE data for mixtures of four or more components, but such a boiling-point diagram is hard to show in either tabular or graphical form. For such multi-component mixtures, as well as binary mixtures, the vapor–liquid equilibrium data are represented in terms of K values (vapor–liquid distribution ratios)[1][2] defined by

where yi and xi are the mole fractions of component i in the phases y and x respectively.

where [math]\displaystyle{ \gamma_i }[/math] is the activity coefficient, Pi is the partial pressure and P is the pressure.

The values of the ratio Ki are correlated empirically or theoretically in terms of temperature, pressure and phase compositions in the form of equations, tables or graph such as the DePriester charts.[6]

For binary mixtures, the ratio of the K values for the two components is called the relative volatility denoted by α 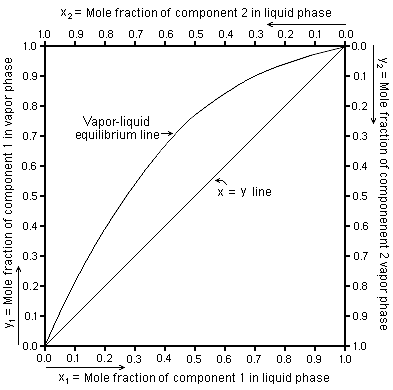 These types of VLE diagrams are used in the McCabe–Thiele method to determine the number of equilibrium stages (or theoretical plates) needed to distill a given composition binary feed mixture into one distillate fraction and one bottoms fraction. Corrections can also be made to take into account the incomplete efficiency of each tray in a distillation column when compared to a theoretical plate.

At boiling and higher temperatures the sum of the individual component partial pressures becomes equal to the overall pressure, which can symbolized as [math]\displaystyle{ P_\text{tot} }[/math].

Under such conditions, Dalton's law would be in effect as follows:

Then for each component in the vapor phase:

Raoult's law is approximately valid for mixtures of components between which there is very little interaction other than the effect of dilution by the other components. Examples of such mixtures includes mixtures of alkanes, which are non-polar, relatively inert compounds in many ways, so there is little attraction or repulsion between the molecules. Raoult's law states that for components 1, 2, etc. in a mixture:

where P o1, P o2, etc. are the vapor pressures of components 1, 2, etc. when they are pure, and x1, x2, etc. are mole fractions of the corresponding component in the liquid.

At a given Ptot such as 1 atm and a given liquid composition, T can be solved for to give the liquid mixture's boiling point or bubble point, although the solution for T may not be mathematically analytical (i.e., may require a numerical solution or approximation). For a binary mixture at a given Ptot, the bubble point T can become a function of x1 (or x2) and this function can be shown on a two-dimensional graph like a binary boiling point diagram.

At boiling temperatures if Raoult's law applies, a number of the preceding equations in this section can be combined to give the following expressions for vapor mole fractions as a function of liquid mole fractions and temperature:

In the case of a binary mixture, x2 = 1 − x1 and the above equations can be expressed as:

For many kinds of mixtures, particularly where there is interaction between components beyond simply the effects of dilution, Raoult's law does not work well for determining the shapes of the curves in the boiling point or VLE diagrams. Even in such mixtures, there are usually still differences in the vapor and liquid equilibrium concentrations at most points, and distillation is often still useful for separating components at least partially. For such mixtures, empirical data is typically used in determining such boiling point and VLE diagrams. Chemical engineers have done a significant amount of research trying to develop equations for correlating and/or predicting VLE data for various kinds of mixtures which do not obey Raoult's law well.