Short description: Molecule or surface that has no attraction to water 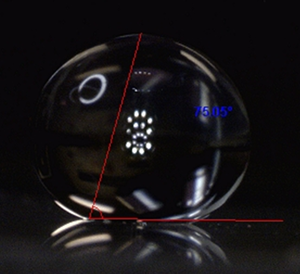 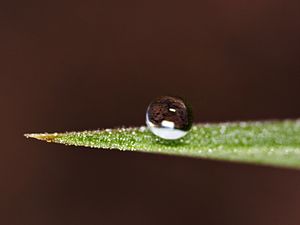 Water drops on the hydrophobic surface of grass

In chemistry, hydrophobicity is the physical property of a molecule that is seemingly repelled from a mass of water (known as a hydrophobe).[1] In contrast, hydrophiles are attracted to water.

Examples of hydrophobic molecules include the alkanes, oils, fats, and greasy substances in general. Hydrophobic materials are used for oil removal from water, the management of oil spills, and chemical separation processes to remove non-polar substances from polar compounds.[2]

Hydrophobic is often used interchangeably with lipophilic, "fat-loving". However, the two terms are not synonymous. While hydrophobic substances are usually lipophilic, there are exceptions, such as the silicones and fluorocarbons.

The term hydrophobe comes from the Ancient Greek ὑδρόφόβος (hýdrophóbos), "having a fear of water", constructed from grc ὕδωρ (húdōr) 'water', and grc φόβος (phóbos) 'fear'.[3]

The hydrophobic interaction is mostly an entropic effect originating from the disruption of the highly dynamic hydrogen bonds between molecules of liquid water by the nonpolar solute forming a clathrate-like structure around the non-polar molecules. This structure formed is more highly ordered than free water molecules due to the water molecules arranging themselves to interact as much as possible with themselves, and thus results in a higher entropic state which causes non-polar molecules to clump together to reduce the surface area exposed to water and decrease the entropy of the system.[4][5] Thus, the two immiscible phases (hydrophilic vs. hydrophobic) will change so that their corresponding interfacial area will be minimal. This effect can be visualized in the phenomenon called phase separation.

A water drop on a Lotus plant leaf.

Superhydrophobic surfaces, such as the leaves of the lotus plant, are those that are extremely difficult to wet. The contact angles of a water droplet exceeds 150°.[6] This is referred to as the lotus effect, and is primarily a physical property related to interfacial tension, rather than a chemical property.

In 1805, Thomas Young defined the contact angle θ by analyzing the forces acting on a fluid droplet resting on a solid surface surrounded by a gas.[7] 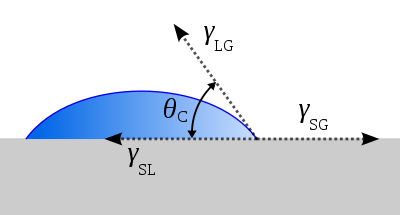 A liquid droplet rests on a solid surface and is surrounded by gas. The contact angle, θC, is the angle formed by a liquid at the three-phase boundary where the liquid, gas, and solid intersect.

θ can be measured using a contact angle goniometer.

Wenzel determined that when the liquid is in intimate contact with a microstructured surface, θ will change to θW*

where φ is the area fraction of the solid that touches the liquid.[10] Liquid in the Cassie–Baxter state is more mobile than in the Wenzel state.

We can predict whether the Wenzel or Cassie–Baxter state should exist by calculating the new contact angle with both equations. By a minimization of free energy argument, the relation that predicted the smaller new contact angle is the state most likely to exist. Stated in mathematical terms, for the Cassie–Baxter state to exist, the following inequality must be true.[11]

A new criterion for the switch between Wenzel and Cassie-Baxter states has been developed recently based on surface roughness and surface energy.[13] The criterion focuses on the air-trapping capability under liquid droplets on rough surfaces, which could tell whether Wenzel's model or Cassie-Baxter's model should be used for certain combination of surface roughness and energy.

Dettre and Johnson discovered in 1964 that the superhydrophobic lotus effect phenomenon was related to rough hydrophobic surfaces, and they developed a theoretical model based on experiments with glass beads coated with paraffin or TFE telomer. The self-cleaning property of superhydrophobic micro-nanostructured surfaces was reported in 1977.[16] Perfluoroalkyl, perfluoropolyether, and RF plasma -formed superhydrophobic materials were developed, used for electrowetting and commercialized for bio-medical applications between 1986 and 1995.[17][18][19][20] Other technology and applications have emerged since the mid 1990s.[21] A durable superhydrophobic hierarchical composition, applied in one or two steps, was disclosed in 2002 comprising nano-sized particles ≤ 100 nanometers overlaying a surface having micrometer-sized features or particles ≤ 100 micrometers. The larger particles were observed to protect the smaller particles from mechanical abrasion.[22]

In recent research, superhydrophobicity has been reported by allowing alkylketene dimer (AKD) to solidify into a nanostructured fractal surface.[23] Many papers have since presented fabrication methods for producing superhydrophobic surfaces including particle deposition,[24] sol-gel techniques,[25] plasma treatments,[26] vapor deposition,[24] and casting techniques.[27] Current opportunity for research impact lies mainly in fundamental research and practical manufacturing.[28] Debates have recently emerged concerning the applicability of the Wenzel and Cassie–Baxter models. In an experiment designed to challenge the surface energy perspective of the Wenzel and Cassie–Baxter model and promote a contact line perspective, water drops were placed on a smooth hydrophobic spot in a rough hydrophobic field, a rough hydrophobic spot in a smooth hydrophobic field, and a hydrophilic spot in a hydrophobic field.[29] Experiments showed that the surface chemistry and geometry at the contact line affected the contact angle and contact angle hysteresis, but the surface area inside the contact line had no effect. An argument that increased jaggedness in the contact line enhances droplet mobility has also been proposed.[30]

Many hydrophobic materials found in nature rely on Cassie's law and are biphasic on the submicrometer level with one component air. The lotus effect is based on this principle. Inspired by it, many functional superhydrophobic surfaces have been prepared.[31]

An example of a bionic or biomimetic superhydrophobic material in nanotechnology is nanopin film.

One study presents a vanadium pentoxide surface that switches reversibly between superhydrophobicity and superhydrophilicity under the influence of UV radiation.[32] According to the study, any surface can be modified to this effect by application of a suspension of rose-like V2O5 particles, for instance with an inkjet printer. Once again hydrophobicity is induced by interlaminar air pockets (separated by 2.1 nm distances). The UV effect is also explained. UV light creates electron-hole pairs, with the holes reacting with lattice oxygen, creating surface oxygen vacancies, while the electrons reduce V5+ to V3+. The oxygen vacancies are met by water, and it is this water absorbency by the vanadium surface that makes it hydrophilic. By extended storage in the dark, water is replaced by oxygen and hydrophilicity is once again lost.

A significant majority of hydrophobic surfaces have their hydrophobic properties imparted by structural or chemical modification of a surface of a bulk material, through either coatings or surface treatments. That is to say, the presence of molecular species (usually organic) or structural features results in high contact angles of water. In recent years, rare earth oxides have been shown to possess intrinsic hydrophobicity.[33] The intrinsic hydrophobicity of rare earth oxides depends on surface orientation and oxygen vacancy levels, and is naturally more robust than coatings or surface treatments, having potential applications in condensers and catalysts that can operate at high temperatures or corrosive environments. [34]

Hydrophobic concrete has been produced since the mid-20th century.

A simple routine of coating cotton fabric with silica[35] or titania[36] particles by sol-gel technique has been reported, which protects the fabric from UV light and makes it superhydrophobic.

An efficient routine has been reported for making polyethylene superhydrophobic and thus self-cleaning.[37] 99% of dirt on such a surface is easily washed away.