In organic chemistry, phosphate or orthophosphate is an organophosphate, an ester of orthophosphoric acid of the form PO4RR′R″ where one or more hydrogen atoms are replaced by organic groups. An example is trimethyl phosphate, (CH3)3PO4. The term also refers to the trivalent functional group OP(O-)3 in such esters.

Orthophosphates are especially important among the various phosphates because of their key roles in biochemistry, biogeochemistry, and ecology, and their economic importance for agriculture and industry.[2] The addition and removal of phosphate groups (phosphorylation and dephosphorylation) are key steps in cell metabolism.

Orthophosphates can condense to form pyrophosphates. 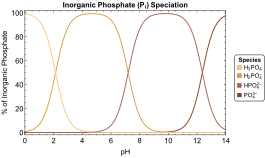 In water solution, orthophosphoric acid and its three derived anions coexist according to the dissociation and recombination equilibria below[3]

The pKa values are the pH values where the concentration of each species is equal to that of its conjugate bases. At pH 1 or lower, the phosphoric acid is practically undissociated. Around pH 4.7 (mid-way between the first two pKa values) the dihydrogen phosphate ion, [H2PO4]−, is practically the only species present. Around pH 9.8 (mid-way between the second and third pKa values) the monohydrogen phosphate ion, [HPO4]2−, is the only species present. At pH 13 or higher, the acid is completely dissociated as the phosphate ion, (PO4)3−.

This means that salts of the mono- and di-phosphate ions can be selectively crystallised from aqueous solution by setting the pH value to either 4.7 or 9.8.

In effect, H3PO4, H2(PO4)− and H(PO4)2− behave as separate weak acids because the successive pKa differ by more than 4.

Phosphate can form many polymeric ions such as pyrophosphate, (P2O7)4−, and triphosphate, (P3O10)5−. The various metaphosphate ions (which are usually long linear polymers) have an empirical formula of (PO3)− and are found in many compounds.

In biological systems, phosphorus can be found as free phosphate anions in solution (inorganic phosphate) or bound to organic molecules as various organophosphates.

Inorganic phosphate is generally denoted Pi and at physiological (homeostatic) pH primarily consists of a mixture of [HPO4]2− and [H2PO4]− ions. At a neutral pH, as in the cytosol (pH = 7.0), the concentrations of the orthophoshoric acid and its three anions have the ratios

Inorganic phosphate can be present also as of pyrophosphate anions [P2O7]4−, which can give orthophosphate by hydrolysis:

Organic phosphates are commonly found in the form of esters as nucleotides (e.g. AMP, ADP, and ATP) and in DNA and RNA. Free orthophosphate anions can be released by the hydrolysis of the phosphoanhydride bonds in ATP or ADP. These phosphorylation and dephosphorylation reactions are the immediate storage and source of energy for many metabolic processes. ATP and ADP are often referred to as high-energy phosphates, as are the phosphagens in muscle tissue. Similar reactions exist for the other nucleoside diphosphates and triphosphates.

An important occurrence of phosphates in biological systems is as the structural material of bone and teeth. These structures are made of crystalline calcium phosphate in the form of hydroxyapatite. The hard dense enamel of mammalian teeth may contain fluoroapatite, a hydroxy calcium phosphate where some of the hydroxyl groups have been replaced by fluoride ions.

Plants take up phosphorus through several pathways: the arbuscular mycorrhizal pathway and the direct uptake pathway.

Hyperphosphatemia, or a high blood level of phosphates, is associated with elevated mortality in the general population. Hyperphosphatemia is generally caused by phosphate food additives, as phosphates that are naturally present in food are not completely absorbed by the gastrointestinal tract. Phosphates induce vascular calcification, and a high concentration of phosphates in blood was found to be a predictor of cardiovascular events.[6]

Phosphates are commonly used as additives in industrially processed food and fast food. Fast food and ready-to-eat processed foods are the main contributors of the rising consumption of phosphate among the population. Phosphates additives are also commonly found in flavoured soft drinks as well as certain dairy products.[6]

Phosphate mine near Flaming Gorge, Utah, US, 2008

Phosphates are the naturally occurring form of the element phosphorus, found in many phosphate minerals. In mineralogy and geology, phosphate refers to a rock or ore containing phosphate ions. Inorganic phosphates are mined to obtain phosphorus for use in agriculture and industry.[2]

The largest global producer and exporter of phosphates is Morocco. Within North America, the largest deposits lie in the Bone Valley region of central Florida, the Soda Springs region of southeastern Idaho, and the coast of North Carolina. Smaller deposits are located in Montana, Tennessee , Georgia, and South Carolina. The small island nation of Nauru and its neighbor Banaba Island, which used to have massive phosphate deposits of the best quality, have been mined excessively. Rock phosphate can also be found in Egypt, Israel, Palestine, Western Sahara, Navassa Island, Tunisia, Togo, and Jordan, countries that have large phosphate-mining industries.

Phosphorite mines are primarily found in:

In 2007, at the current rate of consumption, the supply of phosphorus was estimated to run out in 345 years.[7] However, some scientists thought that a "peak phosphorus" would occur in 30 years and Dana Cordell from Institute for Sustainable Futures said that at "current rates, reserves will be depleted in the next 50 to 100 years".[8] Reserves refer to the amount assumed recoverable at current market prices. In 2012 the USGS estimated world reserves at 71 billion tons, while 0.19 billion tons were mined globally in 2011.[9] Phosphorus comprises 0.1% by mass of the average rock[10] (while, for perspective, its typical concentration in vegetation is 0.03% to 0.2%),[11] and consequently there are quadrillions of tons of phosphorus in Earth's 3×1019-ton crust,[12] albeit at predominantly lower concentration than the deposits counted as reserves, which are inventoried and cheaper to extract. If it is assumed that the phosphate minerals in phosphate rock are mainly hydroxyapatite and fluoroapatite, phosphate minerals contain roughly 18.5% phosphorus by weight. If phosphate rock contains around 20% of these minerals, the average phosphate rock has roughly 3.7% phosphorus by weight.

Some phosphate rock deposits, such as Mulberry in Florida,[13] are notable for their inclusion of significant quantities of radioactive uranium isotopes. This is a concern because radioactivity can be released into surface waters[14] from application of the resulting phosphate fertilizer.

In December 2012, Cominco Resources announced an updated JORC compliant resource of their Hinda project in Congo-Brazzaville of 531 million tons, making it the largest measured and indicated phosphate deposit in the world.[15]

The three principal phosphate producer countries (China, Morocco and the United States) account for about 70% of world production. 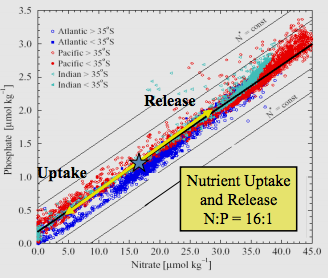 Relationship of phosphate to nitrate uptake for photosynthesis in various regions of the ocean. Note that nitrate is more often limiting than phosphate. See the Redfield ratio.

In ecological terms, because of its important role in biological systems, phosphate is a highly sought after resource. Once used, it is often a limiting nutrient in environments, and its availability may govern the rate of growth of organisms. This is generally true of freshwater environments, whereas nitrogen is more often the limiting nutrient in marine (seawater) environments. Addition of high levels of phosphate to environments and to micro-environments in which it is typically rare can have significant ecological consequences. For example, blooms in the populations of some organisms at the expense of others, and the collapse of populations deprived of resources such as oxygen (see eutrophication) can occur. In the context of pollution, phosphates are one component of total dissolved solids, a major indicator of water quality, but not all phosphorus is in a molecular form that algae can break down and consume.[17]