The two common approaches are based on liquid crystals and leuco dyes. Liquid crystals are used in precision applications, as their responses can be engineered to accurate temperatures, but their color range is limited by their principle of operation. Leuco dyes allow wider range of colors to be used, but their response temperatures are more difficult to set with accuracy.

Some liquid crystals are capable of displaying different colors at different temperatures. This change is dependent on selective reflection of certain wavelengths by the crystallic structure of the material, as it changes between the low-temperature crystallic phase, through anisotropic chiral or twisted nematic phase, to the high-temperature isotropic liquid phase. Only the nematic mesophase has thermochromic properties; this restricts the effective temperature range of the material.

The twisted nematic phase has the molecules oriented in layers with regularly changing orientation, which gives them periodic spacing. The light passing through the crystal undergoes Bragg diffraction on these layers, and the wavelength with the greatest constructive interference is reflected back, which is perceived as a spectral color. A change in the crystal temperature can result in a change of spacing between the layers and therefore in the reflected wavelength. The color of the thermochromic liquid crystal can therefore continuously range from non-reflective (black) through the spectral colors to black again, depending on the temperature. Typically, the high temperature state will reflect blue-violet, while the low-temperature state will reflect red-orange. Since blue is a shorter wavelength than red, this indicates that the distance of layer spacing is reduced by heating through the liquid-crystal state.

Liquid crystals used in dyes and inks often come microencapsulated, in the form of suspension.

Liquid crystals are difficult to work with and require specialized printing equipment. The material itself is also typically more expensive than alternative technologies. High temperatures, ultraviolet radiation, some chemicals and/or solvents have a negative impact on their lifespan. 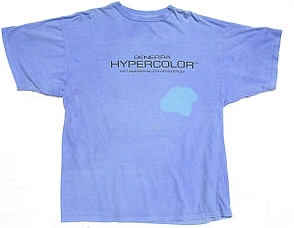 Example of a thermochromic T-shirt. A hairdryer was used to change the blue to turquoise.

Another example of a thermochromic T-shirt.

Thermochromic dyes are based on mixtures of leuco dyes with suitable other chemicals, displaying a color change (usually between the colorless leuco form and the colored form) in dependence on temperature. The dyes are rarely applied on materials directly; they are usually in the form of microcapsules with the mixture sealed inside. An illustrative example is the Hypercolor fashion, where microcapsules with crystal violet lactone, weak acid, and a dissociable salt dissolved in dodecanol are applied to the fabric; when the solvent is solid, the dye exists in its lactone leuco form, while when the solvent melts, the salt dissociates, the pH inside the microcapsule lowers, the dye becomes protonated, its lactone ring opens, and its absorption spectrum shifts drastically, therefore it becomes deeply violet. In this case the apparent thermochromism is in fact halochromism.

The dyes most commonly used are spirolactones, fluorans, spiropyrans, and fulgides. The acids include bisphenol A, parabens, 1,2,3-triazole derivates, and 4-hydroxycoumarin and act as proton donors, changing the dye molecule between its leuco form and its protonated colored form; stronger acids would make the change irreversible.

Leuco dyes have less accurate temperature response than liquid crystals. They are suitable for general indicators of approximate temperature ("too cool", "too hot", "about OK"), or for various novelty items. They are usually used in combination with some other pigment, producing a color change between the color of the base pigment and the color of the pigment combined with the color of the non-leuco form of the leuco dye. Organic leuco dyes are available for temperature ranges between about −5 °C (23 °F) and 60 °C (140 °F), in wide range of colors. The color change usually happens in a 3 °C (5.4 °F) interval.

Leuco dyes are used in applications where temperature response accuracy is not critical: e.g. novelties, bath toys, flying discs, and approximate temperature indicators for microwave-heated foods. Microencapsulation allows their use in wide range of materials and products. The size of the microcapsules typically ranges between 3–5 µm (over 10 times larger than regular pigment particles), which requires some adjustments to printing and manufacturing processes.

An application of leuco dyes is in the Duracell battery state indicators. A layer of a leuco dye is applied on a resistive strip to indicate its heating, thus gauging the amount of current the battery is able to supply. The strip is triangular-shaped, changing its resistance along its length, therefore heating up a proportionally long segment with the amount of current flowing through it. The length of the segment above the threshold temperature for the leuco dye then becomes colored.

Exposure to ultraviolet radiation, solvents and high temperatures reduce the lifespan of leuco dyes. Temperatures above about 200–230 °C (392–446 °F) typically cause irreversible damage to leuco dyes; a time-limited exposure of some types to about 250 °C (482 °F) is allowed during manufacturing.

Thermochromic paints use liquid crystals or leuco dye technology. After absorbing a certain amount of light or heat, the crystallic or molecular structure of the pigment reversibly changes in such a way that it absorbs and emits light at a different wavelength than at lower temperatures. Thermochromic paints are seen quite often as a coating on coffee mugs, whereby once hot coffee is poured into the mugs, the thermochromic paint absorbs the heat and becomes colored or transparent, therefore changing the appearance of the mug. These are known as magic mugs or heat changing mugs.

Thermochromic papers are used for thermal printers. One example is the paper impregnated with the solid mixture of a fluoran dye with octadecylphosphonic acid. This mixture is stable in solid phase; however, when the octadecylphosphonic acid is melted, the dye undergoes a chemical reaction in the liquid phase, and assumes the protonated colored form. This state is then conserved when the matrix solidifies again, if the cooling process is fast enough. As the leuco form is more stable in lower temperatures and solid phase, the records on thermochromic papers slowly fade out over years.

Thermochromic inks or dyes are temperature sensitive compounds, developed in the 1970s, that temporarily change color with exposure to heat. They come in two forms, liquid crystals and leuco dyes. Leuco dyes are easier to work with and allow for a greater range of applications. These applications include: flat thermometers, battery testers, clothing, and the indicator on bottles of maple syrup that change color when the syrup is warm. The thermometers are often used on the exterior of aquariums, or to obtain a body temperature via the forehead. Coors Light uses thermochromic ink on its cans now, changing from white to blue to indicate the can is cold.

Virtually all inorganic compounds are thermochromic to some extent. Most examples however involve only subtle changes in color. For example, titanium dioxide, zinc sulfide and zinc oxide are white at room temperature but when heated change to yellow. Similarly indium(III) oxide is yellow and darkens to yellow-brown when heated. Lead(II) oxide exhibits a similar color change on heating. The color change is linked to changes in the electronic properties (energy levels, populations) of these materials.

More dramatic examples of thermochromism are found in materials that undergo phase transition or exhibit charge-transfer bands near the visible region. Examples include

Other thermochromic solid semiconductor materials include

Some minerals are thermochromic as well; for example some chromium-rich pyropes, normally reddish-purplish, become green when heated to about 80 °C.[12]

Some materials change color irreversibly. These can be used for e.g. laser marking of materials.[13]