Scattering is a term used in physics to describe a wide range of physical processes where moving particles or radiation of some form, such as light or sound, are forced to deviate from a straight trajectory by localized non-uniformities (including particles and radiation) in the medium through which they pass. In conventional use, this also includes deviation of reflected radiation from the angle predicted by the law of reflection. Reflections of radiation that undergo scattering are often called diffuse reflections and unscattered reflections are called specular (mirror-like) reflections. Originally, the term was confined to light scattering (going back at least as far as Isaac Newton in the 17th century[1]). As more "ray"-like phenomena were discovered, the idea of scattering was extended to them, so that William Herschel could refer to the scattering of "heat rays" (not then recognized as electromagnetic in nature) in 1800.[2] John Tyndall, a pioneer in light scattering research, noted the connection between light scattering and acoustic scattering in the 1870s.[3] Near the end of the 19th century, the scattering of cathode rays (electron beams)[4] and X-rays[5] was observed and discussed. With the discovery of subatomic particles (e.g. Ernest Rutherford in 1911[6]) and the development of quantum theory in the 20th century, the sense of the term became broader as it was recognized that the same mathematical frameworks used in light scattering could be applied to many other phenomena.

The types of non-uniformities which can cause scattering, sometimes known as scatterers or scattering centers, are too numerous to list, but a small sample includes particles, bubbles, droplets, density fluctuations in fluids, crystallites in polycrystalline solids, defects in monocrystalline solids, surface roughness, cells in organisms, and textile fibers in clothing. The effects of such features on the path of almost any type of propagating wave or moving particle can be described in the framework of scattering theory.

Some areas where scattering and scattering theory are significant include radar sensing, medical ultrasound, semiconductor wafer inspection, polymerization process monitoring, acoustic tiling, free-space communications and computer-generated imagery.[8] Particle-particle scattering theory is important in areas such as particle physics, atomic, molecular, and optical physics, nuclear physics and astrophysics. In Particle Physics the quantum interaction and scattering of fundamental particles is described by the Scattering Matrix or S-Matrix, introduced and developed by John Archibald Wheeler and Werner Heisenberg.[9] 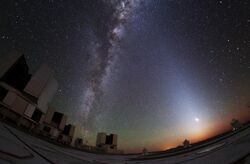 Zodiacal light is a faint, diffuse glow visible in the night sky. The phenomenon stems from the scattering of sunlight by interplanetary dust spread throughout the plane of the Solar System.[10]

Because the location of a single scattering center is not usually well known relative to the path of the radiation, the outcome, which tends to depend strongly on the exact incoming trajectory, appears random to an observer. This type of scattering would be exemplified by an electron being fired at an atomic nucleus. In this case, the atom's exact position relative to the path of the electron is unknown and would be unmeasurable, so the exact trajectory of the electron after the collision cannot be predicted. Single scattering is therefore often described by probability distributions.

Not all single scattering is random, however. A well-controlled laser beam can be exactly positioned to scatter off a microscopic particle with a deterministic outcome, for instance. Such situations are encountered in radar scattering as well, where the targets tend to be macroscopic objects such as people or aircraft.

Similarly, multiple scattering can sometimes have somewhat random outcomes, particularly with coherent radiation. The random fluctuations in the multiply scattered intensity of coherent radiation are called speckles. Speckle also occurs if multiple parts of a coherent wave scatter from different centers. In certain rare circumstances, multiple scattering may only involve a small number of interactions such that the randomness is not completely averaged out. These systems are considered to be some of the most difficult to model accurately.

The description of scattering and the distinction between single and multiple scattering are tightly related to wave–particle duality.

Scattering theory is a framework for studying and understanding the scattering of waves and particles. Prosaically, wave scattering corresponds to the collision and scattering of a wave with some material object, for instance (sunlight) scattered by rain drops to form a rainbow. Scattering also includes the interaction of billiard balls on a table, the Rutherford scattering (or angle change) of alpha particles by gold nuclei, the Bragg scattering (or diffraction) of electrons and X-rays by a cluster of atoms, and the inelastic scattering of a fission fragment as it traverses a thin foil. More precisely, scattering consists of the study of how solutions of partial differential equations, propagating freely "in the distant past", come together and interact with one another or with a boundary condition, and then propagate away "to the distant future". 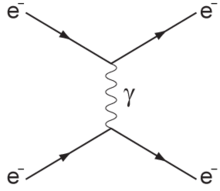 A Feynman diagram of scattering between two electrons by emission of a virtual photon.

Light scattering is one of the two major physical processes that contribute to the visible appearance of most objects, the other being absorption. Surfaces described as white owe their appearance to multiple scattering of light by internal or surface inhomogeneities in the object, for example by the boundaries of transparent microscopic crystals that make up a stone or by the microscopic fibers in a sheet of paper. More generally, the gloss (or lustre or sheen) of the surface is determined by scattering. Highly scattering surfaces are described as being dull or having a matte finish, while the absence of surface scattering leads to a glossy appearance, as with polished metal or stone.

Spectral absorption, the selective absorption of certain colors, determines the color of most objects with some modification by elastic scattering. The apparent blue color of veins in skin is a common example where both spectral absorption and scattering play important and complex roles in the coloration. Light scattering can also create color without absorption, often shades of blue, as with the sky (Rayleigh scattering), the human blue iris, and the feathers of some birds (Prum et al. 1998). However, resonant light scattering in nanoparticles can produce many different highly saturated and vibrant hues, especially when surface plasmon resonance is involved (Roqué et al. 2006).[15][16]

Models of light scattering can be divided into three domains based on a dimensionless size parameter, α which is defined as: [math]\displaystyle{ \alpha = \pi D_\text{p} / \lambda, }[/math] where πDp is the circumference of a particle and λ is the wavelength of incident radiation in the medium. Based on the value of α, these domains are:

Rayleigh scattering is a process in which electromagnetic radiation (including light) is scattered by a small spherical volume of variant refractive indexes, such as a particle, bubble, droplet, or even a density fluctuation. This effect was first modeled successfully by Lord Rayleigh, from whom it gets its name. In order for Rayleigh's model to apply, the sphere must be much smaller in diameter than the wavelength (λ) of the scattered wave; typically the upper limit is taken to be about 1/10 the wavelength. In this size regime, the exact shape of the scattering center is usually not very significant and can often be treated as a sphere of equivalent volume. The inherent scattering that radiation undergoes passing through a pure gas is due to microscopic density fluctuations as the gas molecules move around, which are normally small enough in scale for Rayleigh's model to apply. This scattering mechanism is the primary cause of the blue color of the Earth's sky on a clear day, as the shorter blue wavelengths of sunlight passing overhead are more strongly scattered than the longer red wavelengths according to Rayleigh's famous 1/λ4 relation. Along with absorption, such scattering is a major cause of the attenuation of radiation by the atmosphere.[17] The degree of scattering varies as a function of the ratio of the particle diameter to the wavelength of the radiation, along with many other factors including polarization, angle, and coherence.[18]

Both Mie and Rayleigh scattering are considered elastic scattering processes, in which the energy (and thus wavelength and frequency) of the light is not substantially changed. However, electromagnetic radiation scattered by moving scattering centers does undergo a Doppler shift, which can be detected and used to measure the velocity of the scattering center/s in forms of techniques such as lidar and radar. This shift involves a slight change in energy.

At values of the ratio of particle diameter to wavelength more than about 10, the laws of geometric optics are mostly sufficient to describe the interaction of light with the particle. Mie theory can still be used for these larger spheres, but the solution often becomes numerically unwieldy.

For modeling of scattering in cases where the Rayleigh and Mie models do not apply such as larger, irregularly shaped particles, there are many numerical methods that can be used. The most common are finite-element methods which solve Maxwell's equations to find the distribution of the scattered electromagnetic field. Sophisticated software packages exist which allow the user to specify the refractive index or indices of the scattering feature in space, creating a 2- or sometimes 3-dimensional model of the structure. For relatively large and complex structures, these models usually require substantial execution times on a computer.

Electrophoresis involves the migration of macromolecules under the influence of an electric field.[19] Electrophoretic light scattering involves passing an electric field through a liquid which makes particles move. The bigger the charge is on the particles, the faster they are able to move.[20]