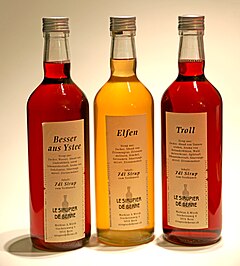 In cooking, a syrup or sirup (from Arabic: شراب; sharāb, beverage, wine and Latin: sirupus)[1] is a condiment that is a thick, viscous liquid consisting primarily of a solution of sugar in water, containing a large amount of dissolved sugars but showing little tendency to deposit crystals. Its consistency is similar to that of molasses. The viscosity arises from the multiple hydrogen bonds between the dissolved sugar, which has many hydroxyl (OH) groups.

Syrups can be made by dissolving sugar in water or by reducing naturally sweet juices such as cane juice, sorghum juice, maple sap or agave nectar. Corn syrup is made from corn starch using an enzymatic process that converts it to sugars.

There are a range of syrups used in food production, including:

A jug of bottler's flavor for 7-Up. The syrup-like concentrate lacks sugar and is sold to franchisees to refill.

A variety of beverages call for sweetening to offset the tartness of some juices used in the drink recipes. Granulated sugar does not dissolve easily in cold drinks or ethyl alcohol. Since the following syrups are liquids, they are easily mixed with other liquids in mixed drinks, making them superior alternatives to granulated sugar.

Simple syrup (aka sugar syrup, or bar syrup) is a basic sugar-and-water syrup used by bartenders as a sweetener to make cocktails. Simple syrup is made by stirring granulated sugar into hot water in a saucepan until the sugar is dissolved and then cooling the solution. The ratio of sugar to water is 1:1 by volume for normal simple syrup, but can get up to 2:1 for rich simple syrup.[6] For pure sucrose the saturation limit is about 5:1 (500 grams (18 oz) sucrose to 100 millilitres (3.5 imp fl oz; 3.4 US fl oz) water).

Combining demerara sugar, a type of natural brown sugar, with water in this process produces demerara syrup. Sugar substitutes such as honey or agave nectar can also be used to make syrups. Spices can be added to the ingredients during the process, resulting in a spiced simple syrup.

Flavored syrups are made by infusing simple syrups with flavouring agents during the cooking process. A wide variety of flavouring agents can be used, often in combination with each other, such as herbs, spices, or aromatics. For instance, syrupus aromaticus is prepared by adding certain quantities of orange flavouring and cinnamon water to simple syrup. This type of syrup is commonly used at coffee bars, especially in the United States , to make flavoured drinks. Infused simple syrups can be used to create desserts, or, to add sweetness and depth of flavour to cocktails.

Gomme syrup (or gum syrup; gomme is French for "gum") is an ingredient commonly used in mixed drinks. It is also commonly used as a sweetener for iced coffee in Japan. Like bar syrups, it is a sugar and water mixture, but has an added ingredient of gum arabic. Gomme syrup is made with the highest ratio of sugar to water possible, while the gum arabic prevents the sugar from crystallizing and adds a smooth texture.