In pharmacology, clearance is a pharmacokinetic measurement of the volume of plasma from which a substance is completely removed per unit time. Usually, clearance is measured in L/h or mL/min.[1] The quantity reflects the rate of drug elimination divided by plasma concentration. Excretion, on the other hand, is a measurement of the amount of a substance removed from the body per unit time (e.g., mg/min, μg/min, etc.). While clearance and excretion of a substance are related, they are not the same thing. The concept of clearance was described by Thomas Addis, a graduate of the University of Edinburgh Medical School. Substances in the body can be cleared by various organs, including the kidneys, liver, lungs, etc. Thus, total body clearance is equal to the sum clearance of the substance by each organ (e.g., renal clearance + hepatic clearance + lung clearance = total body clearance). For many drugs, however, clearance is solely a function of renal excretion. In these cases, clearance is almost synonymous with renal clearance or renal plasma clearance. Each substance has a specific clearance that depends on how the substance is handled by the nephron. Clearance is a function of 1) glomerular filtration, 2) secretion from the peritubular capillaries to the nephron, and 3) reabsorption from the nephron back to the peritubular capillaries. Clearance is variable in zero-order kinetics because a constant amount of the drug is eliminated per unit time, but it is constant in first-order kinetics, because the amount of drug eliminated per unit time changes with the concentration of drug in the blood.[2][3]

Clearance can refer to the volume of plasma from which the substance is removed (i.e., cleared) per unit time or, in some cases, inter-compartmental clearances can be discussed when referring to redistribution between body compartments such as plasma, muscle, and fat.[1] 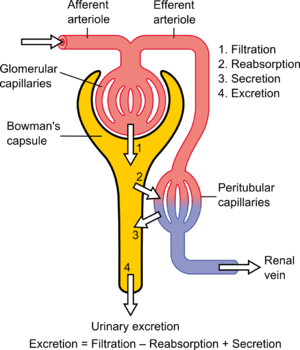 Diagram showing the basic physiologic mechanisms of the kidney

When referring to the function of the kidney, clearance is considered to be the amount of liquid filtered out of the blood that gets processed by the kidneys or the amount of blood cleaned per time because it has the units of a volumetric flow rate [ volume per unit time ]. However, it does not refer to a real value; "the kidney does not completely remove a substance from the total renal plasma flow."[4] From a mass transfer perspective[5] and physiologically, volumetric blood flow (to the dialysis machine and/or kidney) is only one of several factors that determine blood concentration and removal of a substance from the body. Other factors include the mass transfer coefficient, dialysate flow and dialysate recirculation flow for hemodialysis, and the glomerular filtration rate and the tubular reabsorption rate, for the kidney. A physiologic interpretation of clearance (at steady-state) is that clearance is a ratio of the mass generation and blood (or plasma) concentration.

Its definition follows from the differential equation that describes exponential decay and is used to model kidney function and hemodialysis machine function:

It is derived from a mass balance.

Clearance of a substance is sometimes expressed as the inverse of the time constant that describes its removal rate from the body divided by its volume of distribution (or total body water).

In steady-state, it is defined as the mass generation rate of a substance (which equals the mass removal rate) divided by its concentration in the blood.

For substances that exhibit substantial plasma protein binding, clearance is generally dependent on the total concentration (free + protein-bound) and not the free concentration.[7]

Equation 1 is derived from a mass balance:

In words, the above equation states:

Equation A1 can be rewritten as:

If one applies the limit [math]\displaystyle{ \Delta t \to 0 }[/math] one obtains a differential equation:

Using the Product Rule this can be rewritten as:

If one assumes that the volume change is not significant, i.e. [math]\displaystyle{ C \frac{dV}{dt}=0 }[/math], the result is Equation 1:

Solution to the differential equation

The general solution of the above differential equation (1) is:[8][9]

The solution to the above differential equation (9) at time infinity (steady state) is:

The above equation (10a) can be rewritten as:

Renal clearance can be measured with a timed collection of urine and an analysis of its composition with the aid of the following equation (which follows directly from the derivation of (10b)):

Note - the above equation (11) is valid only for the steady-state condition. If the substance being cleared is not at a constant plasma concentration (i.e. not at steady-state) K must be obtained from the (full) solution of the differential equation (9).