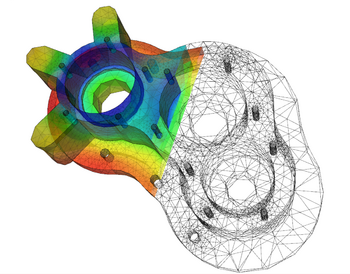 Visualization of heat transfer in a pump casing, created by solving the heat equation. Heat is being generated internally in the casing and being cooled at the boundary, providing a steady state temperature distribution.

Often when a closed-form expression for the solutions is not available, solutions may be approximated numerically using computers. The theory of dynamical systems puts emphasis on qualitative analysis of systems described by differential equations, while many numerical methods have been developed to determine solutions with a given degree of accuracy.

In all these cases, y is an unknown function of x (or of x1 and x2), and f is a given function.

He solves these examples and others using infinite series and discusses the non-uniqueness of solutions.

for which the following year Leibniz obtained solutions by simplifying it.[4]

The Euler–Lagrange equation was developed in the 1750s by Euler and Lagrange in connection with their studies of the tautochrone problem. This is the problem of determining a curve on which a weighted particle will fall to a fixed point in a fixed amount of time, independent of the starting point. Lagrange solved this problem in 1755 and sent the solution to Euler. Both further developed Lagrange's method and applied it to mechanics, which led to the formulation of Lagrangian mechanics.

In 1822, Fourier published his work on heat flow in Théorie analytique de la chaleur (The Analytic Theory of Heat),[10] in which he based his reasoning on Newton's law of cooling, namely, that the flow of heat between two adjacent molecules is proportional to the extremely small difference of their temperatures. Contained in this book was Fourier's proposal of his heat equation for conductive diffusion of heat. This partial differential equation is now taught to every student of mathematical physics.

In classical mechanics, the motion of a body is described by its position and velocity as the time value varies. Newton's laws allow these variables to be expressed dynamically (given the position, velocity, acceleration and various forces acting on the body) as a differential equation for the unknown position of the body as a function of time.

In some cases, this differential equation (called an equation of motion) may be solved explicitly.

An ordinary differential equation (ODE) is an equation containing an unknown function of one real or complex variable x, its derivatives, and some given functions of x. The unknown function is generally represented by a variable (often denoted y), which, therefore, depends on x. Thus x is often called the independent variable of the equation. The term "ordinary" is used in contrast with the term partial differential equation, which may be with respect to more than one independent variable.

Most ODEs that are encountered in physics are linear. Therefore, most special functions may be defined as solutions of linear differential equations (see Holonomic function).

Linear differential equations frequently appear as approximations to nonlinear equations. These approximations are only valid under restricted conditions. For example, the harmonic oscillator equation is an approximation to the nonlinear pendulum equation that is valid for small amplitude oscillations (see below).

In the next group of examples, the unknown function u depends on two variables x and t or x and y.

Solving differential equations is not like solving algebraic equations. Not only are their solutions often unclear, but whether solutions are unique or exist at all are also notable subjects of interest.