Short description: Relation between chemical reaction rate and concentrations of the reactants

In chemistry, the rate law or rate equation for a reaction is an equation that links the initial or forward reaction rate with the concentrations or pressures of the reactants and constant parameters (normally rate coefficients and partial reaction orders).[1] For many reactions, the initial rate is given by a power law such as

The rate equation of a reaction with an assumed multi-step mechanism can often be derived theoretically using quasi-steady state assumptions from the underlying elementary reactions, and compared with the experimental rate equation as a test of the assumed mechanism. The equation may involve a fractional order, and may depend on the concentration of an intermediate species.

A reaction can also have an undefined reaction order with respect to a reactant if the rate is not simply proportional to some power of the concentration of that reactant; for example, one cannot talk about reaction order in the rate equation for a bimolecular reaction between adsorbed molecules:

Consider a typical chemical reaction in which two reactants A and B combine to form a product C:

This can also be written

The prefactors −1, −2 and 3 (with negative signs for reactants because they are consumed) are known as stoichiometric coefficients. One molecule of A combines with two of B to form 3 of C, so if we use the symbol [X] for the number of moles of chemical X,[2]

If the reaction takes place in a closed system at constant temperature and volume, without a build-up of reaction intermediates, the reaction rate [math]\displaystyle{ v }[/math] is defined as

where νi is the stoichiometric coefficient for chemical Xi, with a negative sign for a reactant.[3]

The initial reaction rate [math]\displaystyle{ v_0 = v(t = 0) }[/math] has some functional dependence on the concentrations of the reactants,

and this dependence is known as the rate equation or rate law.[4] This law generally cannot be deduced from the chemical equation and must be determined by experiment.[5]

A common form for the rate equation is a power law:[5]

The constant [math]\displaystyle{ k }[/math] is called the rate constant. The exponents, which can be fractional,[5] are called partial orders of reaction and their sum is the overall order of reaction.[6]

In a dilute solution, an elementary reaction (one having a single step with a single transition state) is empirically found to obey the law of mass action. This predicts that the rate depends only on the concentrations of the reactants, raised to the powers of their stoichiometric coefficients.[7]

The natural logarithm of the power-law rate equation is

However, this method is not always reliable because

The tentative rate equation determined by the method of initial rates is therefore normally verified by comparing the concentrations measured over a longer time (several half-lives) with the integrated form of the rate equation; this assumes that the reaction goes to completion.

For example, the integrated rate law for a first-order reaction is

Many enzyme-catalyzed reactions are zero order, provided that the reactant concentration is much greater than the enzyme concentration which controls the rate, so that the enzyme is saturated. For example, the biological oxidation of ethanol to acetaldehyde by the enzyme liver alcohol dehydrogenase (LADH) is zero order in ethanol.[14]

Similarly reactions with heterogeneous catalysis can be zero order if the catalytic surface is saturated. For example, the decomposition of phosphine (PH
3) on a hot tungsten surface at high pressure is zero order in phosphine, which decomposes at a constant rate.[13]

Although not affecting the above math, the majority of first order reactions proceed via intermolecular collisions. Such collisions, which contribute the energy to the reactant, are necessarily second order. The rate of these collisions is, however, masked by the fact that the rate determining step remains the unimolecular breakdown of the energized reactant.

Examples of such reactions are:

In organic chemistry, the class of SN1 (nucleophilic substitution unimolecular) reactions consists of first-order reactions. For example, in the reaction of aryldiazonium ions with nucleophiles in aqueous solution, ArN+
2 + X−
→ ArX + N
2, the rate equation is [math]\displaystyle{ v_0 = k[\ce{ArN2+}], }[/math] where Ar indicates an aryl group.[19]

if the concentrations are equal, they satisfy the previous equation.

The second type includes nucleophilic addition-elimination reactions, such as the alkaline hydrolysis of ethyl acetate:[19]

This reaction is first-order in each reactant and second-order overall:

If the same hydrolysis reaction is catalyzed by imidazole, the rate equation becomes[19]

The rate is first-order in one reactant (ethyl acetate), and also first-order in imidazole, which as a catalyst does not appear in the overall chemical equation.

Another well-known class of second-order reactions are the SN2 (bimolecular nucleophilic substitution) reactions, such as the reaction of n-butyl bromide with sodium iodide in acetone:

This same compound can be made to undergo a bimolecular (E2) elimination reaction, another common type of second-order reaction, if the sodium iodide and acetone are replaced with sodium tert-butoxide as the salt and tert-butanol as the solvent:

One way to obtain a pseudo-first order reaction is to use a large excess of one reactant (say, [B]≫[A]) so that, as the reaction progresses, only a small fraction of the reactant in excess (B) is consumed, and its concentration can be considered to stay constant. For example, the hydrolysis of esters by dilute mineral acids follows pseudo-first order kinetics, where the concentration of water is constant because it is present in large excess:

Elementary reaction steps with order 3 (called ternary reactions) are rare and unlikely to occur. However, overall reactions composed of several elementary steps can, of course, be of any (including non-integer) order.

In fractional order reactions, the order is a non-integer, which often indicates a chemical chain reaction or other complex reaction mechanism. For example, the pyrolysis of acetaldehyde (CH
3CHO) into methane and carbon monoxide proceeds with an order of 1.5 with respect to acetaldehyde: [math]\displaystyle{ v_0 = k[\ce{CH3CHO}]^{3/2}. }[/math][23] The decomposition of phosgene (COCl
2) to carbon monoxide and chlorine has order 1 with respect to phosgene itself and order 0.5 with respect to chlorine: [math]\displaystyle{ v_0 = k \ce{[COCl2] [Cl2]}^{1/2}. }[/math][24]

The order of a chain reaction can be rationalized using the steady state approximation for the concentration of reactive intermediates such as free radicals. For the pyrolysis of acetaldehyde, the Rice-Herzfeld mechanism is

where • denotes a free radical.[23][25] To simplify the theory, the reactions of the *CHO to form a second *CH
3 are ignored.

In the steady state, the rates of formation and destruction of methyl radicals are equal, so that

so that the concentration of methyl radical satisfies

The reaction rate equals the rate of the propagation steps which form the main reaction products CH
4 and CO:

Another type of mixed-order rate law has a denominator of two or more terms, often because the identity of the rate-determining step depends on the values of the concentrations. An example is the oxidation of an alcohol to a ketone by hexacyanoferrate (III) ion [Fe(CN)63−] with ruthenate (VI) ion (RuO42−) as catalyst.[27] For this reaction, the rate of disappearance of hexacyanoferrate (III) is [math]\displaystyle{ v_0 = \frac{\ce{[Fe(CN)6]^2-}}{k_\alpha + k_\beta\ce{[Fe(CN)6]^2-}} }[/math]

Notable mechanisms with mixed-order rate laws with two-term denominators include:

A reaction rate can have a negative partial order with respect to a substance. For example, the conversion of ozone (O3) to oxygen follows the rate equation [math]\displaystyle{ v_0 =k\ce{[O_3]^2}\ce{[O_2]^{-1}} }[/math] in an excess of oxygen. This corresponds to second order in ozone and order (−1) with respect to oxygen.[28]

When a partial order is negative, the overall order is usually considered as undefined. In the above example, for instance, the reaction is not described as first order even though the sum of the partial orders is [math]\displaystyle{ 2 + (-1) = 1 }[/math], because the rate equation is more complex than that of a simple first-order reaction.

A pair of forward and reverse reactions may occur simultaneously with comparable speeds. For example, A and B react into products P and Q and vice versa (a, b, p, and q are the stoichiometric coefficients):

The reaction rate expression for the above reactions (assuming each one is elementary) can be written as:

The constants k1 and k−1 are related to the equilibrium coefficient for the reaction (K) by the following relationship (set v=0 in balance): 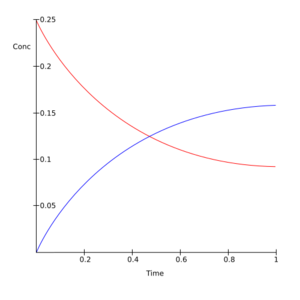 In a simple equilibrium between two species:

Then the equilibrium constant K is expressed as:

The term [math]\ce{ [P]0 }[/math] is not present because, in this simple example, the initial concentration of P is 0.

This applies even when time t is at infinity; i.e., equilibrium has been reached:

then it follows, by the definition of K, that

These equations allow us to uncouple the system of differential equations, and allow us to solve for the concentration of A alone.

The reaction equation was given previously as:

A plot of the negative natural logarithm of the concentration of A in time minus the concentration at equilibrium versus time t gives a straight line with slope k1 + k−1. By measurement of [A]e and [P]e the values of K and the two reaction rate constants will be known.[29]

If the concentration at the time t = 0 is different from above, the simplifications above are invalid, and a system of differential equations must be solved. However, this system can also be solved exactly to yield the following generalized expressions:

When the equilibrium constant is close to unity and the reaction rates very fast for instance in conformational analysis of molecules, other methods are required for the determination of rate constants for instance by complete lineshape analysis in NMR spectroscopy.

The steady state approximation leads to very similar results in an easier way. 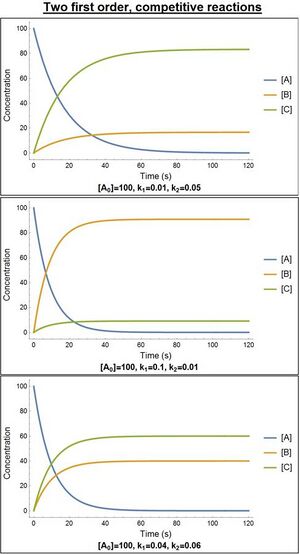 When a substance reacts simultaneously to give two different products, a parallel or competitive reaction is said to take place.

One first order and one second order reaction

The integrated equations were analytically obtained but during the process it was assumed that [math]\displaystyle{ \ce{[A]0} - \ce{[C]}\approx \ce{[A]0} }[/math]. Therefore, previous equation for [C] can only be used for low concentrations of [C] compared to [A]0

which is often written in the equivalent form

which denotes the flux of molecules per unit time and unit volume. Here [math]\ce{ [\vec{X}]=([X1], [X2], \ldots ,[X_\mathit{N}]) }[/math] is the vector of concentrations. This definition includes the elementary reactions:

Each of these is discussed in detail below. One can define the stoichiometric matrix

This is the product of the stoichiometric matrix and the vector of reaction rate functions. Particular simple solutions exist in equilibrium, [math]\displaystyle{ \frac{d [\ce X_i]}{dt}=0 }[/math], for systems composed of merely reversible reactions. In this case the rate of the forward and backward reactions are equal, a principle called detailed balance. Detailed balance is a property of the stoichiometric matrix [math]\displaystyle{ S_{ij} }[/math] alone and does not depend on the particular form of the rate functions [math]\displaystyle{ f_j }[/math]. All other cases where detailed balance is violated are commonly studied by flux balance analysis, which has been developed to understand metabolic pathways.[33][34]

Let [math]\displaystyle{ \operatorname{Diag} }[/math] be the function that takes a vector and constructs a diagonal matrix whose on-diagonal entries are those of the vector.

thus providing the relation between the initial conditions of the system and its state at time [math]\displaystyle{ t }[/math].