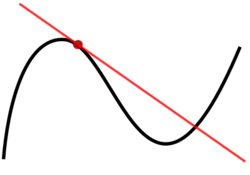 The graph of a function, drawn in black, and a tangent line to that graph, drawn in red. The slope of the tangent line is equal to the derivative of the function at the marked point.

In mathematics, the derivative of a function of a real variable measures the sensitivity to change of the function value (output value) with respect to a change in its argument (input value). Derivatives are a fundamental tool of calculus. For example, the derivative of the position of a moving object with respect to time is the object's velocity: this measures how quickly the position of the object changes when time advances.

The derivative of a function of a single variable at a chosen input value, when it exists, is the slope of the tangent line to the graph of the function at that point. The tangent line is the best linear approximation of the function near that input value. For this reason, the derivative is often described as the "instantaneous rate of change", the ratio of the instantaneous change in the dependent variable to that of the independent variable.

Derivatives can be generalized to functions of several real variables. In this generalization, the derivative is reinterpreted as a linear transformation whose graph is (after an appropriate translation) the best linear approximation to the graph of the original function. The Jacobian matrix is the matrix that represents this linear transformation with respect to the basis given by the choice of independent and dependent variables. It can be calculated in terms of the partial derivatives with respect to the independent variables. For a real-valued function of several variables, the Jacobian matrix reduces to the gradient vector.

A function of a real variable f(x) is differentiable at a point a of its domain, if its domain contains an open interval I containing a, and the limit

where the vertical bars denote the absolute value (see (ε, δ)-definition of limit). 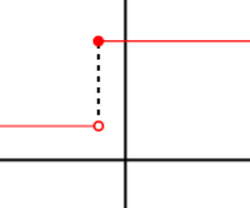 This function does not have a derivative at the marked point, as the function is not continuous there (specifically, it has a jump discontinuity). 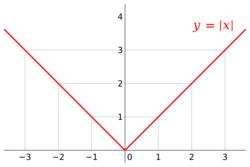 The absolute value function is continuous, but fails to be differentiable at x = 0 since the tangent slopes do not approach the same value from the left as they do from the right.

Most functions that occur in practice have derivatives at all points or at almost every point. Early in the history of calculus, many mathematicians assumed that a continuous function was differentiable at most points. Under mild conditions, for example if the function is a monotone function or a Lipschitz function, this is true. However, in 1872 Weierstrass found the first example of a function that is continuous everywhere but differentiable nowhere. This example is now known as the Weierstrass function. In 1931, Stefan Banach proved that the set of functions that have a derivative at some point is a meager set in the space of all continuous functions.[1] Informally, this means that hardly any random continuous functions have a derivative at even one point.

Derivative as a function

Sometimes f has a derivative at most, but not all, points of its domain. The function whose value at a equals f′(a) whenever f′(a) is defined and elsewhere is undefined is also called the derivative of f. It is still a function, but its domain may be smaller than the domain of f.

Using this idea, differentiation becomes a function of functions: The derivative is an operator whose domain is the set of all functions that have derivatives at every point of their domain and whose range is a set of functions. If we denote this operator by D, then D(f) is the function f′. Since D(f) is a function, it can be evaluated at a point a. By the definition of the derivative function, D(f)(a) = f′(a).

For comparison, consider the doubling function given by f(x) = 2x; f is a real-valued function of a real number, meaning that it takes numbers as inputs and has numbers as outputs:

The operator D, however, is not defined on individual numbers. It is only defined on functions:

On the real line, every polynomial function is infinitely differentiable. By standard differentiation rules, if a polynomial of degree n is differentiated n times, then it becomes a constant function. All of its subsequent derivatives are identically zero. In particular, they exist, so polynomials are smooth functions.

The derivatives of a function f at a point x provide polynomial approximations to that function near x. For example, if f is twice differentiable, then

in the sense that

If f is infinitely differentiable, then this is the beginning of the Taylor series for f evaluated at x + h around x.

and was once thought of as an infinitesimal quotient. Higher derivatives are expressed using the notation

for the nth derivative of [math]\displaystyle{ y = f(x) }[/math]. These are abbreviations for multiple applications of the derivative operator. For example,

Leibniz's notation allows one to specify the variable for differentiation (in the denominator), which is relevant in partial differentiation. It also can be used to write the chain rule as[Note 2]

Sometimes referred to as prime notation,[4] one of the most common modern notations for differentiation is due to Joseph-Louis Lagrange and uses the prime mark, so that the derivative of a function [math]\displaystyle{ f }[/math] is denoted [math]\displaystyle{ f' }[/math]. Similarly, the second and third derivatives are denoted

To denote the number of derivatives beyond this point, some authors use Roman numerals in superscript, whereas others place the number in parentheses:

Newton's notation for differentiation, also called the dot notation, places a dot over the function name to represent a time derivative. If [math]\displaystyle{ y = f(t) }[/math], then

denote, respectively, the first and second derivatives of [math]\displaystyle{ y }[/math]. This notation is used exclusively for derivatives with respect to time or arc length. It is typically used in differential equations in physics and differential geometry.[5][6] The dot notation, however, becomes unmanageable for high-order derivatives (order 4 or more) and cannot deal with multiple independent variables.

although this subscript is often omitted when the variable x is understood, for instance when this is the only independent variable present in the expression.

Here are the rules for the derivatives of the most common basic functions, where a is a real number.

Here are some of the most basic rules for deducing the derivative of a compound function from derivatives of basic functions.

The derivative of the function given by

Here the second term was computed using the chain rule and third using the product rule. The known derivatives of the elementary functions x2, x4, sin(x), ln(x) and exp(x) = ex, as well as the constant 7, were also used.

Relative to a hyperreal extension R ⊂ ⁎R of the real numbers, the derivative of a real function y = f(x) at a real point x can be defined as the shadow of the quotient ∆y/∆x for infinitesimal ∆x, where ∆y = f(x + ∆x) − f(x). Here the natural extension of f to the hyperreals is still denoted f. Here the derivative is said to exist if the shadow is independent of the infinitesimal chosen.

if the limit exists. The subtraction in the numerator is the subtraction of vectors, not scalars. If the derivative of y exists for every value of t, then y′ is another vector-valued function.

If e1, ..., en is the standard basis for Rn, then y(t) can also be written as y1(t)e1 + ⋯ + yn(t)en. If we assume that the derivative of a vector-valued function retains the linearity property, then the derivative of y(t) must be

because each of the basis vectors is a constant.

Suppose that f is a function that depends on more than one variable—for instance,

f can be reinterpreted as a family of functions of one variable indexed by the other variables:

In other words, every value of x chooses a function, denoted fx, which is a function of one real number.[Note 3] That is,

In this expression, a is a constant, not a variable, so fa is a function of only one real variable. Consequently, the definition of the derivative for a function of one variable applies:

The above procedure can be performed for any choice of a. Assembling the derivatives together into a function gives a function that describes the variation of f in the y direction:

In the above difference quotient, all the variables except xi are held fixed. That choice of fixed values determines a function of one variable

This is fundamental for the study of the functions of several real variables. Let f(x1, ..., xn) be such a real-valued function. If all partial derivatives ∂f / ∂xj of f are defined at the point a = (a1, ..., an), these partial derivatives define the vector

which is called the gradient of f at a. If f is differentiable at every point in some domain, then the gradient is a vector-valued function ∇f that maps the point (a1, ..., an) to the vector ∇f(a1, ..., an). Consequently, the gradient determines a vector field.

This is λ times the difference quotient for the directional derivative of f with respect to u. Furthermore, taking the limit as h tends to zero is the same as taking the limit as k tends to zero because h and k are multiples of each other. Therefore, Dv(f) = λDu(f). Because of this rescaling property, directional derivatives are frequently considered only for unit vectors.

This is a consequence of the definition of the total derivative. It follows that the directional derivative is linear in v, meaning that Dv + w(f) = Dv(f) + Dw(f).

The same definition also works when f is a function with values in Rm. The above definition is applied to each component of the vectors. In this case, the directional derivative is a vector in Rm.

Just like the single-variable derivative, f ′(a) is chosen so that the error in this approximation is as small as possible.

If n and m are both one, then the derivative f ′(a) is a number and the expression f ′(a)v is the product of two numbers. But in higher dimensions, it is impossible for f ′(a) to be a number. If it were a number, then f ′(a)v would be a vector in Rn while the other terms would be vectors in Rm, and therefore the formula would not make sense. For the linear approximation formula to make sense, f ′(a) must be a function that sends vectors in Rn to vectors in Rm, and f ′(a)v must denote this function evaluated at v.

To determine what kind of function it is, notice that the linear approximation formula can be rewritten as

This is equivalent to

The definition of the total derivative of f at a, therefore, is that it is the unique linear transformation f ′(a) : Rn → Rm such that

Up to changing variables, this is the statement that the function [math]\displaystyle{ x \mapsto f(a) + f'(a)(x-a) }[/math] is the best linear approximation to f at a.

which takes a point x in Rn and assigns to it an element of the space of k-linear maps from Rn to Rm – the "best" (in a certain precise sense) k-linear approximation to f at that point. By precomposing it with the diagonal map Δ, x → (x, x), a generalized Taylor series may be begun as

Main page: Generalizations of the derivative

The concept of a derivative can be extended to many other settings. The common thread is that the derivative of a function at a point serves as a linear approximation of the function at that point.

Calculus, known in its early history as infinitesimal calculus, is a mathematical discipline focused on limits, functions, derivatives, integrals, and infinite series. Isaac Newton and Gottfried Leibniz independently discovered calculus in the mid-17th century. However, each inventor claimed the other stole his work in a bitter dispute that continued until the end of their lives.