Short description: Environment in which a piece of software is executed

A computing platform or digital platform[1] is an environment in which a piece of software is executed. It may be the hardware or the operating system (OS), even a web browser and associated application programming interfaces, or other underlying software, as long as the program code is executed with it. Computing platforms have different abstraction levels, including a computer architecture, an OS, or runtime libraries.[2] A computing platform is the stage on which computer programs can run.

A platform can be seen both as a constraint on the software development process, in that different platforms provide different functionality and restrictions; and as an assistant to the development process, in that they provide low-level functionality ready-made. For example, an OS may be a platform that abstracts the underlying differences in hardware and provides a generic command for saving files or accessing the network.

Platforms may also include:

Some architectures have multiple layers, with each layer acting as a platform to the one above it. In general, a component only has to be adapted to the layer immediately beneath it. For instance, a Java program has to be written to use the Java virtual machine (JVM) and associated libraries as a platform but does not have to be adapted to run for the Windows, Linux or Macintosh OS platforms. However, the JVM, the layer beneath the application, does have to be built separately for each OS.[8] 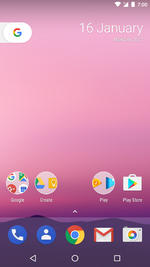