Limestone is a carbonate sedimentary rock that is often composed of the skeletal fragments of marine organisms such as coral, foraminifera, and molluscs. Its major materials are the minerals calcite and aragonite, which are different crystal forms of calcium carbonate (CaCO3). A closely related rock is dolomite, which contains a high percentage of the mineral dolomite, CaMg(CO3)2. In old USGS publications, dolomite was referred to as magnesian limestone, a term now reserved for magnesium-deficient dolomites or magnesium-rich limestones. 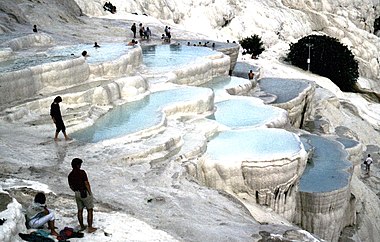 About 10% of sedimentary rocks are limestones. The solubility of limestone in water and weak acid solutions leads to karst landscapes, in which water erodes the limestone over thousands to millions of years. Most cave systems are through limestone bedrock.

Limestone has numerous uses: as a building material, an essential component of concrete (Portland cement), as aggregate for the base of roads, as white pigment or filler in products such as toothpaste or paints, as a chemical feedstock for the production of lime, as a soil conditioner, and as a popular decorative addition to rock gardens. 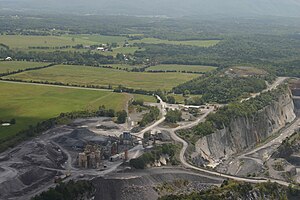 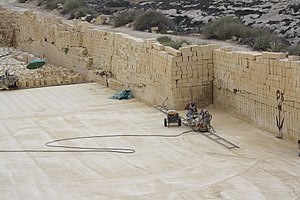 Cutting limestone blocks at a quarry in Gozo, Malta 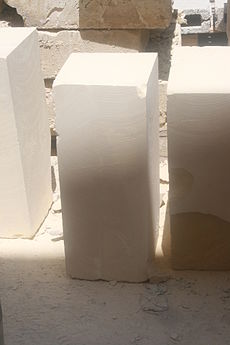 Like most other sedimentary rocks, most limestone is composed of grains. Most grains in limestone are skeletal fragments of marine organisms such as coral or foraminifera. These organisms secrete shells made of aragonite or calcite, and leave these shells behind when they die. Other carbonate grains composing limestones are ooids, peloids, intraclasts, and extraclasts.

Limestone often contains variable amounts of silica in the form of chert (chalcedony, flint, jasper, etc.) or siliceous skeletal fragment (sponge spicules, diatoms, radiolarians), and travertine (a precipitate of calcite and aragonite). Secondary calcite may be deposited by supersaturated meteoric waters (groundwater that precipitates the material in caves). This produces speleothems, such as stalagmites and stalactites. Another form taken by calcite is oolitic limestone, which can be recognized by its granular (oolite) appearance.

The primary source of the calcite in limestone is most commonly marine organisms. Some of these organisms can construct mounds of rock known as reefs, building upon past generations. Below about 3,000 meters, water pressure and temperature conditions cause the dissolution of calcite to increase nonlinearly, so limestone typically does not form in deeper waters (see lysocline). Limestones may also form in lacustrine[1] and evaporite depositional environments.[2][3]

Calcite can be dissolved or precipitated by groundwater, depending on several factors, including the water temperature, pH, and dissolved ion concentrations. Calcite exhibits an unusual characteristic called retrograde solubility, in which it becomes less soluble in water as the temperature increases.

Impurities (such as clay, sand, organic remains, iron oxide, and other materials) will cause limestones to exhibit different colors, especially with weathered surfaces.

Limestone may be crystalline, clastic, granular, or massive, depending on the method of formation. Crystals of calcite, quartz, dolomite or barite may line small cavities in the rock. When conditions are right for precipitation, calcite forms mineral coatings that cement the existing rock grains together, or it can fill fractures.

Travertine is a banded, compact variety of limestone formed along streams, particularly where there are waterfalls and around hot or cold springs. Calcium carbonate is deposited where evaporation of the water leaves a solution supersaturated with the chemical constituents of calcite. Tufa, a porous or cellular variety of travertine, is found near waterfalls. Coquina is a poorly consolidated limestone composed of pieces of coral or shells.

During regional metamorphism that occurs during the mountain building process (orogeny), limestone recrystallizes into marble.

Limestone is a parent material of Mollisol soil group.

Two major classification schemes, the Folk and the Dunham, are used for identifying the types of carbonate rocks collectively known as limestone. 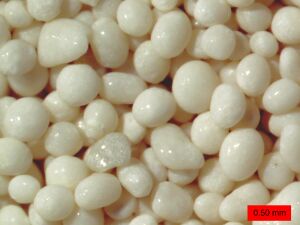 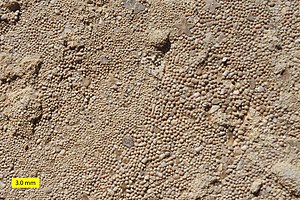 Ooids in limestone of the Carmel Formation (Middle Jurassic) of southwestern Utah.

Robert L. Folk developed a classification system that places primary emphasis on the detailed composition of grains and interstitial material in carbonate rocks.[4] Based on composition, there are three main components: allochems (grains), matrix (mostly micrite), and cement (sparite). The Folk system uses two-part names; the first refers to the grains and the second is the root. It is helpful to have a petrographic microscope when using the Folk scheme, because it is easier to determine the components present in each sample.[5]

The Dunham scheme focuses on depositional textures. Each name is based upon the texture of the grains that make up the limestone. Robert J. Dunham published his system for limestone in 1962; it focuses on the depositional fabric of carbonate rocks. Dunham divides the rocks into four main groups based on relative proportions of coarser clastic particles. Dunham names are essentially for rock families. His work considers whether or not the grains were originally in mutual contact, and therefore self-supporting, or whether the rock is characterized by the presence of frame builders and algal mats. Unlike the Folk scheme, Dunham deals with the original porosity of the rock. The Dunham scheme is more useful for hand samples because it is based on texture, not the grains in the sample.[6]

A revised classification was proposed by Wright (1992).[7] It adds some diagenetic patterns and can be summarized as follows: 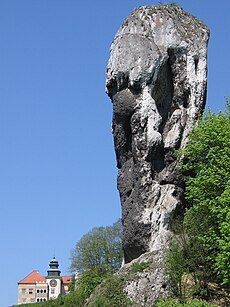 The Cudgel of Hercules, a tall limestone rock in Poland (Pieskowa Skała Castle in the background) 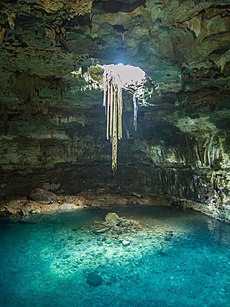 Reflecting lake in the Luray Caverns of the northern Shenandoah Valley 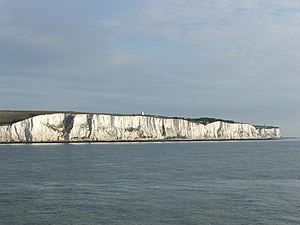 The White Cliffs of Dover

Limestone is partially soluble, especially in acid, and therefore forms many erosional landforms. These include limestone pavements, pot holes, cenotes, caves and gorges. Such erosion landscapes are known as karsts. Limestone is less resistant than most igneous rocks, but more resistant than most other sedimentary rocks. It is therefore usually associated with hills and downland, and occurs in regions with other sedimentary rocks, typically clays.

Karst topography and caves develop in limestone rocks due to their solubility in dilute acidic groundwater. The solubility of limestone in water and weak acid solutions leads to karst landscapes. Regions overlying limestone bedrock tend to have fewer visible above-ground sources (ponds and streams), as surface water easily drains downward through joints in the limestone. While draining, water and organic acid from the soil slowly (over thousands or millions of years) enlarges these cracks, dissolving the calcium carbonate and carrying it away in solution. Most cave systems are through limestone bedrock. Cooling groundwater or mixing of different groundwaters will also create conditions suitable for cave formation.

Coastal limestones are often eroded by organisms which bore into the rock by various means. This process is known as bioerosion. It is most common in the tropics, and it is known throughout the fossil record (see Taylor and Wilson, 2003).

Bands of limestone emerge from the Earth's surface in often spectacular rocky outcrops and islands. Examples include the Rock of Gibraltar, the Burren in County Clare, Ireland; the Verdon Gorge in France; Malham Cove in North Yorkshire and the Isle of Wight,[10] England; the Great Orme in Wales; on Fårö near the Swedish island of Gotland, the Niagara Escarpment in Canada/United States, Notch Peak in Utah, the Ha Long Bay National Park in Vietnam and the hills around the Lijiang River and Guilin city in China.

The Florida Keys, islands off the south coast of Florida, are composed mainly of oolitic limestone (the Lower Keys) and the carbonate skeletons of coral reefs (the Upper Keys), which thrived in the area during interglacial periods when sea level was higher than at present.

Unique habitats are found on alvars, extremely level expanses of limestone with thin soil mantles. The largest such expanse in Europe is the Stora Alvaret on the island of Öland, Sweden. Another area with large quantities of limestone is the island of Gotland, Sweden. Huge quarries in northwestern Europe, such as those of Mount Saint Peter (Belgium/Netherlands), extend for more than a hundred kilometers.

The world's largest limestone quarry is at Michigan Limestone and Chemical Company in Rogers City, Michigan.[11] 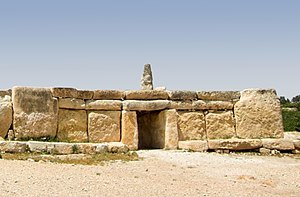 The Megalithic Temples of Malta such as Ħaġar Qim are built entirely of limestone. They are among the oldest freestanding structures in existence.[12]

Limestone is very common in architecture, especially in Europe and North America. Many landmarks across the world, including the Great Pyramid and its associated complex in Giza, Egypt, were made of limestone. So many buildings in Kingston, Ontario, Canada were, and continue to be, constructed from it that it is nicknamed the 'Limestone City'.[13] On the island of Malta, a variety of limestone called Globigerina limestone was, for a long time, the only building material available, and is still very frequently used on all types of buildings and sculptures. Limestone is readily available and relatively easy to cut into blocks or more elaborate carving.[12] Ancient American sculptors valued limestone because it was easy to work and good for fine detail. Going back to the Late Preclassic period (by 200–100 BCE), the Maya civilization (Ancient Mexico) created refined sculpture using limestone because of these excellent carving properties. The Maya would decorate the ceilings of their sacred buildings (known as lintels) and cover the walls with carved limestone panels. Carved on these sculptures were political and social stories, and this helped communicate messages of the king to his people.[14] Limestone is long-lasting and stands up well to exposure, which explains why many limestone ruins survive. However, it is very heavy, making it impractical for tall buildings, and relatively expensive as a building material. 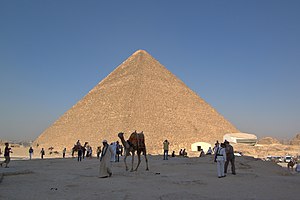 The Great Pyramid of Giza, one of the Seven Wonders of the Ancient World had an outside cover made entirely from limestone. 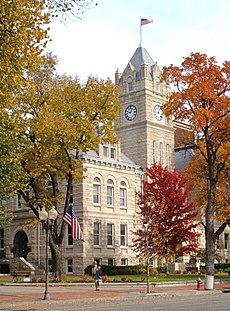 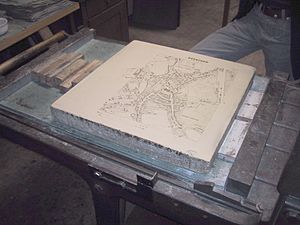 A limestone plate with a negative map of Moosburg in Bavaria is prepared for a lithography print.

Limestone was most popular in the late 19th and early 20th centuries. Train stations, banks and other structures from that era were normally made of limestone. It is used as a facade on some skyscrapers, but only in thin plates for covering, rather than solid blocks. In the United States, Indiana, most notably the Bloomington area, has long been a source of high-quality quarried limestone, called Indiana limestone. Many famous buildings in London are built from Portland limestone. Houses built in Odessa in Ukraine in the 19th century were mostly constructed from limestone and the extensive remains of the mines now form the Odessa Catacombs.[15]

Limestone was also a very popular building block in the Middle Ages in the areas where it occurred, since it is hard, durable, and commonly occurs in easily accessible surface exposures. Many medieval churches and castles in Europe are made of limestone. Beer stone was a popular kind of limestone for medieval buildings in southern England.

Limestone and (to a lesser extent) marble are reactive to acid solutions, making acid rain a significant problem to the preservation of artifacts made from this stone. Many limestone statues and building surfaces have suffered severe damage due to acid rain. Likewise limestone gravel has been used to protect lakes vulnerable to acid rain, acting as a pH buffering agent. Acid-based cleaning chemicals can also etch limestone, which should only be cleaned with a neutral or mild alkali-based cleaner.

People can be exposed to limestone in the workplace by inhalation of and eye contact with the dust.

Removing graffiti from weathered limestone is difficult because it is a porous and permeable material. The surface is fragile so usual abrasion methods run the risk of "severe surface loss". Because it is an acid-sensitive stone some cleaning agents cannot be used due to adverse effects.[20]

The cyanobacterium Hyella balani can bore through limestone; as can the green alga Eugamantia sacculata and the fungus Ostracolaba implexa.[21]