For secondary deposits, derived from concrete, lime, or mortar, outside the cave environment, see Calthemite. 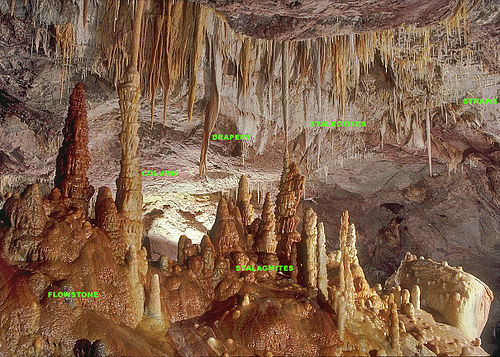 Cave labeled with the six most common types of speleothems.

Speleothems,( /ˈspiːliːəθɛm/; Ancient Greek, spēlaion "cave" + théma "deposit") are mineral deposits that accumulate over time in natural caves.[1] Speleothems most commonly form in calcareous caves due to carbonate dissolution reactions. They can take a variety of forms, depending on their depositional history and environment. Their chemical composition, gradual growth, and preservation in caves make them useful paleoclimate proxies.

More than 300 variations of cave mineral deposits have been identified.[2] The vast majority of speleothems are calcareous, composed of calcium carbonate (CaCO3) minerals (calcite or aragonite). Less commonly, speleothems are made of calcium sulfate (gypsum or mirabilite) or opal.[2] Speleothems of pure calcium carbonate or calcium sulfate are translucent and colorless. The presence of iron oxide or copper provides a reddish brown color. The presence of manganese oxide can create darker colors such as black or dark brown. Speleothems can also be brown due to the presence of mud and silt.[2]

As the acidic water travels through the calcium carbonate bedrock from the surface to the cave ceiling, it dissolves the bedrock via the reaction:

When the solution reaches a cave, the lower pCO2 in the cave drives the precipitation of CaCO3 via the reaction:

Over time, the accumulation of these precipitates form dripstones (stalagmites, stalactites) and flowstones, two of the major types of speleothems.

Speleothem transects can provide paleoclimate records similar to those from ice cores or tree rings.[4] Slow geometrical growth and incorporation of radioactive elements enables speleothems to be accurately and precisely dated over much of the late Quaternary by radiocarbon dating and uranium-thorium dating, as long as the cave is a closed system and the speleothem has not undergone recrystallization.[5] Oxygen (δ18O) and carbon (δ13C) stable isotopes are used to track variation in rainfall temperature, precipitation, and vegetation changes over the past ~500,000 years.[6][7] Variations in precipitation alter the width of speleothem rings: closed rings indicates little rainfall, wider spacing indicates heavier rainfall, and denser rings indicate higher moisture. Drip rate counting and trace element analysis of the water drops record short-term climate variations, such as El Niño–Southern Oscillation (ENSO) climate events.[8] 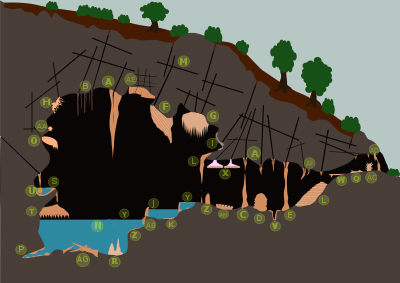 Speleothems take various forms, depending on whether the water drips, seeps, condenses, flows, or ponds. Many speleothems are named for their resemblance to man-made or natural objects. Types of speleothems include:[9]

The usual definition of speleothem excludes secondary mineral deposits derived from concrete, lime, mortar, or other calcareous material (e.g. limestone and dolomite) outside the cave environment or in artificial caves (e.g. mines, tunnels), which can have similar shapes and forms as speleothems. Such secondary deposits in man-made structures are termed calthemites. Calthemites are often associated with concrete degradation, or due to leaching of lime, mortar or other calcareous material.