Attendees at the 2004 JavaOne conference described their vision of the future of Java on a whiteboard.

JavaOne is an annual conference first organized in 1996 by Sun Microsystems to discuss Java technologies, primarily among Java developers. It was held in San Francisco, California , typically running from a Monday to Thursday in summer months (early on) or in early fall months (later). Technical sessions and Birds of a Feather (BOF) sessions on a variety of Java-related topics were held throughout the week.

For many years, the conference was hosted by Sun executive and Java evangelist John Gage.[1]

In 1999, the conference played host to an event called the Hackathon, a challenge set by Gage. Attendees were to write a program in Java for the new Palm V using the infrared port to communicate with other Palm users and register the device on the Internet.

During the 2008 conference, seventy Moscone Center staff members and three attendees were sickened by an outbreak of norovirus.[2]

After the acquisition of Sun by Oracle Corporation in 2010, the conference was held concurrently with Oracle OpenWorld. The conference was moved from Moscone Center to hotels on nearby Mason Street. In some years, one block of Mason was closed and covered with a tent, which formed part of the conference venue.

In April 2018, Oracle announced that the JavaOne conference would be discontinued, in favor of a more general programming conference called Oracle Code One.[3] The CodeOne conference ran for two years.

In March 2022, Oracle announced that JavaOne will return in October 2022,[4] reclaiming the position the now defunct CodeOne conference once occupied. The conference has moved to Las Vegas from its original location in San Francisco. 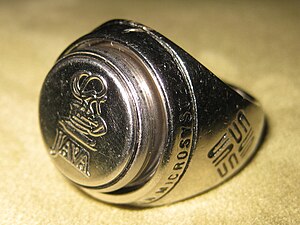 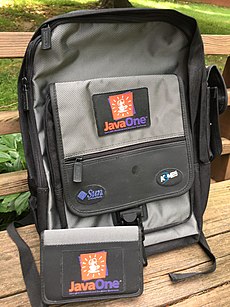 JavaOne-branded backpack and case, given out at JavaOne 2001

Several of the conferences highlighted a hardware device, typically made available to attendees before it is sold to the general public, or at a steep discount:

From 2007 to 2009, an associated one-day event, CommunityOne, was held, for the broader free and open-source developer community.

CommunityOne was discontinued after the acquisition of Sun by Oracle.