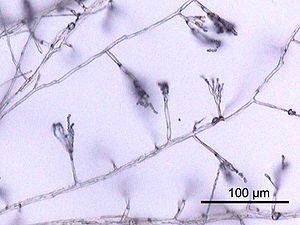 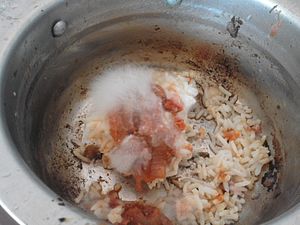 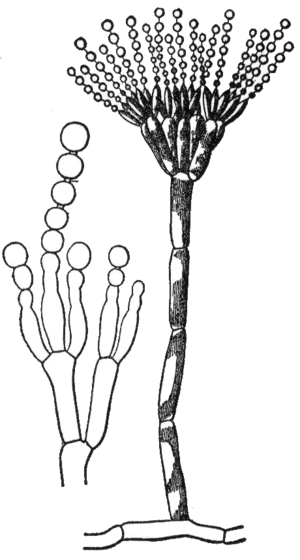 A hypha (from grc ὑφή (Script error: No such module "Ancient Greek".) 'web'; Template:Plural form) is a long, branching, filamentous structure of a fungus, oomycete, or actinobacterium.[1] In most fungi, hyphae are the main mode of vegetative growth, and are collectively called a mycelium.

A hypha consists of one or more cells surrounded by a tubular cell wall. In most fungi, hyphae are divided into cells by internal cross-walls called "septa" (singular septum). Septa are usually perforated by pores large enough for ribosomes, mitochondria, and sometimes nuclei to flow between cells. The major structural polymer in fungal cell walls is typically chitin, in contrast to plants and oomycetes that have cellulosic cell walls. Some fungi have aseptate hyphae, meaning their hyphae are not partitioned by septa.

Hyphae grow at their tips. During tip growth, cell walls are extended by the external assembly and polymerization of cell wall components, and the internal production of new cell membrane.[3] The Spitzenkörper is an intracellular organelle associated with tip growth. It is composed of an aggregation of membrane-bound vesicles containing cell wall components. The Spitzenkörper is part of the endomembrane system of fungi, holding and releasing vesicles it receives from the Golgi apparatus. These vesicles travel to the cell membrane via the cytoskeleton and release their contents (including various cysteine-rich proteins including cerato-platanins and hydrophobins)[4][5] outside the cell by the process of exocytosis, where it can then be transported to where it is needed. Vesicle membranes contribute to growth of the cell membrane while their contents form new cell wall. The Spitzenkörper moves along the apex of the hyphal strand and generates apical growth and branching; the apical growth rate of the hyphal strand parallels and is regulated by the movement of the Spitzenkörper.[6]

As a hypha extends, septa may be formed behind the growing tip to partition each hypha into individual cells. Hyphae can branch through the bifurcation of a growing tip, or by the emergence of a new tip from an established hypha.

The direction of hyphal growth can be controlled by environmental stimuli, such as the application of an electric field. Hyphae can also sense reproductive units from some distance, and grow towards them. Hyphae can weave through a permeable surface to penetrate it.[3]

Hyphae may be modified in many different ways to serve specific functions. Some parasitic fungi form haustoria that function in absorption within the host cells. The arbuscules of mutualistic mycorrhizal fungi serve a similar function in nutrient exchange, so are important in assisting nutrient and water absorption by plants. Ectomycorrhizal extramatrical mycelium greatly increases the soil area available for exploitation by plant hosts by funneling water and nutrients to ectomycorrhizas, complex fungal organs on the tips of plant roots. Hyphae are found enveloping the gonidia in lichens, making up a large part of their structure. In nematode-trapping fungi, hyphae may be modified into trapping structures such as constricting rings and adhesive nets. Mycelial cords can be formed to transfer nutrients over larger distances. Bulk fungal tissues, cords, and membranes, such as those of mushrooms and lichens, are mainly composed of felted and often anastomosed hyphae.[7]

Classification based on cell division

Classification based on cell wall and overall form

Characteristics of hyphae can be important in fungal classification. In basidiomycete taxonomy, hyphae that comprise the fruiting body can be identified as generative, skeletal, or binding hyphae.[12]

Based on the generative, skeletal and binding hyphal types, in 1932 E. J. H. Corner applied the terms monomitic, dimitic, and trimitic to hyphal systems, in order to improve the classification of polypores.[13][14]

Fungi that form fusiform skeletal hyphae bound by generative hyphae are said to have sarcodimitic hyphal systems. A few fungi form fusiform skeletal hyphae, generative hyphae, and binding hyphae, and these are said to have sarcotrimitic hyphal systems. These terms were introduced as a later refinement by E. J. H. Corner in 1966.[15]

Classification based on refractive appearance

Hyphae are described as "gloeoplerous" ("gloeohyphae") if their high refractive index gives them an oily or granular appearance under the microscope. These cells may be yellowish or clear (hyaline). They can sometimes selectively be coloured by sulphovanillin or other reagents. The specialized cells termed cystidia can also be gloeoplerous.[16][17]

Classification based on growth location

Hyphae might be categorized as 'vegetative' or 'aerial.' Aerial hyphae of fungi produce asexual reproductive spores.[18]