There are 80 known moons of Jupiter, not counting a number of moonlets likely shed from the inner moons. All together, they form a satellite system which is called the Jovian system. The most massive of the moons are the four Galilean moons: Io, Europa, Ganymede, and Callisto, which were independently discovered in 1610 by Galileo Galilei and Simon Marius and were the first objects found to orbit a body that was neither Earth nor the Sun. Much more recently, beginning in 1892, dozens of far smaller Jovian moons have been detected and have received the names of lovers (or other sexual partners) or daughters of the Roman god Jupiter or his Greek equivalent Zeus. The Galilean moons are by far the largest and most massive objects to orbit Jupiter, with the remaining 76 known moons and the rings together composing just 0.003% of the total orbiting mass.

The Galilean moons. From left to right, in order of increasing distance from Jupiter: Io; Europa; Ganymede; Callisto.

The physical and orbital characteristics of the moons vary widely. The four Galileans are all over 3,100 kilometres (1,900 mi) in diameter; the largest Galilean, Ganymede, is the ninth largest object in the Solar System, after the Sun and seven of the planets, Ganymede being larger than Mercury. All other Jovian moons are less than 250 kilometres (160 mi) in diameter, with most barely exceeding 5 kilometres (3.1 mi).[note 1] Their orbital shapes range from nearly perfectly circular to highly eccentric and inclined, and many revolve in the direction opposite to Jupiter's rotation (retrograde motion). Orbital periods range from seven hours (taking less time than Jupiter does to rotate around its axis), to some three thousand times more (almost three Earth years). 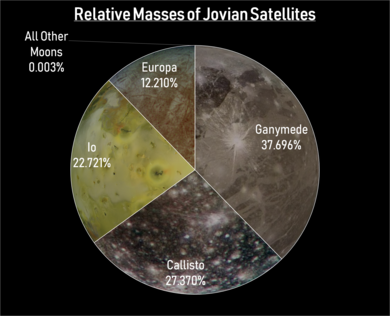 The relative masses of the Jovian moons. Those smaller than Europa are not visible at this scale, and combined would only be visible at 100× magnification.

Jupiter's regular satellites are believed to have formed from a circumplanetary disk, a ring of accreting gas and solid debris analogous to a protoplanetary disk.[1][2] They may be the remnants of a score of Galilean-mass satellites that formed early in Jupiter's history.[1][3]

Simulations suggest that, while the disk had a relatively high mass at any given moment, over time a substantial fraction (several tens of a percent) of the mass of Jupiter captured from the solar nebula was passed through it. However, only 2% of the proto-disk mass of Jupiter is required to explain the existing satellites.[1] Thus, several generations of Galilean-mass satellites may have been in Jupiter's early history. Each generation of moons might have spiraled into Jupiter, because of drag from the disk, with new moons then forming from the new debris captured from the solar nebula.[1] By the time the present (possibly fifth) generation formed, the disk had thinned so that it no longer greatly interfered with the moons' orbits.[3] The current Galilean moons were still affected, falling into and being partially protected by an orbital resonance with each other, which still exists for Io, Europa, and Ganymede. Ganymede's larger mass means that it would have migrated inward at a faster rate than Europa or Io.[1]

The outer, irregular moons are thought to have originated from captured asteroids, whereas the protolunar disk was still massive enough to absorb much of their momentum and thus capture them into orbit. Many are believed to have broken up by mechanical stresses during capture, or afterward by collisions with other small bodies, producing the moons we see today.[4] 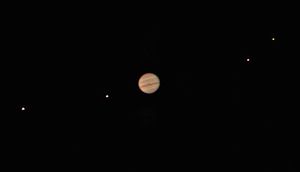 Jupiter and the Galilean moons through a 25 cm (10 in) Meade LX200 telescope. 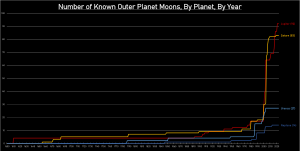 The number of moons known for each of the four outer planets up to October 2019. Jupiter currently has 80 known satellites.

Chinese historian Xi Zezong claimed that the earliest record of a Jovian moon (Ganymede or Callisto) was a note by Chinese astronomer Gan De of an observation around 364 BC regarding a "reddish star".[5] However, the first certain observations of Jupiter's satellites were those of Galileo Galilei in 1609.[6] By January 1610, he had sighted the four massive Galilean moons with his 20× magnification telescope, and he published his results in March 1610.[7]

Simon Marius had independently discovered the moons one day after Galileo, although he did not publish his book on the subject until 1614. Even so, the names Marius assigned are used today: Ganymede, Callisto, Io, and Europa.[8] No additional satellites were discovered until E. E. Barnard observed Amalthea in 1892.[9]

No additional moons were discovered for two decades, but between October 1999 and February 2003, researchers found another 34 moons using sensitive ground-based detectors.[19] These are tiny moons, in long, eccentric, generally retrograde orbits, and averaging 3 km (1.9 mi) in diameter, with the largest being just 9 km (5.6 mi) across. All of these moons are thought to have been captured asteroidal or perhaps comet bodies, possibly fragmented into several pieces.[20][21]

By 2015, a total of 15 additional moons were discovered.[21] Two more were discovered in 2016 by the team led by Scott S. Sheppard at the Carnegie Institution for Science, bringing the total to 69.[22] On 17 July 2018, the International Astronomical Union confirmed that Sheppard's team had discovered ten more moons around Jupiter, bringing the total number to 79.[23] Among these is Valetudo, which has a prograde orbit, but crosses paths with several moons that have retrograde orbits, making an eventual collision—at some point on a billions-of-years timescale—likely.[23]

In September 2020, researchers from the University of British Columbia identified 45 candidate moons from an analysis of archival images taken in 2010 by the Canada-France-Hawaii Telescope.[24] These candidates were mainly small and faint, down to a magnitude of 25.7 or over 800 m (0.50 mi) in diameter. From the number of candidate moons detected within a sky area of one square degree, the team extrapolated that the population of retrograde Jovian moons brighter than magnitude 25.7 is around 600, within a factor of 2.[25] Although the team considers their characterised candidates to be likely moons of Jupiter, they all remain unconfirmed due to their insufficient observation data for determining reliable orbits for each of them.[24] 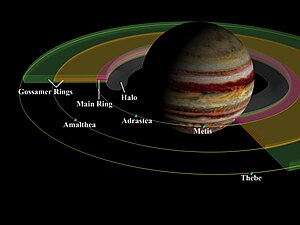 Orbits of Jupiter's inner moons within its rings

The Galilean moons of Jupiter (Io, Europa, Ganymede, and Callisto) were named by Simon Marius soon after their discovery in 1610.[26] However, these names fell out of favor until the 20th century. The astronomical literature instead simply referred to "Jupiter I", "Jupiter II", etc., or "the first satellite of Jupiter", "Jupiter's second satellite", and so on.[26] The names Io, Europa, Ganymede, and Callisto became popular in the mid-20th century,[27] whereas the rest of the moons remained unnamed and were usually numbered in Roman numerals V (5) to XII (12).[28][29] Jupiter V was discovered in 1892 and given the name Amalthea by a popular though unofficial convention, a name first used by French astronomer Camille Flammarion.[19][30]

The other moons were simply labeled by their Roman numeral (e.g. Jupiter IX) in the majority of astronomical literature until the 1970s.[31] Several different suggestions were made for names of Jupiter's outer satellites, but none were universally accepted until 1975 when the International Astronomical Union's (IAU) Task Group for Outer Solar System Nomenclature granted names to satellites V–XIII,[32] and provided for a formal naming process for future satellites still to be discovered.[32] The practice was to name newly discovered moons of Jupiter after lovers and favorites of the god Jupiter (Zeus) and, since 2004, also after their descendants.[19] All of Jupiter's satellites from XXXIV (Euporie) onward are named after descendants of Jupiter or Zeus,[19] except LIII (Dia), named after a lover of Jupiter. Names ending with "a" or "o" are used for prograde irregular satellites (the latter for highly inclined satellites), and names ending with "e" are used for retrograde irregulars.[33] With the discovery of smaller, kilometre-sized moons around Jupiter, the IAU has established an additional convention to limit the naming of small moons with absolute magnitudes greater than 18 or diameters smaller than 1 km (0.62 mi).[34] Some of the most recently confirmed moons have not received names.

Some asteroids share the same names as moons of Jupiter: 9 Metis, 38 Leda, 52 Europa, 85 Io, 113 Amalthea, 239 Adrastea. Two more asteroids previously shared the names of Jovian moons until spelling differences were made permanent by the IAU: Ganymede and asteroid 1036 Ganymed; and Callisto and asteroid 204 Kallisto.

The orbits of Jupiter's irregular satellites, and how they cluster into groups: by semi-major axis (the horizontal axis in Gm); by orbital inclination (the vertical axis); and orbital eccentricity (the yellow lines). The relative sizes are indicated by the circles.

These have prograde and nearly circular orbits of low inclination and are split into two groups: 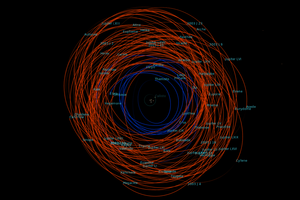 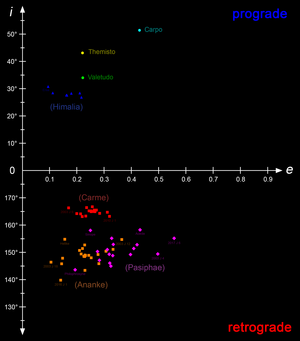 Inclinations (°) vs. eccentricities of Jupiter's irregular satellites, with the major groups identified. Data as of 2021.

The irregular satellites are substantially smaller objects with more distant and eccentric orbits. They form families with shared similarities in orbit (semi-major axis, inclination, eccentricity) and composition; it is believed that these are at least partially collisional families that were created when larger (but still small) parent bodies were shattered by impacts from asteroids captured by Jupiter's gravitational field. These families bear the names of their largest members. The identification of satellite families is tentative, but the following are typically listed:[42][43][44]

The moons of Jupiter are listed below by orbital period. Moons massive enough for their surfaces to have collapsed into a spheroid are highlighted in bold. These are the four Galilean moons, which are comparable in size to the Moon. The other moons are much smaller, with the least massive Galilean moon being more than 7,000 times more massive than the most massive of the other moons. The irregular captured moons are shaded light gray when prograde and dark gray when retrograde. The orbits and mean distances of the irregular moons are strongly variable over short timescales due to frequent planetary and solar perturbations,[46] therefore the listed orbital elements of all irregular moons are averaged over a 400-year numerical integration. Their orbital elements are all based on the epoch of 1 January 2000 Terrestrial Time.[47] (As of 2021), S/2003 J 10 is the only moon of Jupiter considered lost due to its uncertain orbit.[48] A number of other moons have only been observed for a year or two, but have decent enough orbits to be easily measurable at present.[46]

The orbit and motion of the Galilean moons around Jupiter, as captured by JunoCam aboard the Juno spacecraft.

Nine spacecraft have visited Jupiter. The first were Pioneer 10 in 1973, and Pioneer 11 a year later, taking low-resolution images of the four Galilean moons and returning data on their atmospheres and radiation belts.[55] The Voyager 1 and Voyager 2 probes visited Jupiter in 1979, discovering the volcanic activity on Io and the presence of water ice on the surface of Europa. Ulysses further studied Jupiter's magnetosphere in 1992 and then again in 2000.

The Galileo spacecraft was the first to enter orbit around Jupiter, arriving in 1995 and studying it until 2003. During this period, Galileo gathered a large amount of information about the Jovian system, making close approaches to all of the Galilean moons and finding evidence for thin atmospheres on three of them, as well as the possibility of liquid water beneath the surfaces of Europa, Ganymede, and Callisto. It also discovered a magnetic field around Ganymede.

Ganymede taken by Juno during its 34th perijove.

In 2016, the Juno spacecraft imaged the Galilean moons from above their orbital plane as it approached Jupiter orbit insertion, creating a time-lapse movie of their motion.[56]