The Swiss Space Office (SSO) manages the national space program of Switzerland.[1] The SSO is part of the State Secretariat for Education, Research, and Innovation. The head of the SSO is Renato Krpoun.[2]

Switzerland is a founding member of the European Space Agency, and has actively participated in European space development since 1960. The Swiss Space Office opened in 1998. The role of the SSO expanded to cover all aspects of space policy in 2000, when the new national constitution came into force.[3]

According to Jane's, the SSO is "the administrative unit charged with planning and implementing Swiss space policy", which was defined by the Swiss Federal Council.[4] The SSO office in Bern includes the Federal Commission for Space Affairs (CFAS), and the Interdepartmental Coordination Committee for Space Affairs (IKAR).[1]

Claude Nicollier is a Swiss Astronaut and has been on several missions with the United States space program in the 1990s and is also a member of the European Astronaut Corps. By 2007 he had retired from Swiss space missions to become a professor at EPFL.[5] Switzerland's Marc Bertschi became the head of the ESA launcher program in 2007.[6] 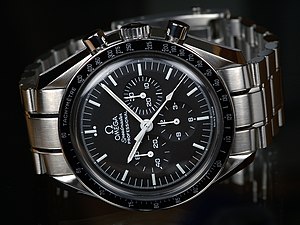 After elaborate testing, the Swiss Omega Speedmaster Professional watch became certified for NASA space missions in 1965 and was used by the first people on the moon

Selected examples of Swiss contributions to space exploration and technology.[7]