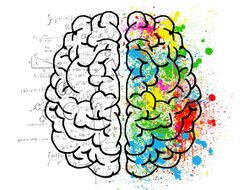 The psychological theory around brain lateralization has been considered around hyperfocus as a mental health symptom. It is under study but not empirically proven.[1][2][3]

Hyperfocus is an intense form of mental concentration or visualization that focuses consciousness on a subject, topic, or task. In some individuals, various subjects or topics may also include daydreams, concepts, fiction, the imagination, and other objects of the mind. Hyperfocus on a certain subject can cause side-tracking away from assigned or important tasks.

Psychiatrically, it is considered to be a symptom of ADHD together with inattention, and it has been proposed as a symptom of other conditions, such as autism spectrum disorder (ASD).[4][5]

Hyperfocus may bear a relationship to the concept of flow.[5] In some circumstances, both flow and hyperfocus can be an aid to achievement, but in other circumstances or situations, the same focus and behavior could be a liability, distracting from the task at hand. However, unlike hyperfocus, "flow" is often described in more glowing terms, suggesting they are not two sides of the same condition under contrasting circumstance or intellect.[3]

Hyperfocus may in some cases also be symptomatic of a psychiatric condition. In some cases, it is referred to as perseveration[5]—an inability or impairment in switching tasks or activities ("set-shifting"),[6] or desisting from mental or physical response repetition (gestures, words, thoughts) despite absence or cessation of a stimulus.[7][8][9][10] It is distinguished from stereotypy (a highly repetitive idiosyncratic behaviour).[4]

Conditions associated with hyperfocus or perseveration include neurodevelopmental disorders, particularly those considered to be on the autism spectrum and attention deficit hyperactivity disorder (ADHD). In ADHD, it may be a coping mechanism or a symptom of emotional self-regulation. So called "twice exceptional" people, with high intellect and learning disabilities, may have either or both of hyperfocus and perseverative behaviours.[5][4] They are often mimicked by similar conditions involving executive dysfunction or emotional dysregulation, and lack of diagnosis and treatment may lead to further co-morbidity.[4] 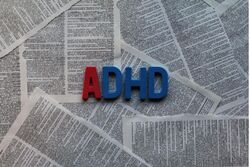 People with ADHD may find organization (such as with paperwork) difficult, but they may hyperfocus on other interesting things such as art.[2][3][4]

In ADHD, formulation and thinking can be slower than in neurotypical people (though this is not universal), and may be "long winded or tangential".[4][11] These inattentive symptoms occur dually with what has been termed "hyperfocus" by the 2019 European Consensus Statement on Adult ADHD. The over-concentration or hyperfocus often occurs if the person finds something "very interesting and/or provide(s) instant gratification, such as computer games or online chatting. For such activities, concentration may last for hours on end, in a very focused manner."[4]

Some types of ADHD are a difficulty in directing one's attention (an executive function of the frontal lobe), not a lack of attention.[12][13][14]

Conditions unlikely to be confused with hyperfocus often involve repetition of thoughts or behaviors such as obsessive–compulsive disorder (OCD), trauma,[15] and some cases of traumatic brain injury.[6]