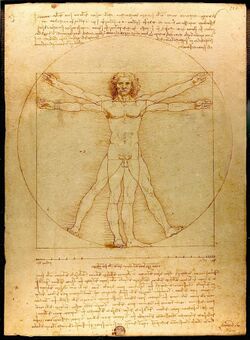 Vitruvian Man or the perfect man by Leonardo da Vinci

Philosophical anthropology, sometimes called anthropological philosophy,[1][2] is a discipline dealing with questions of metaphysics and phenomenology of the human person.

Augustine of Hippo was one of the first Christian ancient Latin authors with a very clear anthropological vision, although it is not clear if he had any influence on Max Scheler, the founder of philosophical anthropology as an independent discipline, nor on any of the major philosophers that followed him. Augustine has been cited by Husserl and Heidegger as one of the early writers to inquire on time-consciousness and the role of seeing in the feeling of "Being-in-the-world".[3][4]

Augustine saw the human being as a perfect unity of two substances: soul and body.[5] He was much closer in this anthropological view to Aristotle than to Plato.[6][7] In his late treatise On Care to Be Had for the Dead sec. 5 (420 AD) he insisted that the body is essential part of the human person:

In no wise are the bodies themselves to be spurned. (...) For these pertain not to ornament or aid which is applied from without, but to the very nature of man.[8]

Augustine's favourite figure to describe body-soul unity is marriage: caro tua, coniux tua – your body is your wife.[9] Initially, the two elements were in perfect harmony. After the fall of humanity they are now experiencing dramatic combat between one another.

They are two categorically different things: the body is a three-dimensional object composed of the four elements, whereas the soul has no spatial dimensions.[10] Soul is a kind of substance, participating in reason, fit for ruling the body.[11] Augustine was not preoccupied, as Plato and Descartes were, with going too much into detail in his efforts to explain the metaphysics of the soul-body union. It sufficed for him to admit that they were metaphysically distinct. To be a human is to be a composite of soul and body, and that the soul is superior to the body. The latter statement is grounded in his hierarchical classification of things into those that merely exist, those that exist and live, and those that exist, live, and have intelligence or reason.[12][13]

According to N. Blasquez, Augustine's dualism of substances of the body and soul doesn't stop him from seeing the unity of body and soul as a substance itself.[7][14] Following Aristotle and other ancient philosophers, he defined man as a rational mortal animal – animal rationale mortale.[15][16]

Philosophical anthropology as a kind of thought, before it was founded as a distinct philosophical discipline in the 1920s, emerged as post-medieval thought striving for emancipation from Christian religion and Aristotelic tradition.[17] The origin of this liberation, characteristic of modernity, has been the Cartesian skepticism formulated by Descartes in the first two of his Meditations on First Philosophy (1641).

Immanuel Kant (1724–1804) taught the first lectures on anthropology in the European academic world. He specifically developed a conception of pragmatic anthropology, according to which the human being is studied as a free agent. At the same time, he conceived of his anthropology as an empirical, not a strictly philosophical discipline.[18] Both his philosophical and his anthropological work has been one of the influences in the field during the 19th and 20th century.[19][20] After Kant, Ludwig Feuerbach is sometimes considered the next most important influence and founder of anthropological philosophy.[21][22]

During the 19th century, an important contribution came from post-Kantian German idealists like Fichte, Schelling and Hegel,[19] as well from Søren Kierkegaard.[23]

Since its development in the 1920s, in the milieu of Germany Weimar culture, philosophical anthropology has been turned into a philosophical discipline, competing with the other traditional sub-disciplines of philosophy such as epistemology, ethics, metaphysics, logic, and aesthetics.[24] It is the attempt to unify disparate ways of understanding behaviour of humans as both creatures of their social environments and creators of their own values. Although the majority of philosophers throughout the history of philosophy can be said to have a distinctive "anthropology" that undergirds their thought, philosophical anthropology itself, as a specific discipline in philosophy, arose within the later modern period as an outgrowth from developing methods in philosophy, such as phenomenology and existentialism. The former, which draws its energy from methodical reflection on human experience (first person perspective) as from the philosopher's own personal experience, naturally aided the emergence of philosophical explorations of human nature and the human condition.

Scheler defined the human being not so much as a "rational animal" (as has traditionally been the case since Aristotle) but essentially as a "loving being". He breaks down the traditional hylomorphic conception of the human person, and describes the personal being with a tripartite structure of lived body, soul, and spirit. Love and hatred are not psychological emotions, but spiritual, intentional acts of the person, which he categorises as "intentional feelings."[clarification needed] Scheler based his philosophical anthropology in a Christian metaphysics of the spirit.[25] Helmuth Plessner would later emancipate philosophical anthropology from Christianity.[25]

Helmuth Plessner and Arnold Gehlen have been influenced by Scheler, and they are the three major representatives of philosophical anthropology as a movement.

Ernst Cassirer, a neo-Kantian philosopher, was the most influential source for the definition and development of the field from the 1940s until the 1960s.[26] Particularly influential has been Cassirer's description of man as a symbolic animal,[26] which has been reprised in the 1960s by Gilbert Durand, scholar of symbolic anthropology and the imaginary.

In 1953, future pope Karol Wojtyla based his dissertation thesis on Max Scheler, limiting himself to the works Scheler wrote before rejecting Catholicism and the Judeo-Christian tradition in 1920. Wojtyla used Scheler as an example that phenomenology could be reconciled with Catholicism.[27] Some authors have argued that Wojtyla influenced philosophical anthropology.[28][lower-alpha 1]

A large focus of philosophical anthropology is also interpersonal relationships, as an attempt to unify disparate ways of understanding the behaviour of humans as both creatures of their social environments and creators of their own values. It analyses also the ontology that is in play in human relationships – of which intersubjectivity is a major theme. Intersubjectivity is the study of how two individuals, subjects, whose experiences and interpretations of the world are radically different understand and relate to each other.

Recently anthropology has begun to shift towards studies of intersubjectivity and other existential/phenomenological themes. Studies of language have also gained new prominence in philosophy and sociology due to language's close ties with the question of intersubjectivity.

The academic Michael D. Jackson is another important philosophical anthropologist. His research and fieldwork concentrate on existential themes of "being in the world" (Dasein) as well as interpersonal relationships. His methodology challenges traditional anthropology due to its focus on first-person experience. In his most well known book, Minima Ethnographica which focuses on intersubjectivity and interpersonal relationships, he draws upon his ethnographic fieldwork in order to explore existential theory.

In his latest book, Existential Anthropology, he explores the notion of control, stating that humans anthropomorphize inanimate objects around them in order to enter into an interpersonal relationship with them. In this way humans are able to feel as if they have control over situations that they cannot control because rather than treating the object as an object, they treat it as if it is a rational being capable of understanding their feelings and language. Good examples are prayer to gods to alleviate drought or to help a sick person or cursing at a computer that has ceased to function.

A foremost Wittgensteinian, P. M. S. Hacker has recently completed a tetralogy in philosophical anthropology: “The first was Human Nature: The Categorical Framework (2007), which provided the stage set. The second was The Intellectual Powers: A Study of Human Nature (2013), which began the play with the presentation of the intellect and its courtiers. The third The Passions: A Study of Human Nature (2017), which introduced the drama of the passions and the emotions. The fourth and final volume, The Moral Powers: A Study of Human Nature (2020), turns to the moral powers and the will, to good and evil, to pleasure and happiness, to what gives meaning to our lives, and the place of death in our lives. This tetralogy constitutes a Summa Anthropologica in as much as it presents a systematic categorical overview of our thought and talk of human nature, ranging from substance, power, and causation to good and evil and the meaning of life. A sine qua non of any philosophical investigation, according to Grice, is a synopsis of the relevant logico-linguistic grammar. It is surely unreasonable that each generation should have to amass afresh these grammatical norms of conceptual exclusion, implication, compatibility, and contextual presupposition, as well as tense and person anomalies and asymmetries. So via the tetralogy I have attempted to provide a compendium of usage of the pertinent categories in philosophical anthropology to assist others in their travels through these landscapes.”