Axial cross section of Carnot's heat engine. In this diagram, abcd is a cylindrical vessel, cd is a movable piston, and A and B are constant–temperature bodies. The vessel may be placed in contact with either body or removed from both (as it is here).[1]

A Carnot heat engine[2] is a heat engine that operates on the Carnot cycle. The basic model for this engine was developed by Nicolas Léonard Sadi Carnot in 1824. The Carnot engine model was graphically expanded by Benoît Paul Émile Clapeyron in 1834 and mathematically explored by Rudolf Clausius in 1857, work that led to the fundamental thermodynamic concept of entropy. The Carnot engine is the most efficient heat engine which is theoretically possible.[3] The efficiency depends only upon the absolute temperatures of the hot and cold heat reservoirs between which it operates.

A heat engine acts by transferring energy from a warm region to a cool region of space and, in the process, converting some of that energy to mechanical work. The cycle may also be reversed. The system may be worked upon by an external force, and in the process, it can transfer thermal energy from a cooler system to a warmer one, thereby acting as a refrigerator or heat pump rather than a heat engine.

Every thermodynamic system exists in a particular state. A thermodynamic cycle occurs when a system is taken through a series of different states, and finally returned to its initial state. In the process of going through this cycle, the system may perform work on its surroundings, thereby acting as a heat engine.

In the adjacent diagram, from Carnot's 1824 work, Reflections on the Motive Power of Fire,[4] there are "two bodies A and B, kept each at a constant temperature, that of A being higher than that of B. These two bodies to which we can give, or from which we can remove the heat without causing their temperatures to vary, exercise the functions of two unlimited reservoirs of caloric. We will call the first the furnace and the second the refrigerator.”[5] Carnot then explains how we can obtain motive power, i.e., “work”, by carrying a certain quantity of heat from body A to body B. It also acts as a cooler and hence can also act as a refrigerator.

Carnot engine diagram (modern) - where an amount of heat QH flows from a high temperature TH furnace through the fluid of the "working body" (working substance) and the remaining heat QC flows into the cold sink TC, thus forcing the working substance to do mechanical work W on the surroundings, via cycles of contractions and expansions.

The previous image shows the original piston-and-cylinder diagram used by Carnot in discussing his ideal engine. The figure at right shows a block diagram of a generic heat engine, such as the Carnot engine. In the diagram, the “working body” (system), a term introduced by Clausius in 1850, can be any fluid or vapor body through which heat Q can be introduced or transmitted to produce work. Carnot had postulated that the fluid body could be any substance capable of expansion, such as vapor of water, vapor of alcohol, vapor of mercury, a permanent gas, air, etc. Although in those early years, engines came in a number of configurations, typically QH was supplied by a boiler, wherein water was boiled over a furnace; QC was typically removed by a stream of cold flowing water in the form of a condenser located on a separate part of the engine. The output work, W, is transmitted by the movement of the piston as it is used to turn a crank-arm, which in turn was typically used to power a pulley so as to lift water out of flooded salt mines. Carnot defined work as “weight lifted through a height”. 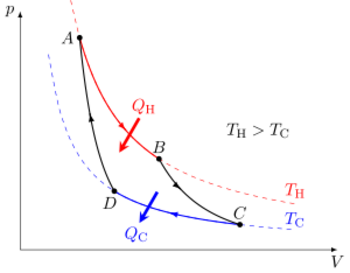 Figure 1: A Carnot cycle illustrated on a PV diagram to illustrate the work done. 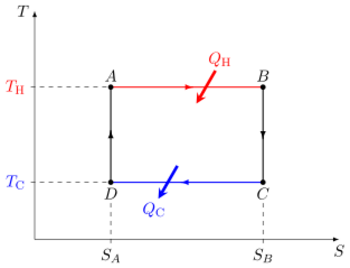 The Carnot cycle when acting as a heat engine consists of the following steps:

Real ideal engines (left) compared to the Carnot cycle (right). The entropy of a real material changes with temperature. This change is indicated by the curve on a T–S diagram. For this figure, the curve indicates a vapor-liquid equilibrium (See Rankine cycle). Irreversible systems and losses of heat (for example, due to friction) prevent the ideal from taking place at every step.

Explanation
This maximum efficiency [math]\displaystyle{ \eta_\text{I} }[/math] is defined as above:

A corollary to Carnot's theorem states that: All reversible engines operating between the same heat reservoirs are equally efficient.

It is easily shown that the efficiency η is maximum when the entire cyclic process is a reversible process. This means the total entropy of system and surroundings (the entropies of the hot furnace, the "working fluid" of the heat engine, and the cold sink) remains constant when the "working fluid" completes one cycle and returns to its original state. (In the general and more realistic case of an irreversible process, the total entropy of this combined system would increase.)

Since the "working fluid" comes back to the same state after one cycle, and entropy of the system is a state function, the change in entropy of the "working fluid" system is 0. Thus, it implies that the total entropy change of the furnace and sink is zero, for the process to be reversible and the efficiency of the engine to be maximum. This derivation is carried out in the next section.

The coefficient of performance (COP) of the heat engine is the reciprocal of its efficiency.

For a real heat engine, the total thermodynamic process is generally irreversible. The working fluid is brought back to its initial state after one cycle, and thus the change of entropy of the fluid system is 0, but the sum of the entropy changes in the hot and cold reservoir in this one cyclical process is greater than 0.

where the temperature of the fluid T is always slightly lesser than [math]\displaystyle{ T_\text{H} }[/math], in this process.

So, one would get:

Similarly, at the time of heat injection from the fluid to the cold reservoir one would have, for the magnitude of total entropy change [math]\displaystyle{ \Delta S_\text{C} }[/math]< 0 of the fluid in the process of expelling heat:

where, during this process of transfer of heat to the cold reservoir, the temperature of the fluid T is always slightly greater than [math]\displaystyle{ T_\text{C} }[/math].

We have only considered the magnitude of the entropy change here. Since the total change of entropy of the fluid system for the cyclic process is 0, we must have

The previous three equations combine to give:[7]

According to the second theorem, "The efficiency of the Carnot engine is independent of the nature of the working substance".

The Carnot engine and Rudolf Diesel

In 1892 Rudolf Diesel patented an internal combustion engine inspired by the Carnot engine. Diesel knew a Carnot engine is an ideal that cannot be built, but he thought he had invented a working approximation. His principle was unsound, but in his struggle to implement it he developed the practical engine that bears his name.

The conceptual problem was how to achieve isothermal expansion in an internal combustion engine, since burning fuel at the highest temperature of the cycle would only raise the temperature further. Diesel's patented solution was: having achieved the highest temperature just by compressing the air, to add a small amount of fuel at a controlled rate, such that heating caused by burning the fuel would be counteracted by cooling caused by air expansion as the piston moved. Hence all the heat from the fuel would be transformed into work during the isothermal expansion, as required by Carnot's theorem.

For the idea to work a small mass of fuel would have to be burnt in a huge mass of air. Diesel first proposed a working engine that would compress air to 250 atmospheres at 800 °C, then cycle to one atmosphere at 20 °C. However, this was well beyond the technological capabilities of the day, since it implied a compression ratio of 60:1. Such an engine, could it have been built, would have had an efficiency of 73%. (In contrast, the best steam engines of his day achieved 7%.)

Accordingly, Diesel sought to compromise. He calculated that, were he to reduce the peak pressure to a less ambitious 90 atmospheres, he would sacrifice only 5% of the thermal efficiency. Seeking financial support, he published the "Theory and Construction of a Rational Heat Engine to Take the Place of the Steam Engine and All Presently Known Combustion Engines" (1893). Endorsed by scientific opinion, including Lord Kelvin, he won the backing of Krupp and Maschinenfabrik Augsburg. He clung to the Carnot cycle as a symbol. But years of practical work failed to achieve an isothermal combustion engine, nor could have done, since it requires such an enormous quantity of air that it cannot develop enough power to compress it. Furthermore, controlled fuel injection turned out to be no easy matter.

Even so, it slowly evolved over 25 years to become a practical high-compression air engine, its fuel injected near the end of the compression stroke and ignited by the heat of compression, in a word, the diesel engine. Today its efficiency is 40%.[8]

Episode 46. Engine of Nature: The Carnot engine, part one, beginning with simple steam engines. The Mechanical Universe. Caltech – via YouTube.