in thermodynamics, Carnot's theorem, developed in 1824 by Nicolas Léonard Sadi Carnot, also called Carnot's rule, is a principle that specifies limits on the maximum efficiency that any heat engine can obtain. 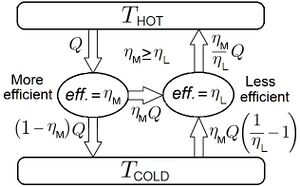 An impossible situation: A heat engine cannot drive a less efficient (reversible) heat engine without violating the second law of thermodynamics. Quantities in this figure are the absolute values of energy transfers (heat and work).

The definition of the efficiency is [math]\displaystyle{ \eta=W/Q_h^{out} }[/math] for each engine and the following expressions can be made:

For each engine, the absolute value of the energy entering the engine, [math]\displaystyle{ E_{abs}^\text{in} }[/math], must be equal to the absolute value of the energy leaving from the engine, [math]\displaystyle{ E_{abs}^\text{out} }[/math]. Otherwise, energy is continuously accumulated in an engine or the conservation of energy is violated by taking more energy from an engine than input energy to the engine:

Having established that the right figure values are correct, Carnot's theorem may be proven for irreversible and the reversible heat engines as shown below.[3]

All reversible heat engines that operate between the same two thermal (heat) reservoirs have the same efficiency.

This conclusion is an important result because it helps establish the Clausius theorem, which implies that the change in entropy [math]\displaystyle{ S }[/math] is unique for all reversible processes:[4]

as the entropy change, that is made during a transition from a thermodynamic equilibrium state [math]\displaystyle{ a }[/math] to a state [math]\displaystyle{ b }[/math] in a V-T (Volume-Temperature) space, is the same over all reversible process paths between these two states. If this integral were not path independent, then entropy would not be a state variable.[5]

No irreversible heat engine is more efficient than a Carnot heat engine operating between the same two thermal reservoirs.

Therefore, if thermodynamic temperature is defined by

then the function viewed as a function of thermodynamic temperature, is

It follows immediately that

Substituting this equation back into the above equation [math]\displaystyle{ \frac{q_C}{q_H} = f(T_H,T_C) }[/math] gives a relationship for the efficiency in terms of thermodynamic temperatures:

Applicability to fuel cells and batteries

Since fuel cells and batteries can generate useful power when all components of the system are at the same temperature ([math]\displaystyle{ T=T_H=T_C }[/math]), they are clearly not limited by Carnot's theorem, which states that no power can be generated when [math]\displaystyle{ T_H=T_C }[/math]. This is because Carnot's theorem applies to engines converting thermal energy to work, whereas fuel cells and batteries instead convert chemical energy to work.[7] Nevertheless, the second law of thermodynamics still provides restrictions on fuel cell and battery energy conversion.[8]

A Carnot battery is a type of energy storage system that stores electricity in heat storage and converts the stored heat back to electricity through thermodynamic cycles.[9]