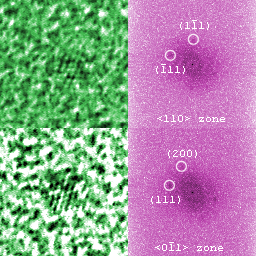 Zone axis, a term sometimes used to refer to "high-symmetry" orientations in a crystal, most generally refers to any direction referenced to the direct lattice (as distinct from the reciprocal lattice) of a crystal in three dimensions. It is therefore indexed with direct lattice indices, instead of with Miller indices.

High-symmetry zone axes through a crystal lattice, in particular, often lie in the direction of tunnels through the crystal between planes of atoms. This is because, as we see below, such zone axis directions generally lie within more than one plane of atoms in the crystal.

Crystal-lattice translational invariance[1][2] is described by a set of unit-cell direct-lattice (contra-variant[3] or polar) basis-vectors a, b, c, or in essence by the magnitudes of these vectors (the lattice parameters a, b and c) and the angles between them (namely α between b and c, β between c and a, and γ between a and b). Direct-lattice vectors have components measured in distance units, like meters or angstroms.

These lattice vectors are indexed by listing one (often integral) multiplier for each basis-triplet component, generally to be placed between either square [] or angle 〈〉 brackets. Thus the direct lattice-vector suvw or [u,v,w] is defined as ua+vb+wc. Angle brackets are used when you don't want to refer to a specific lattice vector, but to a symmetrically equivalent class of lattice vectors. In the case of a cubic lattice, for instance, 〈100〉 represents [100], [010] and [001] because each of these vectors is symmetrically equivalent.

The term zone axis, more specifically, refers to only the direction of a direct-space lattice vector. For example, since the [120] and [240] lattice vectors share a common direction, their orientations both correspond the [120] zone of the crystal. Just as a set of lattice-planes in direct-space corresponds to a reciprocal-lattice vector in the complementary-space of spatial-frequencies and momenta, a "zone" is defined[4][5] as a set of reciprocal-lattice planes in frequency-space that corresponds to a lattice-vector in direct-space.

Here as usual a* ≡ b×c/Vc, b* ≡ c×a/Vc, and c* ≡ a×b/Vc, where the unit cell volume is Vc = a•(b×c). Thus reciprocal-lattice vector ghkl or (h,k,l) = ha*+kb*+lc* has a direction perpendicular to the (hkl) crystallographic plane, and a magnitude ghkl = 1/dhkl equal to the reciprocal of the spacing between (hkl) planes, measured in spatial-frequency units e.g. of cycles per angstrom.

A useful and quite general rule of crystallographic "dual vector spaces in 3D" is that the condition for a direct lattice-vector [uvw] to have a direction (or zone-axis) perpendicular to the reciprocal lattice-vector [hkl] is simply hu+kv+lw = 0. This is true even if, as is often the case, the basis-vector set used to describe the lattice is not Cartesian.

By extension, then, a [uvw] zone-axis pattern (ZAP) is a diffraction pattern taken with an incident beam e.g. of electrons, X-rays or neutrons traveling along a lattice direction specified by the zone-axis indices [uvw]. Because of their small wavelength λ, the high energy electrons used in electron microscopes[7] have a very large Ewald sphere radius (1/λ) so that electron diffraction generally "lights up" diffraction spots with g-vectors (hkl) that are perpendicular to [uvw], i.e. for which hu+kv+lw=0. 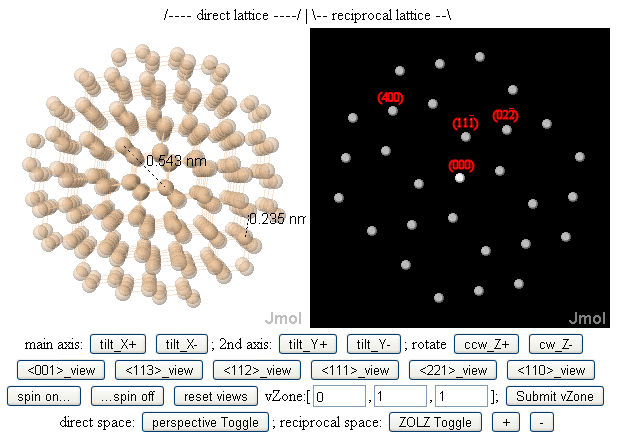 One result of this, as illustrated in the figure above, is that "low-index" zones are generally perpendicular to "low Miller-index" lattice planes, which in turn have small spatial frequencies (g-values) and hence large lattice periodicities (d-spacings). Put another way, in electron microscopy[8][9][10][11] if you want your electron beam to be directed down wide (hence easily visible) tunnels between columns of atoms in a crystal, directing the beam down a low-index (and by association high-symmetry) zone axis may help to this end.