The same vector can be represented in two different bases (purple and red arrows).

In mathematics, a set B of vectors in a vector space V is called a basis if every element of V may be written in a unique way as a finite linear combination of elements of B. The coefficients of this linear combination are referred to as components or coordinates of the vector with respect to B. The elements of a basis are called basis vectors.

A vector space can have several bases; however all the bases have the same number of elements, called the dimension of the vector space.

A basis B of a vector space V over a field F (such as the real numbers R or the complex numbers C) is a linearly independent subset of V that spans V. This means that a subset B of V is a basis if it satisfies the two following conditions:

The scalars [math]\displaystyle{ a_i }[/math] are called the coordinates of the vector v with respect to the basis B, and by the first property they are uniquely determined.

A vector space that has a finite basis is called finite-dimensional. In this case, the finite subset can be taken as B itself to check for linear independence in the above definition.

It is often convenient or even necessary to have an ordering on the basis vectors, for example, when discussing orientation, or when one considers the scalar coefficients of a vector with respect to a basis without referring explicitly to the basis elements. In this case, the ordering is necessary for associating each coefficient to the corresponding basis element. This ordering can be done by numbering the basis elements. In order to emphasize that an order has been chosen, one speaks of an ordered basis, which is therefore not simply an unstructured set, but a sequence, an indexed family, or similar; see § Ordered bases and coordinates below. 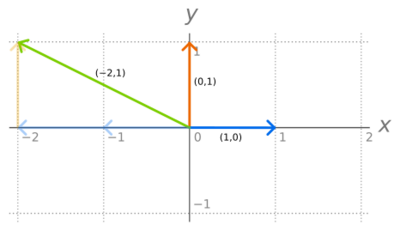 This picture illustrates the standard basis in R2. The blue and orange vectors are the elements of the basis; the green vector can be given in terms of the basis vectors, and so is linearly dependent upon them.

A different flavor of example is given by polynomial rings. If F is a field, the collection F[X] of all polynomials in one indeterminate X with coefficients in F is an F-vector space. One basis for this space is the monomial basis B, consisting of all monomials: [math]\displaystyle{ B=\{1, X, X^2, \ldots\}. }[/math] Any set of polynomials such that there is exactly one polynomial of each degree (such as the Bernstein basis polynomials or Chebyshev polynomials) is also a basis. (Such a set of polynomials is called a polynomial sequence.) But there are also many bases for F[X] that are not of this form.

Many properties of finite bases result from the Steinitz exchange lemma, which states that, for any vector space V, given a finite spanning set S and a linearly independent set L of n elements of V, one may replace n well-chosen elements of S by the elements of L to get a spanning set containing L, having its other elements in S, and having the same number of elements as S.

Most properties resulting from the Steinitz exchange lemma remain true when there is no finite spanning set, but their proofs in the infinite case generally require the axiom of choice or a weaker form of it, such as the ultrafilter lemma.

If V is a vector space over a field F, then:

If V is a vector space of dimension n, then:

Like for vector spaces, a basis of a module is a linearly independent subset that is also a generating set. A major difference with the theory of vector spaces is that not every module has a basis. A module that has a basis is called a free module. Free modules play a fundamental role in module theory, as they may be used for describing the structure of non-free modules through free resolutions.

In the context of infinite-dimensional vector spaces over the real or complex numbers, the term Hamel basis (named after Georg Hamel[2]) or algebraic basis can be used to refer to a basis as defined in this article. This is to make a distinction with other notions of "basis" that exist when infinite-dimensional vector spaces are endowed with extra structure. The most important alternatives are orthogonal bases on Hilbert spaces, Schauder bases, and Markushevich bases on normed linear spaces. In the case of the real numbers R viewed as a vector space over the field Q of rational numbers, Hamel bases are uncountable, and have specifically the cardinality of the continuum, which is the cardinal number [math]\displaystyle{ 2^{\aleph_0} }[/math], where [math]\displaystyle{ \aleph_0 }[/math] is the smallest infinite cardinal, the cardinal of the integers.

The common feature of the other notions is that they permit the taking of infinite linear combinations of the basis vectors in order to generate the space. This, of course, requires that infinite sums are meaningfully defined on these spaces, as is the case for topological vector spaces – a large class of vector spaces including e.g. Hilbert spaces, Banach spaces, or Fréchet spaces.

for suitable (real or complex) coefficients ak, bk. But many[3] square-integrable functions cannot be represented as finite linear combinations of these basis functions, which therefore do not comprise a Hamel basis. Every Hamel basis of this space is much bigger than this merely countably infinite set of functions. Hamel bases of spaces of this kind are typically not useful, whereas orthonormal bases of these spaces are essential in Fourier analysis.

The geometric notions of an affine space, projective space, convex set, and cone have related notions of basis.[4] An affine basis for an n-dimensional affine space is [math]\displaystyle{ n+1 }[/math] points in general linear position. A projective basis is [math]\displaystyle{ n+2 }[/math] points in general position, in a projective space of dimension n. A convex basis of a polytope is the set of the vertices of its convex hull. A cone basis[5] consists of one point by edge of a polygonal cone. See also a Hilbert basis (linear programming).

For a probability distribution in Rn with a probability density function, such as the equidistribution in an n-dimensional ball with respect to Lebesgue measure, it can be shown that n randomly and independently chosen vectors will form a basis with probability one, which is due to the fact that n linearly dependent vectors x1, ..., xn in Rn should satisfy the equation det[x1 ⋯ xn] = 0 (zero determinant of the matrix with columns xi), and the set of zeros of a non-trivial polynomial has zero measure. This observation has led to techniques for approximating random bases.[6][7] 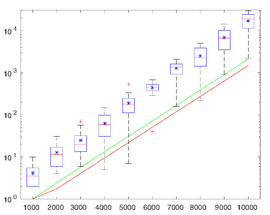 Empirical distribution of lengths N of pairwise almost orthogonal chains of vectors that are independently randomly sampled from the n-dimensional cube [−1, 1]n as a function of dimension, n. Boxplots show the second and third quartiles of this data for each n, red bars correspond to the medians, and blue stars indicate means. Red curve shows theoretical bound given by Eq. (1) and green curve shows a refined estimate.[7]

It is difficult to check numerically the linear dependence or exact orthogonality. Therefore, the notion of ε-orthogonality is used. For spaces with inner product, x is ε-orthogonal to y if [math]\displaystyle{ \left|\left\langle x,y \right\rangle\right| / \left(\left\|x\right\|\left\|y\right\|\right) \lt \varepsilon }[/math] (that is, cosine of the angle between x and y is less than ε).

N random vectors are all pairwise ε-orthogonal with probability 1 − θ.[7] This N growth exponentially with dimension n and [math]\displaystyle{ N\gg n }[/math] for sufficiently big n. This property of random bases is a manifestation of the so-called measure concentration phenomenon.[8]

The figure (right) illustrates distribution of lengths N of pairwise almost orthogonal chains of vectors that are independently randomly sampled from the n-dimensional cube [−1, 1]n as a function of dimension, n. A point is first randomly selected in the cube. The second point is randomly chosen in the same cube. If the angle between the vectors was within π/2 ± 0.037π/2 then the vector was retained. At the next step a new vector is generated in the same hypercube, and its angles with the previously generated vectors are evaluated. If these angles are within π/2 ± 0.037π/2 then the vector is retained. The process is repeated until the chain of almost orthogonality breaks, and the number of such pairwise almost orthogonal vectors (length of the chain) is recorded. For each n, 20 pairwise almost orthogonal chains were constructed numerically for each dimension. Distribution of the length of these chains is presented.

Proof that every vector space has a basis

Let V be any vector space over some field F. Let X be the set of all linearly independent subsets of V.

The set X is nonempty since the empty set is an independent subset of V, and it is partially ordered by inclusion, which is denoted, as usual, by ⊆.

Let Y be a subset of X that is totally ordered by ⊆, and let LY be the union of all the elements of Y (which are themselves certain subsets of V).

As X is nonempty, and every totally ordered subset of (X, ⊆) has an upper bound in X, Zorn's lemma asserts that X has a maximal element. In other words, there exists some element Lmax of X satisfying the condition that whenever Lmax ⊆ L for some element L of X, then L = Lmax.

If there were some vector w of V that is not in the span of Lmax, then w would not be an element of Lmax either. Let Lw = Lmax ∪ {w}. This set is an element of X, that is, it is a linearly independent subset of V (because w is not in the span of Lmax, and Lmax is independent). As Lmax ⊆ Lw, and Lmax ≠ Lw (because Lw contains the vector w that is not contained in Lmax), this contradicts the maximality of Lmax. Thus this shows that Lmax spans V.

Hence Lmax is linearly independent and spans V. It is thus a basis of V, and this proves that every vector space has a basis.