Short description: Open-source implementation of the SSL and TLS protocols

OpenSSL is a software library for applications that secure communications over computer networks against eavesdropping or need to identify the party at the other end. It is widely used by Internet servers, including the majority of HTTPS websites.

OpenSSL contains an open-source implementation of the SSL and TLS protocols. The core library, written in the C programming language, implements basic cryptographic functions and provides various utility functions. Wrappers allowing the use of the OpenSSL library in a variety of computer languages are available.

OpenSSL is available for most Unix-like operating systems (including Linux, macOS, and BSD) and Microsoft Windows.

The OpenSSL project was founded in 1998 to provide a free set of encryption tools for the code used on the Internet. It is based on a fork of SSLeay by Eric Andrew Young and Tim Hudson, which unofficially ended development on December 17, 1998, when Young and Hudson both went to work for RSA Security. The initial founding members were Mark Cox, Ralf Engelschall, Stephen Henson, Ben Laurie, and Paul Sutton.[4]

The project has a budget of less than one million USD per year and relies primarily on donations. Development of TLS 1.3 is sponsored by Akamai.[8]

FIPS 140 is a U.S. Federal program for the testing and certification of cryptographic modules. An early FIPS 140-1 certificate for OpenSSL's FOM 1.0 was revoked in July 2006 "when questions were raised about the validated module's interaction with outside software." The module was re-certified in February 2007 before giving way to FIPS 140-2.[22] OpenSSL 1.0.2 supported the use of the OpenSSL FIPS Object Module (FOM), which was built to deliver FIPS approved algorithms in a FIPS 140-2 validated environment.[23][24] OpenSSL controversially decided to categorize the 1.0.2 architecture as 'End of Life' or 'EOL', effective December 31, 2019, despite objections that it was the only version of OpenSSL that was currently available with support for FIPS mode.[25] As a result of the EOL, many users were unable to properly deploy the FOM 2.0 and fell out of compliance because they did not secure Extended Support for the 1.0.2 architecture, although the FOM itself remained validated for eight months further.

OpenSSL 3.0 restored FIPS mode and underwent FIPS 140-2 testing, but with significant delays: The effort was first kicked off in 2016 with support from SafeLogic[31][32][33] and further support from Oracle in 2017,[34][35] but the process has been challenging.[36] On October 20, 2020, the OpenSSL FIPS Provider 3.0 was added to the CMVP Implementation Under Test List, which reflected an official engagement with a testing lab to proceed with a FIPS 140-2 validation. This resulted in a slew of certifications in the following months.[37]

OpenSSL announced in August 2015 that it would require most contributors to sign a Contributor License Agreement (CLA), and that OpenSSL would eventually be relicensed under the terms of Apache License 2.0.[43] This process commenced in March 2017,[44] and was complete in 2018.[45]

When creating a handshake, the client could send an incorrectly formatted ClientHello message, leading to OpenSSL parsing more than the end of the message. Assigned the identifier CVE-2011-0014 by the CVE project, this affected all OpenSSL versions 0.9.8h to 0.9.8q and OpenSSL 1.0.0 to 1.0.0c. Since the parsing could lead to a read on an incorrect memory address, it was possible for the attacker to cause a DoS. It was also possible that some applications expose the contents of parsed OCSP extensions, leading to an attacker being able to read the contents of memory that came after the ClientHello.[47]

When using Basic Input/Output (BIO)[48] or FILE based functions to read untrusted DER format data, OpenSSL is vulnerable. This vulnerability was discovered on April 19, 2012, and was assigned the CVE identifier CVE-2012-2110. While not directly affecting the SSL/TLS code of OpenSSL, any application that was using ASN.1 functions (particularly d2i_X509 and d2i_PKCS12) were also not affected.[49]

In handling CBC cipher-suites in SSL, TLS, and DTLS, OpenSSL was found vulnerable to a timing attack during the MAC processing. Nadhem Alfardan and Kenny Paterson discovered the problem, and published their findings[50] on February 5, 2013. The vulnerability was assigned the CVE identifier CVE-2013-0169.

OpenSSL's pseudo-random number generator acquires entropy using complex programming methods. To keep the Valgrind analysis tool from issuing associated warnings, a maintainer of the Debian distribution applied a patch to Debian's variant of the OpenSSL suite, which inadvertently broke its random number generator by limiting the overall number of private keys it could generate to 32,768.[51][52] The broken version was included in the Debian release of September 17, 2006 (version 0.9.8c-1), also compromising other Debian-based distributions, for example Ubuntu. Ready-to-use exploits are easily available.[53] 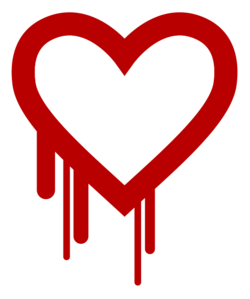 A logo representing the Heartbleed bug

OpenSSL versions 1.0.1 through 1.0.1f have a severe memory handling bug in their implementation of the TLS Heartbeat Extension that could be used to reveal up to 64 KB of the application's memory with every heartbeat[55][56] (CVE-2014-0160). By reading the memory of the web server, attackers could access sensitive data, including the server's private key.[57] This could allow attackers to decode earlier eavesdropped communications if the encryption protocol used does not ensure perfect forward secrecy. Knowledge of the private key could also allow an attacker to mount a man-in-the-middle attack against any future communications. The vulnerability might also reveal unencrypted parts of other users' sensitive requests and responses, including session cookies and passwords, which might allow attackers to hijack the identity of another user of the service.[58]

At its disclosure on April 7, 2014, around 17% or half a million of the Internet's secure web servers certified by trusted authorities were believed to have been vulnerable to the attack.[59] However, Heartbleed can affect both the server and client.

The CCS Injection Vulnerability (CVE-2014-0224) is a security bypass vulnerability that results from a weakness in OpenSSL methods used for keying material.[60]

This vulnerability can be exploited through the use of a man-in-the-middle attack,[61] where an attacker may be able to decrypt and modify traffic in transit. A remote unauthenticated attacker could exploit this vulnerability by using a specially crafted handshake to force the use of weak keying material. Successful exploitation could lead to a security bypass condition where an attacker could gain access to potentially sensitive information. The attack can only be performed between a vulnerable client and server.

This vulnerability (CVE-2015-0291) allows anyone to take a certificate, read its contents and modify it accurately to abuse the vulnerability causing a certificate to crash a client or server. If a client connects to an OpenSSL 1.0.2 server and renegotiates with an invalid signature algorithms extension, a null-pointer dereference occurs. This can cause a DoS attack against the server.

A Stanford Security researcher, David Ramos, had a private exploit and presented it to the OpenSSL team, which then patched the issue.

OpenSSL classified the bug as a high-severity issue, noting version 1.0.2 was found vulnerable.[63]

OpenSSL classified the bug as a high-severity issue, noting only version 1.0.2 was found vulnerable.[64]

In 2009, after frustrations with the original OpenSSL API, Marco Peereboom, an OpenBSD developer at the time, forked the original API by creating Agglomerated SSL (assl), which reuses OpenSSL API under the hood, but provides a much simpler external interface.[65] It has since been deprecated in light of the LibreSSL fork circa 2016.

In April 2014 in the wake of Heartbleed, members of the OpenBSD project forked OpenSSL starting with the 1.0.1g branch, to create a project named LibreSSL.[66] In the first week of pruning the OpenSSL's codebase, more than 90,000 lines of C code had been removed from the fork.[67]

In June 2014, Google announced its own fork of OpenSSL dubbed BoringSSL.[68] Google plans to co-operate with OpenSSL and LibreSSL developers.[69][70][71] Google has since developed a new library, Tink, based on BoringSSL.[72]