Outlook Express, formerly known as Microsoft Internet Mail and News, is a discontinued email and news client included with Internet Explorer versions 3.0 through to 6.0. As such, it was bundled with several versions of Microsoft Windows, from Windows 98 to Windows Server 2003, and was available for Windows 3.x, Windows NT 3.51, Windows 95, Mac System 7, Mac OS 8, and Mac OS 9. In Windows Vista, Outlook Express was superseded by Windows Mail. 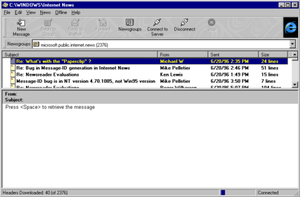 At one point, in a later beta version of Outlook Express 5, Outlook Express contained a sophisticated and adaptive spam filtering system; however this feature was removed shortly before launch. It was speculated on various websites and newsgroups at that time, that the feature was not stable enough for the mass market. Nearly two years later, a similar system, using a similar method of adaptive filtering, appeared as a feature of Microsoft Outlook.

Outlook Express 6 is the last version of the software with Outlook branding. It has a similar layout to Outlook Express 5. It was included with Windows XP.

Builds of "Outlook Express 7" appeared in early builds of Windows Vista when in development as "Longhorn".[5] It relied on WinFS for the management and storage of contacts and other data.[6]

The final version of Vista included a successor to Outlook Express known as Windows Mail (Vista).[7]

Microsoft Outlook and Microsoft Exchange use a proprietary email attachment format called Transport Neutral Encapsulation Format (TNEF) to handle formatting and other features specific to Outlook such as meeting requests. Outlook Express and other email clients are unable to read this format.[8] This can be confusing to Outlook Express users (as well as those who use other email clients) who receive attachments sent from Outlook.

Outlook Express has been prone to a number of problems which can corrupt its files database, especially when the database increases in size due to an increasing number of stored emails and during database compaction. This has led to a thriving market for apps that can back up, restore and recover corrupted files.[9] An open-source project called UnDBX was also created, which seems to be successful in recovering corrupt databases.[10] Microsoft has also released documentation which may be able to correct some non-severe problems and restore access to email messages, without resorting to third-party solutions.[11]

However, with the latest updates applied, Outlook Express now makes backup copies of DBX files prior to compaction. They are stored in the Recycle Bin. If an error occurs during compaction and messages are lost, the DBX files can be copied from the recycle bin.

Outlook Express was one of the earlier email clients to support HTML email and scripts. As a result, emails were commonly infected with viruses.[12][13] Previously, another security flaw was that a script could automatically be opened as an attachment. Another bug was in Outlook Express's attachment handling that allowed an executable to appear to be a harmless attachment such as a graphics file. Opening or previewing the email could cause code to run without the user's knowledge or consent. Outlook Express uses Internet Explorer to render HTML email. Internet Explorer has been subjected to many security vulnerabilities and concerns.

With Outlook Express SP2 (part of Windows XP SP2), Microsoft has tried to correct the security holes. Outlook Express now blocks images inside emails by default.[14][15] It uses only the restricted security zone for HTML email, which disables scripts and imposes restrictions on what web content can be rendered. It also warns when opening potentially malicious attachments.[16]

Outlook Express does not correctly handle MIME,[17] and will not display the body of signed messages inline. Users get a filled email and one attachment (one of the message text and one of the signature) and therefore need to open an attachment to see the email. If the email has been forwarded several times, users need to open attached email messages one inside the other multiple times to reach the parent email message. This bug has still not been rectified. The proper behavior is described in RFC 1847. When replying or forwarding a message to a user who has a digital signature, Outlook Express gives an error and does not allow the user to continue if there is no digital signature installed for the sender.[18]

Outlook Express does not have a documented object model like Microsoft Outlook. Programmatic access to, or control of Outlook Express for custom messaging applications or plugins is not officially documented and supported by Microsoft.[19] IStoreNamespace and IStoreFolder interfaces[20] were documented in 2003, but they are only related to the storage.

Some companies have managed to create their plugins hacking the interface using Windows hooks. A significant one was the PGP plugin because it was the only example of a working plugin whose source code was available (licensed under GPL). By 2003, some companies provided commercial solutions to develop add-ins.[21]

Outlook Express does not have a dedicated spell checker. It can use the spell checkers from Microsoft Office if Office is also installed. However, the Office 2007 spell checkers, except for the French spell checker, are incompatible with Outlook Express. Microsoft has acknowledged this problem,[22] but does not provide any sort of remedy. A solution is to install any pre-Office 2007 proofing tools or use a third party spell-checking app for Outlook Express. Windows Live Mail, which is based on Windows Mail's source code, contains built-in spell checking support (now for US English and numerous other languages) and is freely downloadable for Windows XP.

Glitches and other unusual aspects

Cancelling sending an email while it is being sent does not effectively prevent it from being sent.[23] Similarly, when importing .PST files, cancelling the import while it is in progress merely cancels the import of the current folder and the import resumes with the next folder.[citation needed] Furthermore, Outlook Express only supports .dbx files that are smaller than 2 GB, and may have performance problems when dealing with files approaching that limit.[24]