Pidgin (formerly named Gaim) is a free and open-source multi-platform instant messaging client, based on a library named libpurple that has support for many instant messaging protocols, allowing the user to simultaneously log in to various services from a single application, with a single interface for both popular and obsolete protocols (from AOL to Discord), thus avoiding the hassle of having to deal with a new software for each device and protocol.

The number of Pidgin users was estimated to be over three million in 2007.[2]

Pidgin is widely used for its Off-the-Record Messaging (OTR) plugin, which offers end-to-end encryption. For this reason it is included in the privacy- and anonymity-focused operating system Tails.[3] 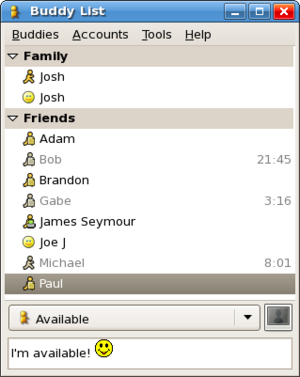 The program was originally written by Mark Spencer, an Auburn University sophomore, as an emulation of AOL's IM program AOL Instant Messenger on Linux using the GTK+ toolkit.[4] The earliest archived release was on December 31, 1998.[5] It was named GAIM (GTK+ AOL Instant Messenger) accordingly. The emulation was not based on reverse engineering, but instead relied on information about the protocol that AOL had published on the web. Development was assisted by some of AOL's technical staff.[4][6] Support for other IM protocols was added soon thereafter.[4]

On 6 July 2015, Pidgin scored seven out of seven points on the Electronic Frontier Foundation's secure messaging scorecard.[7] They have received points for having communications encrypted in transit, having communications encrypted with keys the providers don't have access to (end-to-end encryption), making it possible for users to independently verify their correspondent's identities, having past communications secure if the keys are stolen (forward secrecy), having their code open to independent review (open source), having their security designs well-documented, and having recent independent security audits.[7]

In response to pressure from AOL, the program was renamed to the acronymous-but-lowercase gaim. As AOL Instant Messenger gained popularity, AOL trademarked its acronym, "AIM", leading to a lengthy legal struggle with the creators of GAIM, who kept the matter largely secret.[8]

On April 6, 2007, the project development team announced the results of their settlement with AOL, which included a series of name changes: Gaim became Pidgin, libgaim became libpurple, and gaim-text (the command-line interface version) became finch. The name Pidgin was chosen in reference to the term "pidgin", which describes communication between people who do not share a common language.[9] The name "purple" refers to "prpl", the internal libgaim name for an IM protocol plugin.[10]

Due to the legal issues, version 2.0 of the software was frozen in beta stages. Following the settlement, it was announced that the first official release of Pidgin 2.0.0 was hoped to occur during the two weeks from April 8, 2007.[11] However, Pidgin 2.0 was not released as scheduled; Pidgin developers announced on April 22, 2007 that the delay was due to the preferences directory ".gaim".[12]

Pidgin 2.0.0 was released on May 3, 2007. Other visual changes were made to the interface in this version, including updated icons.[13] 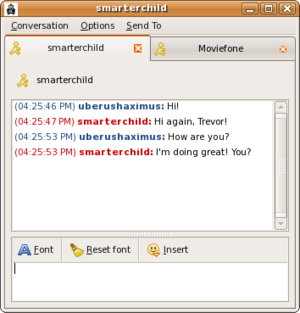 The program is designed to be extended with plugins. Plugins are often written by third-party developers. They can be used to add support for protocols, which is useful for those such as Skype or Discord which have licensing issues (however, the users' data and interactions are still subject to their policies and eavesdropping). They can also add other significant features. For example, the "Off-the-Record Messaging" (OTR) plugin provides end-to-end encryption.

The TLS encryption system is pluggable, allowing different TLS libraries to be easily substituted. GnuTLS is the default, and NSS is also supported. Some operating systems' ports, such as OpenBSD's, choose to use OpenSSL or LibreSSL by default instead.

To reach users as they log on or a status change occurs (such as moving from "Away" to "Available"), Pidgin supports on-action automated scripts called Buddy Pounces to automatically reach the user in customizable ways.

Pidgin supports file transfers for many protocols. It lacks some protocol-specific features like the folder sharing available from Yahoo. Direct, peer-to-peer file transfers are supported over protocols such as XMPP and MSN.

The following protocols are officially supported by libpurple 2.12.0, without any extensions or plugins:[18]

Some XMPP servers provide transports, which allow users to access networks using non-XMPP protocols without having to install plugins or additional software. Pidgin's support for XMPP means that these transports can be used to communicate via otherwise unsupported protocols, including not only instant messaging protocols, but also protocols such as SMS or E-mail.

Various other features are supported using third-party plugins.[28] Such features include:

The mascot of Pidgin is a purple pigeon with the name of The Purple Pidgin.[30]

Other notable software based on libpurple

BitlBee and Minbif are IRCd-like gateways to multiple IM networks, and can be compiled with libpurple to increase functionality.