The term static differentiates SRAM from DRAM (dynamic random-access memory) which must be periodically refreshed. SRAM is faster and more expensive than DRAM; it is typically used for CPU cache while DRAM is used for a computer's main memory.

In 1965,[1] Arnold Farber and Eugene Schlig, working for IBM, created a hard-wired memory cell, using a transistor gate and tunnel diode latch. They replaced the latch with two transistors and two resistors, a configuration that became known as the Farber-Schlig cell. In 1965, Benjamin Agusta and his team at IBM created a 16-bit silicon memory chip based on the Farber-Schlig cell, with 80 transistors, 64 resistors, and 4 diodes.

The first commercial DRAM (built from discrete transistors and capacitors) was produced the same year, 1965.[2] 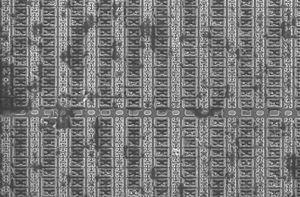 SRAM cells on the die of a STM32F103VGT6 microcontroller as seen by a scanning electron microscope. Manufactured by STMicroelectronics using a 180 nanometre process.

Though it can be characterized as volatile memory SRAM exhibits data remanence.[3]

Many categories of industrial and scientific subsystems, automotive electronics, and similar, contain static RAM which, in this context, may be referred to as ESRAM.[5] Some amount (kilobytes or less) is also embedded in practically all modern appliances, toys, etc. that implement an electronic user interface. Several megabytes may be used in complex products such as digital cameras, cell phones, synthesizers, game consoles, etc.

Hobbyists, specifically home-built processor enthusiasts,[7] often prefer SRAM due to the ease of interfacing. It is much easier to work with than DRAM as there are no refresh cycles and the address and data buses are directly accessible. In addition to buses and power connections, SRAM usually requires only three controls: Chip Enable (CE), Write Enable (WE) and Output Enable (OE). In synchronous SRAM, Clock (CLK) is also included.[citation needed]

Non-volatile SRAM (nvSRAM) has standard SRAM functionality, but they save the data when the power supply is lost, ensuring preservation of critical information. nvSRAMs are used in a wide range of situations – networking, aerospace, and medical, among many others[8] – where the preservation of data is critical and where batteries are impractical.

Pseudostatic RAM (PSRAM) has a DRAM storage core, combined with a self refresh circuit.[9] They appear externally as a slower SRAM. They have a density/cost advantage over true SRAM, without the access complexity of DRAM.

In 1990s, asynchronous SRAM used to be employed for fast access time. Asynchronous SRAM was used as main memory for small cache-less embedded processors used in everything from industrial electronics and measurement systems to hard disks and networking equipment, among many other applications. Nowadays, synchronous SRAM (e.g. DDR SRAM) is rather employed similarly like Synchronous DRAM – DDR SDRAM memory is rather used than asynchronous DRAM. Synchronous memory interface is much faster as access time can be significantly reduced by employing pipeline architecture. Furthermore, as DRAM is much cheaper than SRAM, SRAM is often replaced by DRAM, especially in the case when large volume of data is required. SRAM memory is however much faster for random (not block / burst) access. Therefore, SRAM memory is mainly used for CPU cache, small on-chip memory, FIFOs or other small buffers. 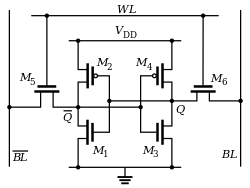 A typical SRAM cell is made up of six MOSFETs. Each bit in an SRAM is stored on four transistors (M1, M2, M3, M4) that form two cross-coupled inverters. This storage cell has two stable states which are used to denote 0 and 1. Two additional access transistors serve to control the access to a storage cell during read and write operations. In addition to such six-transistor (6T) SRAM, other kinds of SRAM chips use 4, 8, 10 (4T, 8T, 10T SRAM), or more transistors per bit.[10][11][12] Four-transistor SRAM is quite common in stand-alone SRAM devices (as opposed to SRAM used for CPU caches), implemented in special processes with an extra layer of polysilicon, allowing for very high-resistance pull-up resistors.[13] The principal drawback of using 4T SRAM is increased static power due to the constant current flow through one of the pull-down transistors.

Four transistor SRAM provides advantages in density at the cost of manufacturing complexity. The resistors must have small dimensions and large values.

This is sometimes used to implement more than one (read and/or write) port, which may be useful in certain types of video memory and register files implemented with multi-ported SRAM circuitry.

Generally, the fewer transistors needed per cell, the smaller each cell can be. Since the cost of processing a silicon wafer is relatively fixed, using smaller cells and so packing more bits on one wafer reduces the cost per bit of memory.

Memory cells that use fewer than four transistors are possible – but, such 3T[14][15] or 1T cells are DRAM, not SRAM (even the so-called 1T-SRAM).

Access to the cell is enabled by the word line (WL in figure) which controls the two access transistors M5 and M6 which, in turn, control whether the cell should be connected to the bit lines: BL and BL. They are used to transfer data for both read and write operations. Although it is not strictly necessary to have two bit lines, both the signal and its inverse are typically provided in order to improve noise margins.

During read accesses, the bit lines are actively driven high and low by the inverters in the SRAM cell. This improves SRAM bandwidth compared to DRAMs – in a DRAM, the bit line is connected to storage capacitors and charge sharing causes the bit line to swing upwards or downwards. The symmetric structure of SRAMs also allows for differential signaling, which makes small voltage swings more easily detectable. Another difference with DRAM that contributes to making SRAM faster is that commercial chips accept all address bits at a time. By comparison, commodity DRAMs have the address multiplexed in two halves, i.e. higher bits followed by lower bits, over the same package pins in order to keep their size and cost down.

The size of an SRAM with m address lines and n data lines is 2m words, or 2m × n bits. The most common word size is 8 bits, meaning that a single byte can be read or written to each of 2m different words within the SRAM chip. Several common SRAM chips have 11 address lines (thus a capacity of 2m = 2,048 = 3d words) and an 8-bit word, so they are referred to as "2k × 8 SRAM".

The dimensions of an SRAM cell on an IC is determined by the minimum feature size of the process used to make the IC.

An SRAM cell has three different states: standby (the circuit is idle), reading (the data has been requested) or writing (updating the contents). SRAM operating in read mode and write modes should have "readability" and "write stability", respectively. The three different states work as follows:

If the word line is not asserted, the access transistors M5 and M6 disconnect the cell from the bit lines. The two cross-coupled inverters formed by M1 – M4 will continue to reinforce each other as long as they are connected to the supply.

In theory, reading only requires asserting the word line WL and reading the SRAM cell state by a single access transistor and bit line, e.g. M6, BL. However, bit lines are relatively long and have large parasitic capacitance. To speed up reading, a more complex process is used in practice: The read cycle is started by precharging both bit lines BL and BL, to high (logic 1) voltage. Then asserting the word line WL enables both the access transistors M5 and M6, which causes one bit line BL voltage to slightly drop. Then the BL and BL lines will have a small voltage difference between them. A sense amplifier will sense which line has the higher voltage and thus determine whether there was 1 or 0 stored. The higher the sensitivity of the sense amplifier, the faster the read operation. As the NMOS is more powerful, the pull-down is easier. Therefore, bit lines are traditionally precharged to high voltage. Many researchers are also trying to precharge at a slightly low voltage to reduce the power consumption.[16][17]

The write cycle begins by applying the value to be written to the bit lines. If we wish to write a 0, we would apply a 0 to the bit lines, i.e. setting BL to 1 and BL to 0. This is similar to applying a reset pulse to an SR-latch, which causes the flip flop to change state. A 1 is written by inverting the values of the bit lines. WL is then asserted and the value that is to be stored is latched in. This works because the bit line input-drivers are designed to be much stronger than the relatively weak transistors in the cell itself so they can easily override the previous state of the cross-coupled inverters. In practice, access NMOS transistors M5 and M6 have to be stronger than either bottom NMOS (M1, M3) or top PMOS (M2, M4) transistors. This is easily obtained as PMOS transistors are much weaker than NMOS when same sized. Consequently, when one transistor pair (e.g. M3 and M4) is only slightly overridden by the write process, the opposite transistors pair (M1 and M2) gate voltage is also changed. This means that the M1 and M2 transistors can be easier overridden, and so on. Thus, cross-coupled inverters magnify the writing process.

RAM with an access time of 70 ns will output valid data within 70 ns from the time that the address lines are valid. But the data will remain for a hold time as well (5–10 ns). Rise and fall times also influence valid timeslots with approximately 5 ns. By reading the lower part of an address range, bits in sequence (page cycle) one can read with significantly shorter access time (30 ns).[18]