Model validation can be based on two types of data: data that was used in the construction of the model and data that was not used in the construction. Validation based on the first type usually involves analyzing the goodness of fit of the model or analyzing whether the residuals seem to be random (i.e. residual diagnostics). Validation based on the second type usually involves analyzing whether the model's predictive performance deteriorates non-negligibly when applied to pertinent new data. 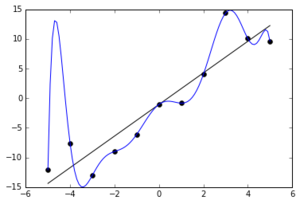 Figure 1.  Data (black dots), which was generated via the straight line and some added noise, is perfectly fitted by a curvy polynomial.

Validation based on only the first type (data that was used in the construction of the model) is often inadequate. An extreme example is illustrated in Figure 1. The figure displays data (black dots) that was generated via a straight line + noise. The figure also displays a curve, which is a polynomial chosen to fit the data perfectly. The residuals for the curve are all zero. Hence validation based on only the first type of data would conclude that the curve was a good model. Yet the curve is obviously a poor model: interpolation, especially between −5 and −4, would tend to be highly misleading; moreover, any substantial extrapolation would be bad.

A model can be validated only relative to some application area.[1][2] A model that is valid for one application might be invalid for some other applications. As an example, consider the curve in Figure 1: if the application only used inputs from the interval [0, 2], then the curve might well be an acceptable model.

When doing a validation, there are three notable causes of potential difficulty, according to the Encyclopedia of Statistical Sciences.[3] The three causes are these: lack of data; lack of control of the input variables; uncertainty about the underlying probability distributions and correlations. The usual methods for dealing with difficulties in validation include the following: checking the assumptions made in constructing the model; examining the available data and related model outputs; applying expert judgment.[1] Note that expert judgment commonly requires expertise in the application area.[1]

Expert judgment can sometimes be used to assess the validity of a prediction without obtaining real data: e.g. for the curve in Figure 1, an expert might well be able to assess that a substantial extrapolation will be invalid. Additionally, expert judgment can be used in Turing-type tests, where experts are presented with both real data and related model outputs and then asked to distinguish between the two.[4]

If the statistical model was obtained via a regression, then regression-residual diagnostics exist and may be used; such diagnostics have been well studied.