Short description: Set of statistical processes for estimating the relationships among variables 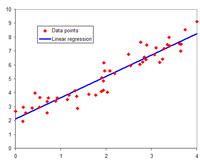 Regression line for 50 random points in a Gaussian distribution around the line y=1.5x+2 (not shown).

In statistical modeling, regression analysis is a set of statistical processes for estimating the relationships between a dependent variable (often called the 'outcome' or 'response' variable, or a 'label' in machine learning parlance) and one or more independent variables (often called 'predictors', 'covariates', 'explanatory variables' or 'features'). The most common form of regression analysis is linear regression, in which one finds the line (or a more complex linear combination) that most closely fits the data according to a specific mathematical criterion. For example, the method of ordinary least squares computes the unique line (or hyperplane) that minimizes the sum of squared differences between the true data and that line (or hyperplane). For specific mathematical reasons (see linear regression), this allows the researcher to estimate the conditional expectation (or population average value) of the dependent variable when the independent variables take on a given set of values. Less common forms of regression use slightly different procedures to estimate alternative location parameters (e.g., quantile regression or Necessary Condition Analysis[1]) or estimate the conditional expectation across a broader collection of non-linear models (e.g., nonparametric regression).

First, regression analysis is widely used for prediction and forecasting, where its use has substantial overlap with the field of machine learning.

The earliest form of regression was the method of least squares, which was published by Legendre in 1805,[4] and by Gauss in 1809.[5] Legendre and Gauss both applied the method to the problem of determining, from astronomical observations, the orbits of bodies about the Sun (mostly comets, but also later the then newly discovered minor planets). Gauss published a further development of the theory of least squares in 1821,[6] including a version of the Gauss–Markov theorem.

The term "regression" was coined by Francis Galton in the 19th century to describe a biological phenomenon. The phenomenon was that the heights of descendants of tall ancestors tend to regress down towards a normal average (a phenomenon also known as regression toward the mean).[7][8] For Galton, regression had only this biological meaning,[9][10] but his work was later extended by Udny Yule and Karl Pearson to a more general statistical context.[11][12] In the work of Yule and Pearson, the joint distribution of the response and explanatory variables is assumed to be Gaussian. This assumption was weakened by R.A. Fisher in his works of 1922 and 1925.[13][14][15] Fisher assumed that the conditional distribution of the response variable is Gaussian, but the joint distribution need not be. In this respect, Fisher's assumption is closer to Gauss's formulation of 1821.

In the 1950s and 1960s, economists used electromechanical desk "calculators" to calculate regressions. Before 1970, it sometimes took up to 24 hours to receive the result from one regression.[16]

In practice, researchers first select a model they would like to estimate and then use their chosen method (e.g., ordinary least squares) to estimate the parameters of that model. Regression models involve the following components:

In various fields of application, different terminologies are used in place of dependent and independent variables.

By itself, a regression is simply a calculation using the data. In order to interpret the output of regression as a meaningful statistical quantity that measures real-world relationships, researchers often rely on a number of classical assumptions. These assumptions often include:

A handful of conditions are sufficient for the least-squares estimator to possess desirable properties: in particular, the Gauss–Markov assumptions imply that the parameter estimates will be unbiased, consistent, and efficient in the class of linear unbiased estimators. Practitioners have developed a variety of methods to maintain some or all of these desirable properties in real-world settings, because these classical assumptions are unlikely to hold exactly. For example, modeling errors-in-variables can lead to reasonable estimates independent variables are measured with errors. Heteroscedasticity-consistent standard errors allow the variance of [math]\displaystyle{ e_i }[/math] to change across values of [math]\displaystyle{ X_i }[/math]. Correlated errors that exist within subsets of the data or follow specific patterns can be handled using clustered standard errors, geographic weighted regression, or Newey–West standard errors, among other techniques. When rows of data correspond to locations in space, the choice of how to model [math]\displaystyle{ e_i }[/math] within geographic units can have important consequences.[17][18] The subfield of econometrics is largely focused on developing techniques that allow researchers to make reasonable real-world conclusions in real-world settings, where classical assumptions do not hold exactly.

Adding a term in [math]\displaystyle{ x_i^2 }[/math] to the preceding regression gives:

Returning our attention to the straight line case: Given a random sample from the population, we estimate the population parameters and obtain the sample linear regression model: 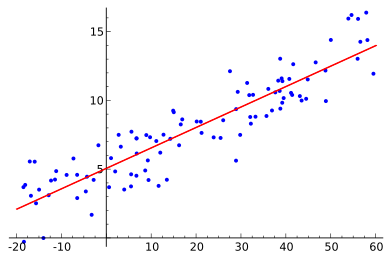 Illustration of linear regression on a data set.

In the case of simple regression, the formulas for the least squares estimates are

Under the assumption that the population error term has a constant variance, the estimate of that variance is given by:

The standard errors of the parameter estimates are given by

Under the further assumption that the population error term is normally distributed, the researcher can use these estimated standard errors to create confidence intervals and conduct hypothesis tests about the population parameters.

The least squares parameter estimates are obtained from [math]\displaystyle{ p }[/math] normal equations. The residual can be written as

The normal equations are

In matrix notation, the normal equations are written as

Once a regression model has been constructed, it may be important to confirm the goodness of fit of the model and the statistical significance of the estimated parameters. Commonly used checks of goodness of fit include the R-squared, analyses of the pattern of residuals and hypothesis testing. Statistical significance can be checked by an F-test of the overall fit, followed by t-tests of individual parameters.

Interpretations of these diagnostic tests rest heavily on the model's assumptions. Although examination of the residuals can be used to invalidate a model, the results of a t-test or F-test are sometimes more difficult to interpret if the model's assumptions are violated. For example, if the error term does not have a normal distribution, in small samples the estimated parameters will not follow normal distributions and complicate inference. With relatively large samples, however, a central limit theorem can be invoked such that hypothesis testing may proceed using asymptotic approximations.

Limited dependent variables, which are response variables that are categorical variables or are variables constrained to fall only in a certain range, often arise in econometrics.

The response variable may be non-continuous ("limited" to lie on some subset of the real line). For binary (zero or one) variables, if analysis proceeds with least-squares linear regression, the model is called the linear probability model. Nonlinear models for binary dependent variables include the probit and logit model. The multivariate probit model is a standard method of estimating a joint relationship between several binary dependent variables and some independent variables. For categorical variables with more than two values there is the multinomial logit. For ordinal variables with more than two values, there are the ordered logit and ordered probit models. Censored regression models may be used when the dependent variable is only sometimes observed, and Heckman correction type models may be used when the sample is not randomly selected from the population of interest. An alternative to such procedures is linear regression based on polychoric correlation (or polyserial correlations) between the categorical variables. Such procedures differ in the assumptions made about the distribution of the variables in the population. If the variable is positive with low values and represents the repetition of the occurrence of an event, then count models like the Poisson regression or the negative binomial model may be used.

When the model function is not linear in the parameters, the sum of squares must be minimized by an iterative procedure. This introduces many complications which are summarized in Differences between linear and non-linear least squares.

Regression models predict a value of the Y variable given known values of the X variables. Prediction within the range of values in the dataset used for model-fitting is known informally as interpolation. Prediction outside this range of the data is known as extrapolation. Performing extrapolation relies strongly on the regression assumptions. The further the extrapolation goes outside the data, the more room there is for the model to fail due to differences between the assumptions and the sample data or the true values.

It is generally advised that when performing extrapolation, one should accompany the estimated value of the dependent variable with a prediction interval that represents the uncertainty. Such intervals tend to expand rapidly as the values of the independent variable(s) moved outside the range covered by the observed data.

For such reasons and others, some tend to say that it might be unwise to undertake extrapolation.[21]

However, this does not cover the full set of modeling errors that may be made: in particular, the assumption of a particular form for the relation between Y and X. A properly conducted regression analysis will include an assessment of how well the assumed form is matched by the observed data, but it can only do so within the range of values of the independent variables actually available. This means that any extrapolation is particularly reliant on the assumptions being made about the structural form of the regression relationship. Best-practice advice here is that a linear-in-variables and linear-in-parameters relationship should not be chosen simply for computational convenience, but that all available knowledge should be deployed in constructing a regression model. If this knowledge includes the fact that the dependent variable cannot go outside a certain range of values, this can be made use of in selecting the model – even if the observed dataset has no values particularly near such bounds. The implications of this step of choosing an appropriate functional form for the regression can be great when extrapolation is considered. At a minimum, it can ensure that any extrapolation arising from a fitted model is "realistic" (or in accord with what is known).

Although the parameters of a regression model are usually estimated using the method of least squares, other methods which have been used include:

For a more comprehensive list, see Software:List of statistical packages.