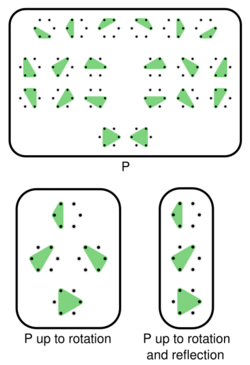 This figure of speech is mostly used in connection with expressions derived from equality, such as uniqueness or count. For example, x is unique up to R means that all objects x under consideration are in the same equivalence class with respect to the relation R.

Moreover, the equivalence relation R is often designated rather implicitly by a generating condition or transformation. For example, the statement "an integer's prime factorization is unique up to ordering" is a concise way to say that any two lists of prime factors of a given integer are equivalent with respect to the relation R that relates two lists if one can be obtained by reordering (permutation) from the other.[1] As another example, the statement "the solution to an indefinite integral is sin(x), up to addition by a constant" tacitly employs the equivalence relation R between functions, defined by fRg if f−g is a constant function, and means that the solution and the function sin(x) are equal up to this R. In the picture, "there are 4 partitions up to rotation" means that the set P has 4 equivalence classes with respect to R defined by aRb if b can be obtained from a by rotation; one representative from each class is shown in the bottom left picture part.

Equivalence relations are often used to disregard possible differences of objects, so "up to R" can be understood informally as "ignoring the same subtleties as R does". In the factorization example, "up to ordering" means "ignoring the particular ordering".

Further examples include "up to isomorphism", "up to permutations", and "up to rotations", which are described in the Examples section.

In informal contexts, mathematicians often use the word modulo (or simply "mod") for similar purposes, as in "modulo isomorphism".

A simple example is "there are seven reflecting tetrominoes, up to rotations", which makes reference to the seven possible contiguous arrangements of tetrominoes (collections of four unit squares arranged to connect on at least one side) and which are frequently thought of as the seven Tetris pieces (O, I, L, J, T, S, Z). One could also say "there are five tetrominoes, up to reflections and rotations", which would then take into account the perspective that L and J (as well as S and Z) can be thought of as the same piece when reflected. The Tetris game does not allow reflections, so the former statement is likely to seem more relevant.

To add in the exhaustive count, there is no formal notation for the number of pieces of tetrominoes. However, it is common to write that "there are seven reflecting tetrominoes (= 19 total[2]) up to rotations". Here, Tetris provides an excellent example, as one might simply count 7 pieces × 4 rotations as 28, but some pieces (such as the 2×2 O) obviously have fewer than four rotation states. 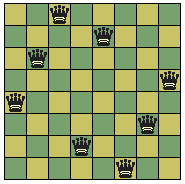 A solution of the eight queens problem

If, in addition to treating the queens as identical, rotations and reflections of the board were allowed, we would have only 12 distinct solutions up to symmetry and the naming of the queens, signifying that two arrangements that are symmetrical to each other are considered equivalent (for more, see Eight queens puzzle § Solutions).

The regular n-gon, for given n, is unique up to similarity. In other words, if all similar n-gons are considered instances of the same n-gon, then there is only one regular n-gon.

In group theory, one may have a group G acting on a set X, in which case, one might say that two elements of X are equivalent "up to the group action"—if they lie in the same orbit.

A hyperreal x and its standard part st(x) are equal up to an infinitesimal difference.

In computer science, the term up-to techniques is a precisely defined notion that refers to certain proof techniques for (weak) bisimulation, and to relate processes that only behave similarly up to unobservable steps.[3]