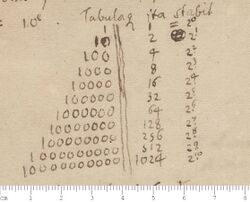 The neat coincidence that 210 is nearly equal to 103 provides the basis of a technique of estimating larger powers of 2 in decimal notation. Using 210a+b ≈ 2b103a(or 2a≈2a mod 1010floor(a/10) if "a" stands for the whole power) is fairly accurate for exponents up to about 100. For exponents up to 300, 3a continues to be a good estimate of the number of digits.

In the case of larger exponents, the relationship becomes increasingly inaccurate, with errors exceeding an order of magnitude for a ≥ 97. For example:

In measuring bytes, 1024 is often used in place of 1000 as the quotients of the units byte, kilobyte, megabyte, etc. In 1999, the IEC coined the term kibibyte for multiples of 1024, with kilobyte being used for multiples of 1000.

Special use in computers

In binary notation, 1024 is represented as 10000000000, making it a simple round number occurring frequently in computer applications.

In the Rich Text Format (RTF), language code 1024 indicates the text is not in any language and should be skipped over when proofing. Most used languages codes in RTF are integers slightly over 1024.